In 1986 Ronald Reagan made a “deal” with Democrats and amnestied millions of humans in the United States illegally, most of them from Mexico.

The “deal” was the border would be permanently secured while “giving” Democrats more voter support.

Some may argue that is a bit simplistic.

The truth is always simple and the aforementioned statement is one hundred percent correct.

In regards to Reagan’s opinion of this event it was “reported” later that he considered this deal a “mistake” and I have heard many Reagan supporters make this statement.  Whether Reagan said this is irrelevant as his decision to sign this bill changed the United States forever.

Millions of humans were granted the ultimate gift (American Citizenship) based solely on their willingness to illegally enter the United States.

The propaganda has been strong for decades and again most believe “immigration” of “undocumented aliens” has been good for the citizens of America.

When humans of any country are rewarded for doing the wrong thing they will continue down that path.

Reagan probably thought he was securing America for generations to come.  What he did was create a gigantic magnet that changed California almost overnight. Gangs like La Raza and MS-13 became entrenched in the Golden State over time and tentacled out into the rest of the country.  If that wasn’t bad enough organized crime from Russia, China, Vietnam, Guatemala, Honduras, and of course Mexico continued to grow and under the Obama administration groups like CAIR, the Muslim Brotherhood et al, and the Nation of Islam became stronger and better populated.

The “reported” number of humans here illegally is ten to twelve million.

The number is probably closer to forty million.

A society that is created on the Rule of Law must enforce those laws otherwise society breaks down.

This is exactly what is happening.

There is no doubt ALL of our systems have been corrupted in America.  Some States are attempting to fight back (Virginia just removed most of its voting machines although a pessimist might say they are trying to “remove the proof”) while others like Illinois and California are now openly violating Federal Law and declaring themselves to be Sanctuary States.

Technically this is sedition, but as we’ve seen if humans on one side, will not stop humans on the other side from abusing them, then the abuse continues until history is written by the abusers.

Many will ask how we have gotten this far.  The constant usage of the Dollar to “paper over” decisions has allowed this for decades.

In California we provide every means of support including legal counsel to humans here illegally.  Our courts, jails, and prisons are so overwhelmed we are now changing the designation of many crimes and releasing dangerous and violent humans back onto our streets.

In the little town where I reside we have had murder, kidnapping, and grand theft auto.  In just the last six months we’ve experienced one attempted bank robbery, one successful, and a few days ago the local Walgreens had its doors smashed in by a vehicle followed by a chain being tied around the ATM and dragged out the door.

South of us the City of Sacramento is now PAYING “gangbangers” to stop killing each other.

Yes that is correct, and just like Amnesty, the City of Sacramento will learn (for many the hard way) that paying evil to not commit evil acts, only attracts, more bad actors.

Amnesty for a few million “aliens” has now brought us tens of millions of illegals.

It is a sad but true fact that the Rule of Law is no longer in place in these United States.

When a County Sheriff is railroaded by a Federal Court Judge for doing his DUTY the rules don’t apply anymore. When it takes the President of the United States to save the Sheriff from being locked up there is no law.

Very few of us have Get Out Of Jail Free cards, not that we or Sheriff Arpaio should need them.

President Trump has been compared to former President Reagan.

In many cases this comparison is correct.

Reagan thought “compassion” was more important than the law and that making a deal with the devil would be justified in the end.

Reagan didn’t suffer for this.

Americans did and do.

Higher property and identity crime, suppressed wages, more pollution, not to mention rape and murder have all risen because of one decision in 1986.

We stand here again, thirty plus years later, putting our trust in the new Reagan to “build a big beautiful wall” and deport all the illegals, as he said he would.

As I’ve stated many times, and I’m sure you well know, you were elected to shut the border, remove all illegals, and enforce the Rule of Law.

Punting Obama’s illegal action known as DACA to Congress was hopefully only a mistake, not a harbinger of another Reagan deal.

Those of us who put you there are not sycophants, followers, or Trumpians.

We supported you because of the things you said you would do. Had you never spoken about the border my strong opinion is that Ted Cruz or Ben Carson would have been the Republican nominee.

You however stepped directly into the fray, and started to fight on the one issue everyone, who cares about America, knew had to be addressed.

We respected you for this and put you in the Oval Office despite some “interesting” statements to say the least. Most of us knew there would be things you would do and decisions you might make that we would disagree with.

For example continuing the war in Afghanistan.

It is my opinion that we shouldn’t be there anymore.  It is also my opinion that one American soldier is worth more than the entire country of Afghanistan but I also know this is a difficult situation.  I don’t agree with your decision but I will continue to support you in spite of it.

It is very clear the Republican and Democratic “swamp dwellers” hate and fear you.

We hate them as well and support you even more because of this however your proclivity or “willingness” to “make a deal” has many of us concerned and rightly so.

We cannot have another Reagan “deal”.

If this is done you will be ignoring the primary reason you were elected.

You will also be strengthening La Raza, MS-13, CAIR, and the Muslim Brotherhood.

Whether you believe that or not is irrelevant.

You will also strengthen the “Democratic-Socialist” base, which we need dramatically less of, not more.

I want to be clear President Trump.

We put you there to fix Reagan’s mistake.

It is my opinion that the only reason Paul Ryan hasn’t brought Impeachment charges to the House floor is because he is afraid of We The People and our very physical response to that.

He’s smarter than he looks, and as I’ve stated in the past if he does try this, I will personally arrive in D.C.

I won’t be alone.

With that said a DACA amnesty, or any amnesty for that matter, closes the door on my support.

If you will not ENFORCE OUR LAWS and KEEP YOUR WORD you are on your own.

The sharks have been in the water for a while.

Your decision to swim with them isn’t wise. When they attack, and they will, we aren’t coming in after you.

What’s next?  A helicopter drop of cash to Iran in the middle of the night?

The debt ceiling is being raised.

Common Core is still being taught.

Janet Yellen is still crushing the Dollar and feeding her friends.

The Dems, whom you are making deals with, have called you a racist, bigoted, homophobic Nazi and your decision is to give them more voters?

With your support of criminality the Dems will gain votes.

On the other hand you will lose mine.

I guarantee you I won’t be alone.

“If I was President you’d be in jail.”

“I will build a big beautiful wall and Mexico will pay for it.”

“American children have dreams too.”

Hillary’s on a book tour calling you a stalker.

The wall is non-existent.

The only thing in Mexico getting paid is their citizens, here illegally, working in America, and that money leaves the United States on a daily basis.

In other words we are paying them.

Children, American and otherwise, are still being trafficked through the border.

Their lives are being ruined or ended.

You are supposed to Make America Great Again.

In closing I will reference a man who ended his days in exile while quoting another famous Reagan.

Amnesty, in any form, is your Waterloo.

Sat Sep 23 , 2017
Editor’s Note: Senator John McCain died Saturday at the age of 81. Below is the September 24, 2017 report from Lesley Stahl on McCain. For more from Stahl’s interview with McCain, click here. On Friday, John McCain announced that he will once again vote against repeal of the Affordable Care […] 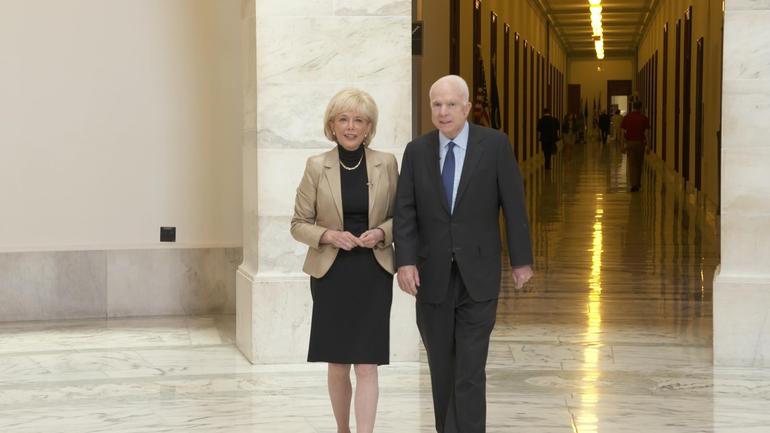