Over the years I’ve received a vast amount of information from wonderful citizens across America. Most of it factual, some speculation, all of it well intended and with one purpose.

Everything sent to me is always verified to the best of my ability otherwise it is never used regardless of how well intentioned.

Sadly, as the behavior of too many in today’s world becomes crazier, the stories are easier to believe and harder to verify.

Of even greater insanity, are those unwilling to accept facts, based solely on their “political” views.

Added to these absurdities is of course the “virus” known as the RONA.

Covid 19 has cured the flu and is crushing Freedom with every vax inserted body.

Report after report of tens of thousands of “side effects” known as strokes, heart attacks and death continue to roll in as oppressive governments around the world force poison into healthy bodies.

Now a United States Army Flight Surgeon has reportedly grounded “vaccinated” pilots due to a FATALITY and two other “pulmonary embolism events that happened within 48 hours of their vaccination”. The Lieutenant Colonel stated “I cannot attribute this result to anything other than the Covid 19 vaccine as the source of these events.”

These same shots have been given to commercial pilots as well, and the overwhelming majority of private sector aviators in America are older and nutritionally devoid, in comparison to their military counterparts.

In other words they are in dramatically worse shape than military pilots, yet as you read this now, vaccinated pilots all over the United States and around the world are flying planes.

As this is taking place the Biden Administration is applying as much pressure as they can, to force the rest of our pilots in and out of the military, to be vaxxed and the only way they are getting away with this is too many citizens accepting lies as truth.

As I stated last week before the vax was implemented I knew of no one who’d even had the RONA.

Now I personally know multiple people who have been hospitalized or died just in the last month.

There seems to only be a few question lefts.

How many planes have to crash before the world awakens?

How many have to die before Americans fight?

In a country filled with people willing to take any drug known to man to “survive” the irony is stunning.

“Mr. Play-It-Safe was afraid to fly
He packed his suitcase and kissed his kids goodbye
He waited his whole damn life to take that flight
And as the plane crashed down
He thought, “Well, isn’t this nice?

And isn’t it ironic?

Are you thinking at all?

Sun Oct 10 , 2021
A customer uses her phone’s torch light in a grocery store during a power cut near Bhamdoun, Lebanon, October 9, 2021. REUTERS/Mohamed Azakir October 10, 2021 DUBAI (Reuters) – Lebanon’s power supplies were back to normal on Sunday after a blackout the previous day when the country’s two biggest power […] 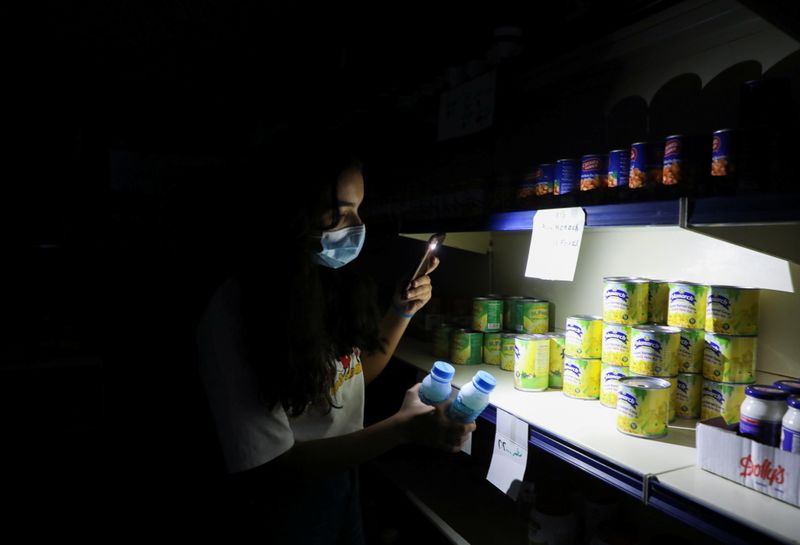