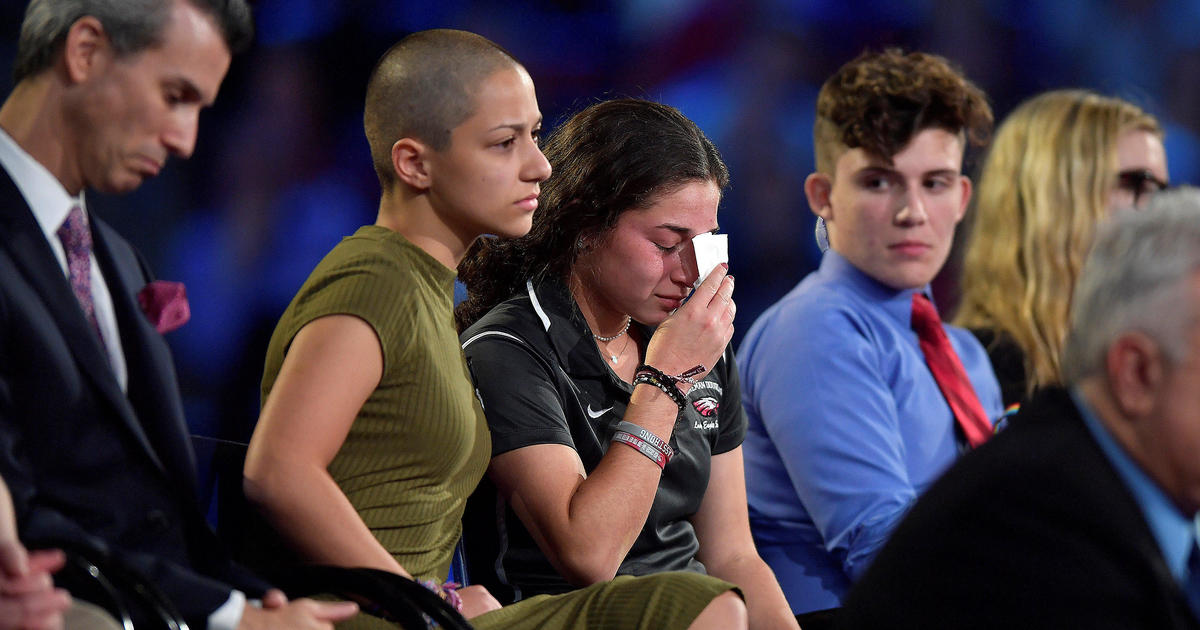 To scroll through the Twitter feeds of students from Marjory Stoneman Douglas High School from the past week is to relive their horror.

As the shooting at their Parkland, Florida school unfolded, Americans saw videos of bloodied students sprawled across classroom floors amid loud gunfire; screenshots of potentially final text exchanges with family members and loved ones; photos and videos from hiding places under desks and tables and unedited streams of thought from teenagers living through a school shooting. The videos came in a trickle at first, then a flood: Snippets from Snapchat and Twitter, testimonials on Instagram and Facebook. By the time they were done uploading, 17 people at their school had been murdered by a former student with an AR-15 assault rifle.

The Douglas students, like high schoolers everywhere, grew up in the age of smartphones. And that meant that on the day of the shooting, the students were live-tweeting and snapping what they were living through. Their unvarnished content captured America’s imagination.

Tweets from the shooting quickly went viral and drove coverage in the national media. For these teenage students born in the mid-2000s, communicating with their smartphones, and the language that comes with it, is instinctual. And their fluency in the vernacular of the internet has prepared them for this moment, transforming them into some of the most potent political activists in the country.

Instagram and Snapchat are the preferred platforms for teenagers — apps built to capture and communicate moments with added context. While the results can sometimes be ephemeral and silly, in moments of trauma they can also be unforgettable. Like that chaotic 10-second video from inside Marjory Stoneman High School of gunshots blasting, smoke filling a classroom, and children wailing. It was recorded on Snapchat, posted on other platforms, and played over and over on national television broadcasts.

In the aftermath of the shooting, poised and passionate Douglas students looked straight into television news cameras with emotional, tearful pleas to the public and the president to take action. They’ve taken cues from web-driven grassroots political movements that have unfolded in their formative years: Black Lives Matter, the Bernie Sanders campaign, even Mr. Trump’s social media-driven presidential bid.

“These kids are making moral arguments on a fundamental level at the age of 16 and that’s pretty amazing,” said Karthik Ganapathy, the press secretary for Bernie Sanders’ presidential campaign. “That’s where the overlap is in my mind.”

A group of the high schoolers holed up in a Parkland living room to organize the “Never Again MSD” movement the weekend after the massacre. Rallies, op-eds, speeches, hashtags, GoFundMes, and a march on Washington soon followed. Inspired, other Florida students en masse began organizing. Snapchat’s Maps feature illustrated the efforts high schoolers nationwide walking out of high schools in protest.

The students utilized Twitter to connect with the national news media, which has grown dependent on the social media app as a news coverage tool. When lawmakers and public figures in Washington D.C. spoke of “thoughts and prayers,” the students tweeted their rejection of platitudes they found to be empty and demanded action instead.

“An 18 year old kid, who literally everyone knew was troubled, was allowed to have multiple f***ing guns but yeah let’s just send out prayers cause that always seems to do so f***ing much,” @recklex tweeted.

The students seemed so media-savvy that they spawned conspiracy theories from pro-Trump conspiracy theorists. On Tuesday, various far-right blogs falsely accused 17-year-old student David Hogg of being a phony “crisis actor” who showed up to capitalize on the tragedy.

On Monday night, Rep. Ted Deutch, D-Florida, visited the leaders of the “Never Again” movement for a meeting. When he asked them would he could do to help, they told him to keep tweeting.

“Twitter leveled the difference between participants,” said Malcolm Harris, the author of “Kids these Days: Human Capital and the Making of Millennials.”

“A teenager in Florida can challenge elected representatives, news hosts, whoever. And if they’ve got the truth and rhetoric on their side, they can make a fair challenge to be heard.”

Harris said that if Trump ultimately decides to lash back at a group of teenagers on Twitter — he has a habit of tweeting attacks at political opponents — “he’s probably going to lose.”

On Wednesday, at a CNN town hall on gun control, skeptical high schoolers grilled politicians on their legislative records and ties to the National Rifle Association, a reminder that young people have an contempt for phoniness and poll-tested messaging.

“We’re going to make you stare this in the face,” Ganapathy said of the students’ strategy. “This is confrontational. This is uncomfortable. This is going to be a reckoning. We want our friends’ deaths to mean something, and that is clear in everything that they are doing. There is no teaching here. They are just being incredibly effective.”

But as University of North Carolina sociologist Zeynep Tufekci has documented, the intersection of activism and technology has often set up political movements for failure.  Social media and smartphones have facilitated rapid organization but not durability, she argues, because web-driven movements fail to develop strong leadership and strategies.

“The capabilities that fueled their organizing prowess sometimes also set the stage for what later tripped them up, especially when they were unable to engage in the tactical and decision-making maneuvers all movements must master to survive,” she writes in her book “Twitter and Tear Gas: The Power and Fragility of Networked Protest.”

Now, building a movement that endures is even more challenging, as we live in a world in which technology itself has a kind of compressing effect on the way we experience events. A University of Wisconsin study has found that in recent years, the amount of time dedicated to “thoughts and prayers” and public grief on Twitter after a mass shooting has dwindled.

But a promising sign for activists is that the “staying power of the gun-control advocates seemed to gradually” grow on Twitter, Jon C. W. Pevehouse, a political science professor involved with the study, told the Washington Post. The wildfire speed of the #NeverAgain campaign, fueled by the savvy social media prowess, might be a serious catalyst for change when it comes to enacting new gun laws.

It also remains unclear if the cable-news-watching president is listening to the student activists. When asked during the White House briefing on Thursday whether or not Mr. Trump had watched the CNN Town Hall on Gun Control that three million Americans tuned into on Wednesday night, deputy press secretary Raj Shah said he hadn’t asked the president, who’s made it clear that he’s no fan of CNN.

And despite his “listening” approach to coming up with government fixes, the president has endorsed policy prescriptions that he himself injected into the bloodstream over the past two days: arming nearly one million teachers, putting more armed veterans or officers in schools, and changing the name of active shooter drills to something less threatening.

“If I was invited to the White House, however, given a reasonable amount of time, I would definitely go,” Hogg added.

Fri Feb 23 , 2018
Qualcomm (NASDAQ: QCOM) recently raised its bid for NXP Semiconductors (NASDAQ: NXPI) to $127.50 per share in cash, up from its original offer of $110 last October. The new deal, which is worth about $44 billion, could scramble Broadcom‘s (NASDAQ: AVGO) attempted hostile takeover of Qualcomm. Previously on Qualcomm vs. […]