To say this last week was interesting wouldn’t do it justice. It wasn’t any one thing in particular rather the culmination of events, that drew my attention. After having an interesting discussion with a Sunni Muslim, a wayward homeless traveling musician and finally a friend, I arrived at the same conclusion I’ve had for a while.

It’s just a matter of time.

To those Liberals who don’t understand what they’ve just read.

It will just be a waste of my words.

You will never comprehend love of country.

Love of these United States.

To my fellow Americans.

We have work to do.

While our work continues Nancy Pelosi vacations in Hawaii under Secret Service Protection while another member of law enforcement was murdered again by an enemy foreign combatant otherwise known as an illegal.

Some form of abuse by “illegals” on Americans happens every day.

As Democrats and RINOS continue to protect each other more children are trafficked, raped and murdered through our open border.

The aforementioned Sunni Muslim, Omar, provoked thought as he told me over and over how much he loved America.

I don’t know if he really does but at least he’s willing to say so, unlike Democratic-Socialist-Liberal-Progressives.

He also said Saudi Arabia and Iran are actually in cahoots. Cahoots is my word but it is difficult to argue with his assessment as they are both members of OPEC.

That Sunni/Shiite thing only seems to matter when they think it benefits them.

Yes, I’m glad you asked, the same Iran that Obama’s Democrats gave 150 BILLION dollars to, yes BILLION with a B, but can’t find 5 BILLION for a wall that will save American lives.

Mullah Barack sent our tax dollars to the Ayatollah who then sent them to Hamas, as though Obama sending his minions to infiltrate Israel’s elections wasn’t enough.

Speaking of Hamas supporters good ol Alexandria Ocasio-Cortez is garnering even more attention as the SheBigot continues to try and sell herself as a poor misunderstood servant of the People.

Take a break there OC…you deserve it.

I think the situation speaks for itself.

The SheBigot told the Stupid Humans to vote for her, because she isn’t white and to vote against her opponent, because he is.

This is exactly what the sheep did.

I know the Libs (told you to stop) won’t understand when I reference Newtonian Law so I will say it this way.

What goes around comes around Alex and it’s been my experience when it comes back around “it” takes no prisoners.

Okay let me try it this way.

You don’t tug on Superman’s cape, you don’t spit into the wind, you don’t pull that mask off that old lone ranger and you don’t mess around with Slim.

Still don’t get it huh?

You want me to use Barbara Streisand lyrics to explain it?

I’d try but it would be impossible for me to be that obtuse or obnoxious.

I lost you again with obtuse didn’t I Hillary Voters.

I’ll get you a coloring book and comfort animal later.

The homeless traveling musician (Teresa) was young (31) but the road and what sounded like a brutal childhood had aged her well beyond three decades. Still, she had an energy that resonated, as well as two dogs.

We spoke for about 10 minutes as she fed them and thanked me for the dog treats I’d given her. Her animals were in great shape and appeared very well cared for. She on the other hand will probably not see 40 if she doesn’t make some serious adjustments. I handed her a bottle of water and some founding fathers and told her to be safe on her way to Chico.

If I was choosing teams I’d choose Teresa seven days a week and twice on Sunday over Alex from the Bronx.

Finally a friend of mine called and ranted about the craziness of the world. He does this every few weeks and because he is a good man and an even better friend, I provide what I rarely do anymore.

Now to be accurate my friend was 100% correct. I agreed wholeheartedly but that loop in our heads that sometimes takes over can be exhausting to others as the same topics get covered over and over again.

Today though he had a new thought to share with me. He told me he was in a group and someone started to talk about California, Trump and the Death Penalty.

My buddy said California used to be a great State until all the greed, stupidity and Liberals took over. He corrected them quite harshly (which is the best way to correct Progressives) about President Trump and said he is doing a great job and he better get that wall built.

“I hope he keeps the government shut down until we get what we want,” he said.

He finished by telling the group he was against the electric chair.

Finally the California Liberals heard something they could agree with.

My friend looked them right in the eyes and said the electric chair was horrible.

The Liberals were aghast. After a few seconds one delicate flower asked my buddy if he was willing to “flip the switch himself.”

“Absolutely,” he replied. “I’d make it a televised event.”

That possibility is closer than America realizes.

Much closer and will start with the career criminals.

The ones sitting in Washington D.C..

Keep it shut down Mr. President.

It’s well past time to draw the line.

Sun Dec 30 , 2018
Members of a Yemeni coast guard force ride on the back of a petrol truck during their deployment as part of a U.N.-sponsored peace agreement signed in Sweden earlier this month, at the Red Sea city of Hodeidah, Yemen December 29, 2018. REUTERS/Abduljabbar Zeyad December 30, 2018 DUBAI (Reuters) – […] 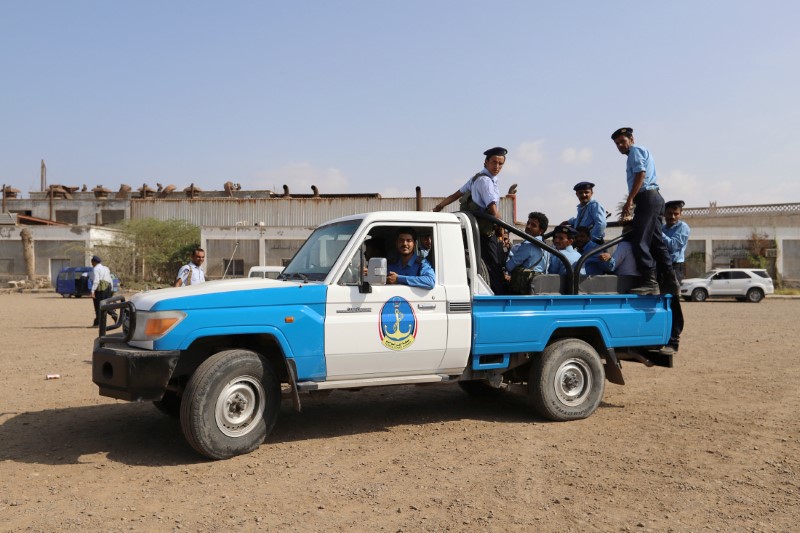