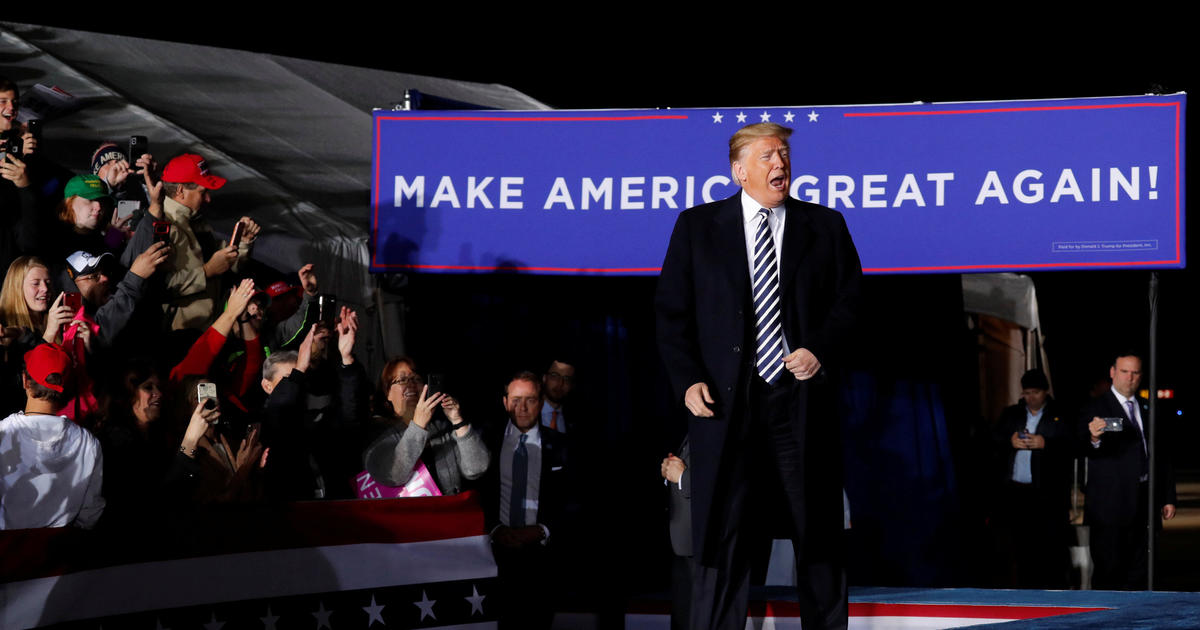 President Trump and Vice President Mike Pence joined forces at a rally in Indianapolis, Indiana, Friday evening, the first of two that Mr. Trump will attend in Indiana before Election Day. The campaign appearance supporting Indiana Republican candidates, particularly Senate candidate Mike Braun, was Mr. Trump’s second rally of the day, after appearing in West Virginia earlier in the afternoon and giving a very similar speech. Pence, the former governor of Indiana, has also been making a series of campaign appearances in recent days on behalf of Republican candidates around the country.

The president has largely focused on illegal immigration in the days before the election, a topic which could motivate Mr. Trump’s base to turn out and vote in the midterms even though he is not on the ballot. This rally included familiar rhetoric about immigration, and particularly a migrant caravan en route to the U.S. from Central America that is weeks away from arriving at the border.

“The Democrats want to invite caravan after caravan,” Mr. Trump said, falsely, adding that Democrats want caravans “full of illegal aliens to flood into our country.” He also discussed how he believed the caravan will help motivate Republicans to turn out on election day. “Between Justice Kavanaugh and the caravan, you people are energized,” he said, referring to the confirmation of Supreme Court Justice Brett Kavanaugh, who had been accused of sexual assault.

“A blue wave will equal a crime wave, and a red wave will equal law and safety,” Mr. Trump said. Addressing a perceived weak spot of his — Mr. Trump’s approval among women — he said that border security was a women’s issue, because “they want security.” He also repeated the untrue claim that he won women in 2016. In fact, he won white women, but women overall voted for Hillary Clinton.

At one point, Mr. Trump brought famed and beloved former head coach of the Indiana Hoosiers. He briefly led the crowd in a chant of “Go get ’em, Donald!”

Pence spoke before Mr. Trump, as sort of a warm-up act for the president, amping up the crowd by discussing administration accomplishments.

“I’m here today because I stand with President Trump,” Pence said. “We’re here because President Trump and I stand shoulder to shoulder with the next great senator of Indiana, Mike Braun.” He added that “the time has come to vote ‘no’ on Joe,” referring to Democratic Sen. Joe Donnelly.

Mr. Trump also attacked Donnelly, resurrecting a moniker he had given the senator in earlier rallies: “Sleepin’ Joe.” “It’s no surprise Joe Donnelly is holding a rally this weekend with Barack H. Obama,” Mr. Trump said, writing out Obama’s middle initial, which stands for “Hussein.” Mr. Trump was the chief promoter of the birther conspiracy theory, which posited that Obama was not born in the United States.

Mr. Trump has escalated his campaign appearances and his incendiary rhetoric in the days leading to the midterms, rallying in states which he won in 2016. At a rally in Missouri on Thursday, Mr. Trump said that the Pittsburgh synagogue massacre suspect and the man accused of sending bombs in the mail to prominent Democratic figures managed to slow the political momentum of Republicans before the midterm elections.

“We did have two maniacs stop a momentum that was incredible, because for seven days nobody talked about the elections,” he said. “It stopped a tremendous momentum.” He added, “More importantly, we have to take care of our people, and we don’t care about momentum when it comes to a disgrace like just happened to our country.”

“But it did nevertheless stop a certain momentum, and now the momentum is picking up,” Mr. Trump said.

In addition to his usual claims that Democrats support “open borders,” the president has largely focused on his rhetoric on the caravan of migrants, most of whom are seeking asylum.

At a press conference regarding immigration on Thursday, Mr. Trump discussed the decision to send 15,000 military troops to the border. He said the military will not tolerate violence at the border, and any rocks thrown at the military will be treated like “a firearm.”

When a reporter asked him about this, the president said he has told the U.S. military to “consider it a rifle.”

“We will consider that the maximum that we can consider that, because they’re throwing rocks viciously and violently,” he said. “You saw that three days ago.  Really hurting the military.  We’re not going to put up with that.  If they want to throw rocks at our military, our military fights back.  We’re going to consider — and I told them, consider it a rifle.  When they throw rocks like they did at the Mexico military and police, I say, consider it a rifle.”

At the rally on Thursday, Mr. Trump also criticized the Democrats on immigration, saying they “are doing everything in their power to delay, to stop” the wall from being built. “And we need it more than ever,” he added.

Fri Nov 2 , 2018
A survivor of last Saturday’s Pittsburgh synagogue massacre says she doesn’t believe the shooter should receive the death penalty because it’d be “too easy.” “I want him to spend the rest of his miserable life rotting in jail,” Carol Black told CBS News correspondent David Begnaud on Friday. “He has […]