Another evening of Democratic debates was watched on millions of TV screens across America. Part two of the first time the candidates stood at podiums on a stage and debated was aired for all to watch. But no one has mentioned that one of the candidates is not eligible to run for the presidency.

Democratic presidential hopefuls went far left when they agreed that they would support healthcare for illegal immigrants. They also support no deportations of illegal migrants whose only offense is being undocumented and they want to decriminalize crossing the southern border illegally.

NBC anchor Savannah Guthrie asked the candidates, who were lined up on the stage, if their universal health care plans would include “undocumented immigrants.”

The candidates on the stage, who represent about one half of the candidates running for the party 2020 nomination, all raised their hands in unity.

President Trump was apparently watching TV in Japan. He tweeted this:

All Democrats just raised their hands for giving millions of illegal aliens unlimited healthcare. How about taking care of American Citizens first!? That’s the end of that race!

The president was not the only one who had those thoughts. The New York Post put out the paper and on the front page was an image of the candidates raising their hands and a question was asked: “Who wants to lose the election?”

Friday’s NY Post cover on #DemDebate2: “Who wants to lose the election?” pic.twitter.com/JizEFdB0FD

No one was safe from the mud-slinging. Even Obama was criticized by Harris for allowing the deportation of illegal immigrants she described as “non-criminals.”

Harris said, “On this issue I disagreed with my president because the policy was to allow deportation of people who by [Immigration and Customs Enforcement]’s own definition were non-criminals.”

She went on to say that she told sheriffs they did not have to comply with ICE detainers when she served as California attorney general.

The former Obama Vice President, Biden was asked if he would deport “an individual living in the United States without documents” if that was their only offense.

Biden answered only “if they committed a major crime” should they be deported. It is not clear what constitutes a “major crime.”

Biden was asked the question again and he said, “That person should not be the focus of deportation.”

“We should fundamentally change the way we deal with things,” Biden said.

The Center for Immigration Studies, Mark Krikorian, responded to the statements by accusing Democrats of wanting to essentially abolish U.S. federal immigration law.

So, no illegal alien should ever be deported unless they’re convicted of a crime. In other words, immigration law inside the US would be abolished.

There was another question asked by one of the moderators and the answer was given by candidates with a show of hands.

Candidates were asked if they supported making crossing the border illegally a civil, rather than a criminal, offense.

Biden, on the other hand, asked to clarify but then said that the “first thing I would do is unite families. He added that he would “surge billions of dollars worth of help to the region, immediately.”

This group of Democrats have hopes of being the leader of the free world, as POTUS.

What I saw was a group of people trying to beat each other up and threw into the mix that they thought President Trump was a terrible leader and that they could beat him in a run for the presidency.

Also, as many of you know, I research my work. After going through the list of potential presidential candidates, I had to open my eyes wide and see that one of the candidates allegedly, does not legally qualify to be president.

Yes, really. Michael Farrand Bennet is an American businessman, lawyer, and politician serving as the senior United States Senator from Colorado since 2009. A member of the Democratic Party, he was appointed to the seat when Senator Ken Salazar became Secretary of the Interior.

The president is constitutionally required to be natural born, but foreign-born Senators need only nine years of U.S. citizenship to qualify for office.

No Person except a natural born Citizen, or a Citizen of the United States shall be eligible to the Office of President.

The Twelfth Amendment states that “no person constitutionally ineligible to the office of President shall be eligible to that of Vice President of the United States.

I’ve discovered that we have an ineligible Democratic contender. Why has no one else discovered this? Fact checking is important.

Stay tuned. Who knows what I’ll uncover next.

Antitrust hasn't made this big of a splash in presidential campaigns since 1912, House counsel says

Fri Jun 28 , 2019
Sen. Elizabeth Warren (D-MA) speaks on during the first night of the Democratic presidential debate on June 26, 2019 in Miami, Florida. Joe Raedle | Getty Images Antitrust is having a moment unlike anything the U.S. has seen since 1912. That’s according to Lina Khan, the majority counsel to the […] 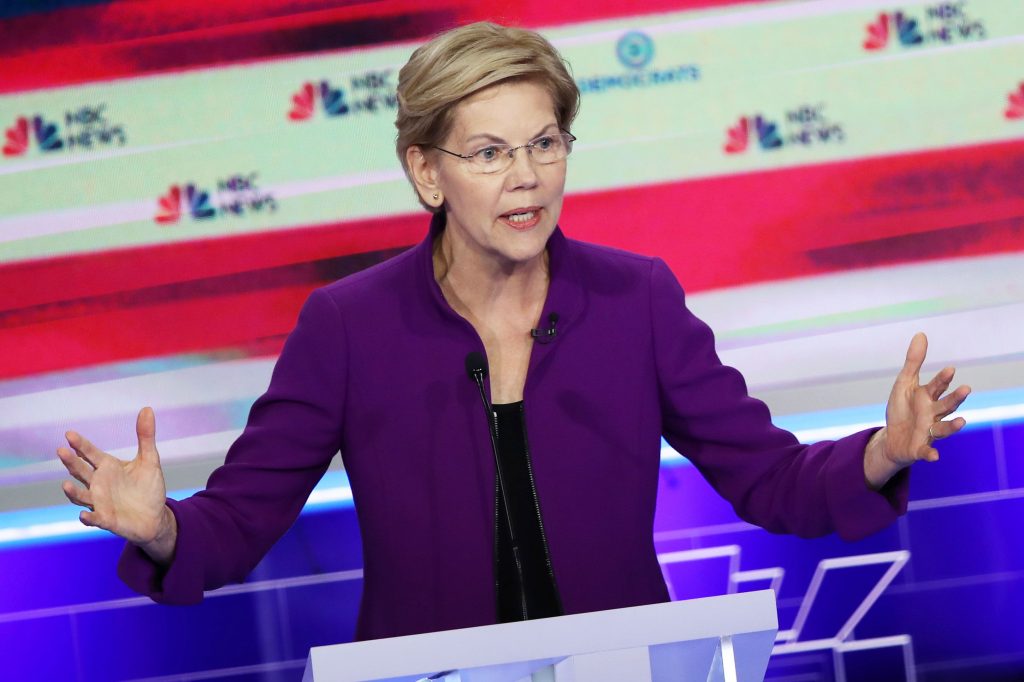