U.S. Federal Reserve Chairman Jerome Powell speaks to reporters after the Federal Reserve cut interest rates in an emergency move designed to shield the world’s largest economy from the impact of the coronavirus, during a news conference in Washington, U.S., March 3, 2020.

The Fed’s two-day meeting is expected to end Thursday with no new proclamations from the central bank, and Chairman Jerome Powell will be sure to distance himself from the election uncertainty.

But he is likely to be asked about one of the most pressing concerns in markets — fiscal stimulus to help the economy recover from the effects of the coronavirus. That topic has been a political hot spot, and it could be resolved in several ways depending on how the election turns out.

“With a GOP Senate majority, the expectations for stimulus is absolutely getting dialed back, which is a good part of why yields are plummeting the way they are,” said Julian Emanuel, equity and derivatives strategist at BTIG. The 10-year Treasury yield went from a high 0.94% Tuesday night to about 0.75% Wednesday.

Strategists say the Fed will not address the election, which was unresolved as of Wednesday afternoon with the outcome in several key states uncertain.

Powell is likely to be asked about the need for fiscal stimulus, which Congress failed to provide ahead of the election. On Wednesday, Senate Majority Leader Mitch McConnell reopened the topic, saying it would be important to pass a package before the end of the year.

“Powell himself has made very clear that the most important thing is getting cash into people’s hands. I think he has to [comment], and I think it may be a market negative, given the fact that kind of rhetoric reinforces the limited effectiveness of the tools in the Fed’s tool box,” said Emanuel.

Fed officials have repeatedly called for stimulus but Powell may not address it, unless he is asked about it by journalists in his 2:30 p.m. ET briefing, strategists said.

House Democrats and the White House had been negotiating a large package with the House seeking $2 trillion, but those talks stalled before the election. McConnell and fellow Senate Republicans have been seeking a much smaller package.

The election was seen by some as a potential solution, since Democrats, if they won the Senate, were expected to approve a large package early next year. But a change in control appears unlikely.

The Fed is also expected to reiterate its “lower for longer” interest rate policy, and that it is willing to use all of its tools to help the economy. Otherwise, Powell is unlikely to introduce any new issues at his post-meeting briefing.

“I think if they move the market, they’ve made a mistake,” said Jim Caron, head of global macro strategies at Morgan Stanley Investment Management. “Their job is to sort of blend into the background at this point.”

The Fed took its most recent big policy step at its last meeting, when it introduced a new approach to target a range for inflation instead of its previous set target of 2%.

Wed Nov 4 , 2020
Democratic presidential nominee Joe Biden is projected to win the state of Michigan, NBC News reported Wednesday. Biden, the former vice president, now is projected to win two states that were won by his opponent, incumbent President Donald Trump, in the 2016 election. The other state is Wisconsin. Michigan has […] 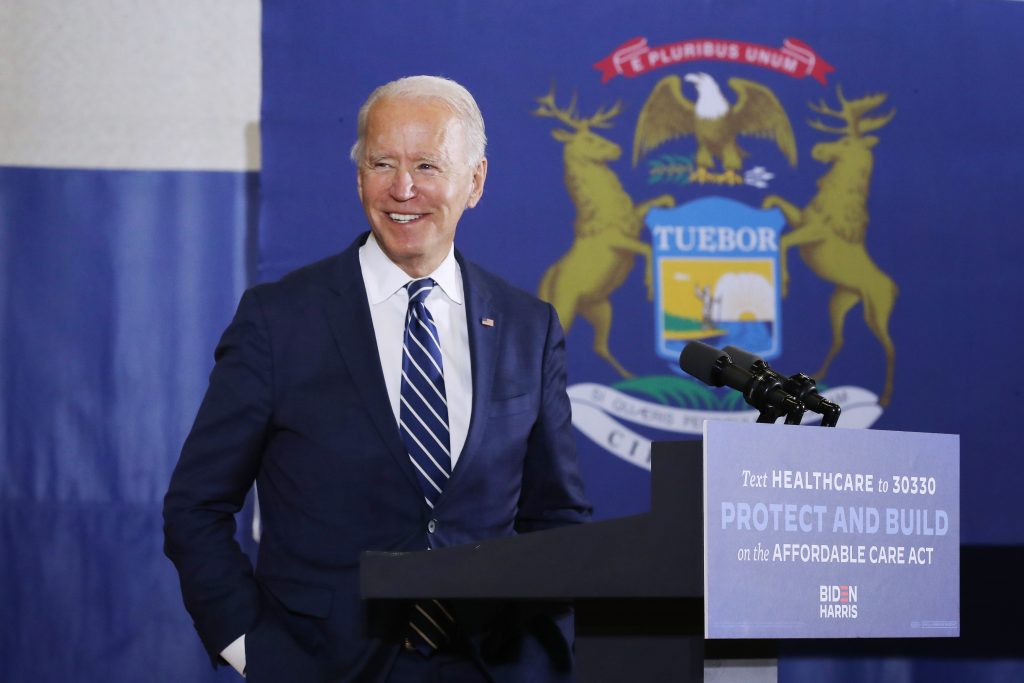