While Joe Biden, Barack Obama and their felonious crew continue to again try and light the Middle East (really Asia) on fire, Liberals push forward their “agenda” of stupidity which has now been with us at least since the Sixties.

Obama freed Taliban leaders, American made helicopters and weapons left behind, and humans falling from planes.

Shouldn’t be too much longer before ISIS returns.

When Biden’s Secretary of Defense was asked a simple question he stared into the lights, like a guilty Bill Cosby, and then looked in a circle for SOMEONE to rescue him.

If you listen carefully you can hear him say Bueller, Bueller, anyone, anyone.

It appears these traitorous morons have learned nothing from their head mouthpiece.

Hey Lloyd Austin your response should have been “Let’s circle back.”

Even Jen I’m on vacation Psaki knows this but of course she “misremembers” or lies for a living.

Speaking of lies, decade upon decade, our society has been told a plethora of things that were never true.

Cigarettes are cool and “good” for you.

Smoke em if you got em.

Margarine is the new butter and will help you stay thin.

If they meant the rotting of your stomach lining until one is unable to eat then yes a thin corpse will ye be.

Diet soda is health food, marijuana is medicinal or just a plant, and Trix are for kids.

According to the experts so are Ritalin and Adderall.

Obesity has skyrocketed, heart attacks and strokes are the norm, seems as though almost everyone is on some type of mood stabilizer, and heart disease and cancer are the biggest causes of death in America.

The flu shot, which has made billions for pharmaceutical companies, who’ve bribed who knows how many politicians, has been replaced as one of the biggest scams in human history.

Imagine the allowance of a foreign substance (flu shot) to be injected into your body based on a THEORY that hopefully thirty percent of the “viruses” available will become negligent to your system.

The other seventy percent?

Well, you’ll just have to deal with it.

This has been the “softening” of the American mind, body and soul.

Too many have been convinced of a bogey man that can only be handled by a pill or an injection and this is known by the powers that be.

The RONA is a complete and utter lie. . .as a virus.

As a human created biological contagion, well, that’s another story.

Did China create this situation?

Are some of the least healthy humans on the planet telling you to take the “vaccine”?

The question is why?

We know wearing masks for a period of time is harmful to our health.

The blocking of oxygen, constant inhalation of carbon dioxide and microfibers from the masks, will cause incredible stress on a human’s body and has done so.

Putting a mask on a child is abuse and the children inherently know this and fight, claw and cry to get them off as the adults in their life tell them to shut up, put it on and drink this juice box filled with high fructose corn-syrup.

To combat this our “leaders” created a “vaccine” and promised as long as everyone took it the masks would come off.

Millions around America have taken the jab to find out that was all a lie.

Put your mask back on and get ready for a booster shot as even the corrupt CDC, who still won’t say these drugs are safe, is now stating that the vaccines may only be good for a few months, so line up all you good little Germans and get ready to be jabbed three to four times a year WHILE STILL WEARING YOUR MASK.

Reports are circulating that the RONA and its “variants” are spreading like wild fire across America.

At first the media blamed the unvaccinated for the breakout.

“You are all selfish” for not lining up and doing what the government says.

They would have called all of us “racist” but reportedly three quarters of the “black” population won’t take the jab either so the race card, at least on this issue, is currently defunct, although I have faith they will work it in eventually.

Kareem is ready to go at a moments notice.

I watched what appeared to be a junkie prostitute on television say, “Dey aint no way I’s taken dat chit.”

If a crack whore says no to any jab, it is time to call a cab.

Yet after all the peer pressure, shaming, threats and even firings we now have learned that the overwhelming majority of people getting “sick from the RONA” have been vaccinated.

Of course they are and each and every one of them can be now described as a super spreader due to the biological contagion (poison) being injected into them and then the process of “shedding” which is very real regardless of what the “experts” continue to spew.

Doctor after doctor who has called out the lies online or on television has been censured, blocked, banned and ridiculed.

What the powers that be cannot do is stop the one on one conversations happening around the country in physicians offices.

I’ve had many stories shared with me but I believe this one is perfect for this column.

An individual in their sixties, in excellent shape, was initially told to get the vaccine by their doctor.

They did and didn’t feel well for about a week.

Months later in the physician’s office for a checkup, the doctor almost ranted and told this person to never get the shot again and NEVER take any of these boosters.

The patient was told, “Fauci is evil”.

That is a direct quote.

Finally I have the chance to say something I’ve waited to for a while.

The doctor is not wrong.

Of course the thousands who have died from the “vaccine” didn’t need to be told.

They received a one way trip courtesy of our Federal Government who continues to circle like a bunch of jackals in search of their next victim(s).

The Liberals are squawking “Say it ain’t so Joe,” while Joe just smiles.

Bitcoin nears $50,000 after months of weakness

Sun Aug 22 , 2021
An illustration showing physical bitcoins alongside binary code displayed on a laptop. Jakub Porzycki | NurPhoto via Getty Images Bitcoin neared $50,000 as it continues to rebound after months of weakness The world’s largest digital currency by market value rose to $49,821 on Saturday afternoon in New York, according to data from […] 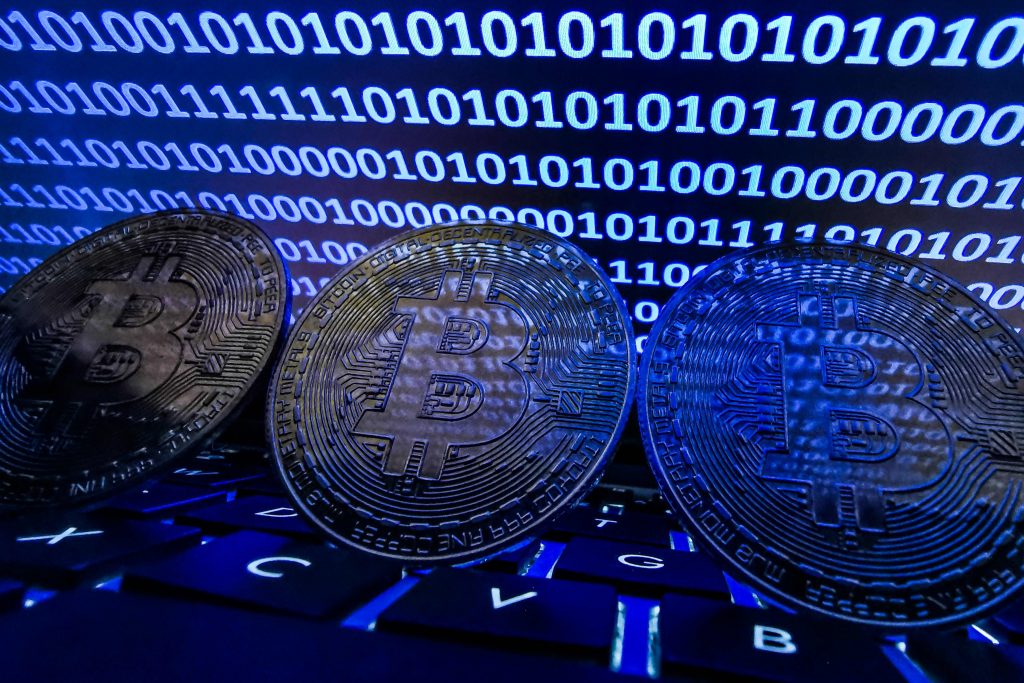