SEATTLE/PARIS (Reuters) – Boeing <BA.N> cut its rolling 20-year forecast for airplane demand on Tuesday, sending its shares lower as the COVID-19 pandemic lays waste to deliveries over the next few years.

The U.S. planemaker, which dominates jet sales together with Europe’s Airbus <AIR.PA>, forecast 43,110 commercial aircraft deliveries over the next 20 years, down 2% from 44,040 projected a year ago and worth an unchanged $6.8 trillion at list prices.

While fleets are still expected to almost double, it is the first time since the 2009 financial crisis that Boeing has cut the 20-year demand forecast in terms of the number of deliveries.

Boeing, also for the first time, lifted the lid on the first half of the 20-year period, showing steep declines for the coming decade on the heels of the COVID-19 crisis. It predicted 18,350 deliveries for 2020-2029, down 10.7% from an unpublished forecast of 20,550 embedded in the last report.

“The industry clearly has been dramatically impacted … by the pandemic,” Commercial Marketing Vice-President Darren Hulst said.

Boeing shares fell as much as 3.3% after the report.

A key forecast for passenger traffic growth – once a reliable 5% a year – has been edging lower since 2015 as a record aviation boom peaked. But it took a sharp knock lower in the latest report, falling to 4% from 4.6% a year ago.

Boeing, America’s largest exporter, lowered its assumption for average global economic growth over 20 years to 2.5% from 2.7% after the pandemic plunged key markets into recession.

Even so, Boeing expressed confidence that demand would return towards previous trends in the 2030s, just as it did after earlier economic shocks. Environmentalist critics say the crisis is an opportunity for the industry to get smaller.

“It will take longer from this crisis but … the industry will prove resilient again; the fundamentals aren’t changing,” Hulst said.

Demand will be buoyed in part by a rise in the number of replacements as airlines accelerate the retirement of older jets to save running costs and meet environmental goals.

Thousands of jets have been parked during the crisis, especially long-haul twin-aisle models, owing to the widespread border restrictions choking international air travel.

Twin-aisle demand will be especially slow in the next 10 years with deliveries of only 3,060 aircraft, Boeing said.

The 20-year forecast for smaller single-aisle jets, such as the grounded 737 MAX, dipped 0.5% from the last survey. Previously Boeing had been revising it up by about 3.5-4% year in, year out.

Boeing now sees 32,270 deliveries in the medium-haul single-aisle category, traditionally the cash cow of large planemakers. That includes 13,570 deliveries between now and 2029.

Although medium-haul travel is showing signs of revival, particularly in the booming China market, airlines there continue to sit on the sidelines amid U.S. trade tensions.

While global passenger demand has been mauled by COVID-19, demand for freighters has gone up as shippers seek alternatives to the cargo space being left empty in unused passenger jets.

Despite that near-term bump, Boeing cut its 20-year forecast for freighters by 10.6% to 930 jets on weaker trade and a move by carriers to group shipments into bigger jets to reduce costs.

How to watch Mars make closest approach to Earth until 2035

Tue Oct 6 , 2020
Two full moons aren’t the only spectacular celestial events of October. This week, Mars is making its closest approach to Earth until 2035 — and to see it, all skywatchers need to do is look up.  Mars will shine bright all month long, but there are two rare days to […] 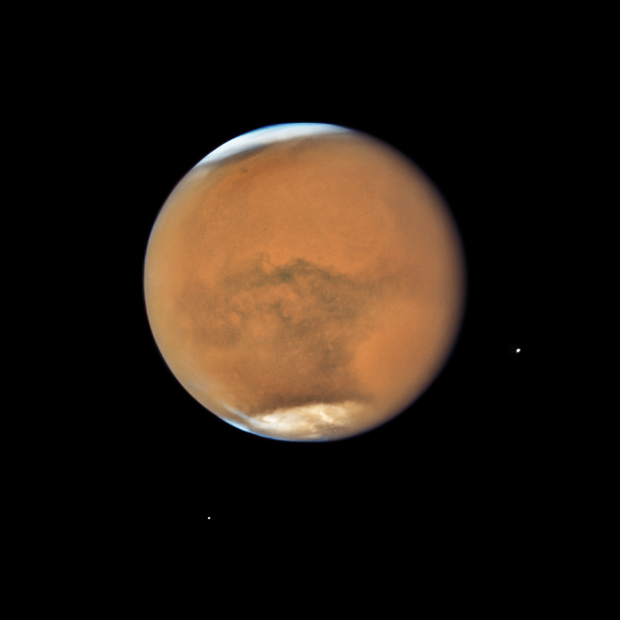