President Donald Trump on Wednesday said that he had pardoned Michael Flynn, his first national security advisor, who pleaded guilty three years ago to lying to FBI agents.

The pardon came before a judge had ruled on a pending motion by the U.S. Department of Department to dismiss the case and undo Flynn’s guilty plea for making false statements to agents about the nature of his conversations with Russia’s ambassador to the United States after Trump’s election in 2016.

“It is my Great Honor to announce that General Michael T. Flynn has been granted a Full Pardon,” Trump said in a Twitter post.

“Congratulations to @GenFlynn and his wonderful family, I know you will now have a truly fantastic Thanksgiving!”

Trump repeatedly has said he was considering granting the retired Army lieutenant general a pardon.

And there has been widespread speculation that Trump would issue other pardons in what is expected to be his final weeks in the White House, after Democratic nominee Joe Biden was projected to win the presidential election.

Trump has refused to concede the election, but is given little chance of overturning Biden’s win through either legal challenges to ballots or state popular vote recounts.

A spokesman for the Biden transition team did not immediately respond to a request for comment from CNBC on the pardon.

Less than two hours before Trump’s announcement, Flynn tweeted a Bible verse from the Book of Jeremiah, which reads, “And they shall fight against thee; but they shall not prevail against thee; for I am with thee, saith the Lord, to deliver thee.”

Flynn’s defense lawyer Sidney Powell recently told Judge Emmet Sullivan, who was handling the case, the case, that she had spoken directly to Trump about the “overall status” of litigation.”

Powell also said she asked Trump “not to issue a pardon” to Flynn as she continued efforts to have his case dismissed as the Justice Department wanted.

In a statement to CNBC on Wednesday, Powell said, “The pardon of Michael Flynn is solely up to the President, but given the corruption we have witnessed in the judiciary and multiple agencies of government executed against General Flynn, this persecution should end.”

“The FBI and [Department of Justice] have been a national embarrassment for more than 15 years,” Powell said.

“It was my fervent hope to make our judicial system work to exonerate an innocent man–as all the Left would want were he anyone but Trump or Michael Flynn, but enough is enough. This is sick. It’s painfully obvious Judge Sullivan is playing an evil political game with a good man’s life and family.”

Rep. Adam Schiff, D-Calif., the chairman of the House Intelligence Committee, blasted Trump in a Twitter post on the pardon.

“Donald Trump has repeatedly abused the pardon power to reward friends and protect those who covered up for him,” Schiff said. “This time he pardons Michael Flynn, who lied to hide his dealings with the Russians.”

“It’s no surprise that Trump would go out as he came in — Crooked to the end.”

Flynn pleaded guilty on Dec. 1, 2017 during a hearing in Sullivan’s court.

As part of his ple, he agreed to cooperate with the probe then being conducted that Robert Mueller, the former FBI director who was appointed special counsel to investigate Russian interference in the 2016 presidential election.

Flynn’s scheduled sentencing hearing in December 2018 was dramatically aborted after Sullivan suggested he had sold out the United States in his actions, and after the judge suggested he would sentence him to jail. Sullivan agreed to postpone the sentencing to give Flynn time to finish his cooperation with Mueller’s investigation.

But months later, Flynn hired Powell as his new lawyer, and began efforts to reverse his guilty plea by claiming misdonduct federal prosecutors.

After opposing Flynn’s efforts for months, the Justice Department earlier this year filed its motion to dismiss the case.

But Sullivan refused to sign off on the dismissal promptly.

Instead appointed an outside lawyer to give him arguments against the Justice Department’s request.

Flynn appealed Sullivan’s moves, and a three-judge panel in the U.S. Court of Appeals for the District of Columbia Circuit agreed with him that the case should be dismissed.

But Sullivan then asked the full line-up of the judges in that appellate court to reconsider that decision. The appellate court did so, sending the case back to the judge for consideration of whether to grant the DOJ’s dismissal request.

Wed Nov 25 , 2020
November 25, 2020 WASHINGTON (Reuters) – U.S. President Donald Trump on Wednesday pardoned his former national security adviser Michael Flynn who had pleaded guilty to lying to the FBI during the investigation into Russian meddling in the 2016 presidential election. “It is my Great Honor to announce that General Michael […] 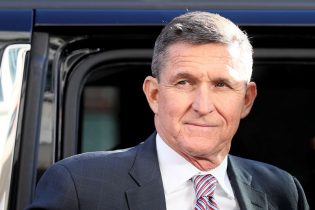