KHARTOUM (Reuters) -Tens of thousands of Sudanese protested in the streets of Khartoum and other cities on Thursday, keeping up the pressure on military leaders after they struck a deal to bring back a civilian prime minister deposed in a coup one month ago.

Prominent political parties and Sudan’s powerful protest movement have opposed Prime Minister Abdalla Hamdok’s decision on Sunday to sign the accord with the military, with some calling it a betrayal or saying it provides political cover for the takeover.

“The revolution is the people’s revolution. The army back to the barracks!” chanted protesters in Al Daim, a working class district of Khartoum. They called for justice for “martyrs” killed in earlier demonstrations.

Protesters also closed a main road in the Sahafa neighbourhood of the capital.

While Hamdok’s reinstatement was a concession by military leader Burhan, key political parties and civilian groups say the army should play no role in politics.

University student Osama Ahmed said he was protesting against Burhan because he wants to bring down the revolution and prevent the creation of a civilian state.

Under the terms of Sunday’s deal, Hamdok will lead a government of technocrats during a political transition expected to last until 2023 and will share power with the military.

It is meant to be based on an earlier deal struck between the military and civilian political forces following the 2019 overthrow of Omar al-Bashir, when they had agreed to share power until elections. The coup scuppered that partnership.

The civilian coalition that had been sharing power with the military before the takeover and its former ministers have rejected the agreement struck by Hamdok, citing a violent crackdown on anti-military protests over the past month.

Hamdok has said the Sudanese authorities are committed to democracy and freedom of expression.

Thu Nov 25 , 2021
Workers set up a scaffold as a Spanish flag flutters at the Colon square in Madrid, Spain, November 2, 2021. REUTERS/Sergio Perez November 25, 2021 By Belén Carreño MADRID (Reuters) – Spain’s left-leaning government is close to a major shake-up of landmark pro-business labour reforms put in place after the […] 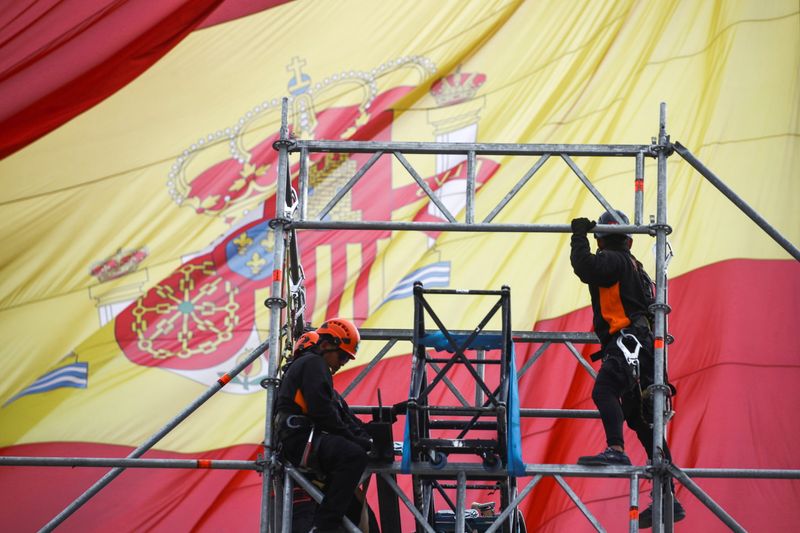