One cannot turn on the television, radio or peruse the internet without mention of “The Big Lie” followed by the slander of Donald Trump.

I don’t know whether President Trump will get a second bite of the apple but if he does I hope by now he has realized “mean tweets” aren’t going to get er done.

With that said let’s discuss just a few of the actual lies the Liberal/Communists have shared with us.

Trump supporters killed a cop during the Capitol “riot”.

This has been a lie from the beginning that too many were willing to accept with zero data or even a reasoned mind.

South Dakota never mandated anything and never had any problems.

Florida and Texas are now both open with no issues.

Furthermore the homeless population across America has grown since the RONA.

The goal was mail in voting and it worked.

This is why Newsom, Whitmer, et al., never worried about not wearing a mask.

They knew it wasn’t anymore dangerous than the flu yet tens of millions bought into the lie so profusely they lined up and let a foreign substance, that increased the free radicals in their bodies, and killed people, be injected.

One can only wonder what the next five to ten years will look like for these individuals. . .if they have that long.

As if that wasn’t enough those who survived the “vaccine” still continue to don the mask, akin to wearing a condom while urinating.

Now we hear the traitor Fauci has lied the entire time and been stripped of any perceived credibility by his own emails.

One would think the masks would be thrown in the trash immediately, but no, the “science” people in California and New York are waiting for a drug addict, and a molester, to give them the all clear.

The only response from Congress was a tweet from Rand Paul saying, “I told you,” with googly eyes.

When do the wedgies and arm farts begin?

Speaking of flatulence the two largest bigoted employers per capita in America continue to strike.

The National Football League has again been caught telling black men they don’t have the comparable intellectual capacity of the white man.

This shouldn’t be a surprise as the Federal Government has been telling blacks of both genders for decades that they don’t measure up.

In laymen/bigoted terminology this is referred to as “diversity”.

“Legally” it falls under Affirmative Action and it appears the past continues to be the present as every American who happened to have black skin that fought against Affirmative Action was called an Uncle Tom and everyone else was referred to as the Klan.

The libs tried to crucify him and have been telling lies about this American for decades.

Whether it is the 1619 fictional victimization or the Tulsa Oklahoma “black” massacre that has been twisted to such a degree that very little of it being repeated now is true, the liberal bigots continue to attempt and feed fecal matter to their “serfs” that they’ve labeled as minorities.

Fortunately Americans who happen to have black skin have started to realize they’ve been lied to for a very long time and that they’ve actually joined today’s version of the Klan.

LBJ handouts and n*gger quotes, Margaret Sanger’s Eugenics and abortion for all blacks and poor people, to Joe Biden literally telling people who they are or aren’t if they don’t vote for him.

The reality of our current situation is the Markets are probably going to roll over pretty hard in the next few months. Interest rates have almost nowhere to go but up and housing will respond by putting millions under water or into foreclosure. Gas has almost doubled and going higher, thanks to more taxes and Biden stupidity, and grocery stores across America continually have empty shelves, something only third world nations ever see.

The Liberalism of Clinton, Bush, Obama and now Biden has pulled decades worth of domestic production from the future and is currently living off borrowed time.

When this cycle of Progressivism/Communism also known as Oppression finally collapses the opportunity for Americans to PUSH FREEDOM FORWARD will be the greatest since World War II.

Be ready, prepared and willing to do some incredibly uncomfortable things during a very difficult time.

For those of you who have children this will be your chance to correct their course.

For those of us who don’t this will be the best and probably last chance to deal with America’s enemies in a fashion that can only be described one way.

Sun Jun 6 , 2021
Condoleezza Rice says early dismissal of coronavirus lab leak theory was a “mistake” – CBS News Watch CBSN Live Former Secretary of State Condoleezza Rice says “there was too much of a tendency early on to dismiss this possibility of a laboratory leak.” View CBS News In Be the first […] 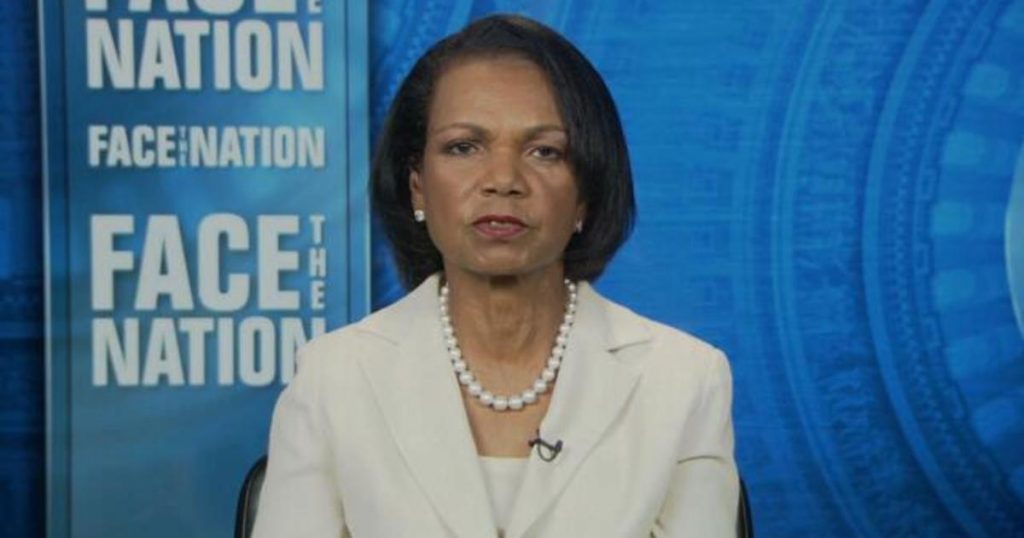