“Do The Right Thing” actress Rosie Perez is set to testify Friday afternoon at Harvey Weinstein’s trial to back up fellow screen star Annabella Sciorra’s allegation that Weinstein raped her in the mid-1990s. Over objections from Weinstein’s lawyers, judge James Burke decided Friday to let Perez take the stand. Sciorra told jurors Thursday that Perez, a friend, was one of a few people she told about the encounter before coming forward publicly in 2017.

Sciorra said the then-powerful movie producer pushed his way into her New York apartment, pinned her on a bed and forced himself on her in 1993 or 1994.

Prosecutors have said Sciorra told Perez weeks or months later that she thought something bad had happened to her and believed she had been raped. According to prosecutors, Perez surmised through subsequent conversations that Weinstein was the alleged attacker, and an upset Sciorra told Perez that was true when she asked.

Weinstein’s lawyers argued that Perez shouldn’t be allowed to testify because her account would be hearsay. Such testimony is sometimes allowed in sexual assault cases if an alleged victim spoke to another person promptly after the incident, but the defense said Sciorra’s conversations with Perez don’t qualify.

Perez rose to fame with her performance in “Do The Right Thing” in 1989 and is also known for such movies as “White Men Can’t Jump.” She was nominated for a supporting actress Oscar for 1993’s “Fearless.”

Weinstein, a onetime studio boss whose downfall was a turning point in the #MeToo movement, is not actually charged with assaulting Sciorra — she is one of four other accusers who prosecutors plan to call as witnesses in an attempt to prove Weinstein had a pattern of assaulting women.

He is charged with forcibly performing oral sex on former production assistant Mimi Haleyi in his New York apartment in 2006 and raping an aspiring actress in a New York hotel room in 2013.

The 67-year-old producer of such Oscar-winning movies as “Chicago” and “The King’s Speech” has insisted any sexual encounters were consensual. He could get life in prison if convicted.

Earlier Friday, prosecutors called a forensic psychiatrist to the stand in an attempt to give jurors an answer to a question raised by the defense — if Weinstein is such a monster, why did some of his accusers stay in friendly contact with him for years after the alleged assaults?

Dr. Barbara Ziv told the jury of seven men and five women that most sex-assault victims continue to have contact with their attackers, who often threaten retaliation if the victims tell anyone what happened. Ziv testified about the same topic at the Pennsylvania trial that led to Bill Cosby’s 2018 conviction on charges of sexual assault.

Victims can end up blaming themselves “without knowing that their behavior is entirely expected,” said Ziv, who has described herself as an expert on “sexual assault victim behavior” who has evaluated more than 1,000 such people.

Ziv also testified about other “rape myths,” or preconceived notions about rape and victims of sexual assault, that she said are “usually wrong.” The “rape myths” included that rape is most commonly perpetrated by a stranger, that victims always physically resist their assailants, and that victims always report the incident promptly.

Ziv said that physical resistance such as screaming, yelling or biting is rare. She said victims often don’t report the crime because they blame themselves and feel shame and humiliation. She said most rape victims know their assailants, and can maintain contact with them after the assault over fear the situation will “get worse.”

“‘I don’t want this individual who sexually assaulted me to ruin my reputation, to put my job in jeopardy,'” Ziv said, explaining how a victim might respond.

Victims are “hoping that this is just an aberration,” she said, and they tell themselves, “‘I can put it in a box and forget about it. I don’t want it to get worse. … I can handle this physical trauma, but God forbid this ruins the rest of my life.'”

Ziv did not, however, personally evaluate any of Weinstein’s accusers, a point his lawyers seized on.

The defense also offered a different explanation for the women’s continued contact with him after the alleged attacks. In his opening statement this week, Weinstein lawyer Damon Cheronis zeroed in on a message from one woman telling Weinstein that she loved him and wanted him to meet her mother.

“Ladies and gentlemen, that’s not how you talk to your predator,” Cheronis said.

Weinstein’s lawyers also questioned Sciorra’s actions during and after the alleged assault. Defense attorney Donna Rotunno on Thursday questioned why Sciorra made the 1997 Weinstein-produced film “Cop Land” if he had raped her a few years earlier.

Sciorra, now 59, said she wasn’t aware of Weinstein’s involvement in the film until after she had agreed to appear in it.

Rotunno earlier asked whether Sciorra fought back when Weinstein first put his hands on her, as Sciorra said she was in a hallway and backing into a bathroom. Sciorra replied she didn’t, but that she “was yelling at him to get off of me.” Sciorra said she punched and kicked Weinstein as he pinned her to a bed. Weinstein then pinned her hands over her head and raped her, she testified.

In a rapid-fire series of questions, Rotunno asked whether Sciorra went to the police, called 911, went to a doctor or hospital or called a friend after she was allegedly attacked by Weinstein.

Sciorra replied she did not. She had earlier told the court that she believed rape was something that happened “in a back alleyway in a dark place by somebody you didn’t know.”

“At the time, I didn’t understand that that was rape,” Sciorra told Rotunno.

Sciorra also testified that when she ran into Weinstein about a month after the alleged attack and confronted him about what had happened, he parried, “That’s what all the nice Catholic girls say,” she testified.

Then, she said, he leaned toward her and said menacingly: “This remains between you and I.”

“I thought he was going to hit me right there,” Sciorra said.

-Reporting by Cassandra Gauthier, Shawn Matthews and The Associated Press

Fri Jan 24 , 2020
Workers assemble washing machines at the Whirlpool Corp. manufacturing facility in Clyde, Ohio, U.S. Luke Sharrett | Bloomberg | Getty Images Here are the most important things to know about Monday before you hit the door. 1. Whirlpool to report earnings Whirlpool is on deck to release its fourth-quarter earnings […] 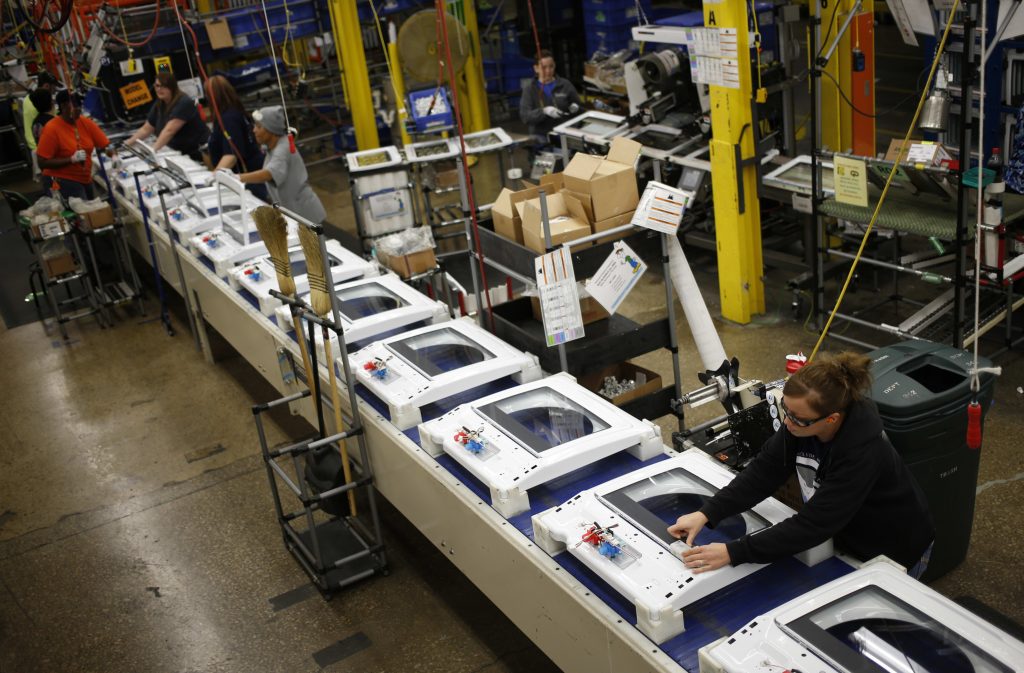