JaMychal Green had 17 off the bench, Jamal Murray scored 15, Facundo Campazzo added 11 and Gary Harris and Paul Millsap had 10 apiece to help the Nuggets beat Minnesota for the 10th straight time.

D’Angelo Russell had 33 points and 11 assists, Juancho Hernangomez had 21 of his 25 points in the first half and Malik Beasley and Anthony Edwards scored 15 each for the Timberwolves.

Jarred Vanderbilt added 11 off the bench for Minnesota, which has lost five straight.

Denver trailed 100-93 early in the fourth quarter but used a big run to take control. Jokic hit two baskets, Monte Morris tied it with a 3-pointer and Jokic gave the Nuggets the lead with a short jumper.

Campazzo’s three-point play and a free throw and a dunk by Barton finished 15 straight points to give Denver a 108-100 lead.

Vanderbilt scored the next six points for the Timberwolves but Barton’s dunk with 3:53 put the Nuggets ahead 113-106.

Minnesota had a chance to get within two after Russell hit a jumper but he and Beasley missed long 3-pointers and Denver scored eight straight points to go ahead by 11 with 1:23 left.

The Timberwolves led by three at the half and quickly stretched it to 78-70 early in the third quarter. Denver climbed its way back in and tied it at 87 on PJ Dozier’s fast-break layup, and after Russell’s layup Green hit a 3-pointer gave the Nuggets the lead again.

Minnesota scored seven straight and led 96-93 heading into the fourth.

Denver led 49-31 when Campazzo hit a layup with 7:30 left in the second quarter but the Timberwolves rallied to get the deficit down to , and then two technicals by Jokic — one for hanging on the rim after a dunk — sparked a 14-2 run.

Russell capped a 43-point second quarter with two free throws to give Minnesota a 65-62 halftime lead.

Lakers get by Grizzlies for 4th straight win 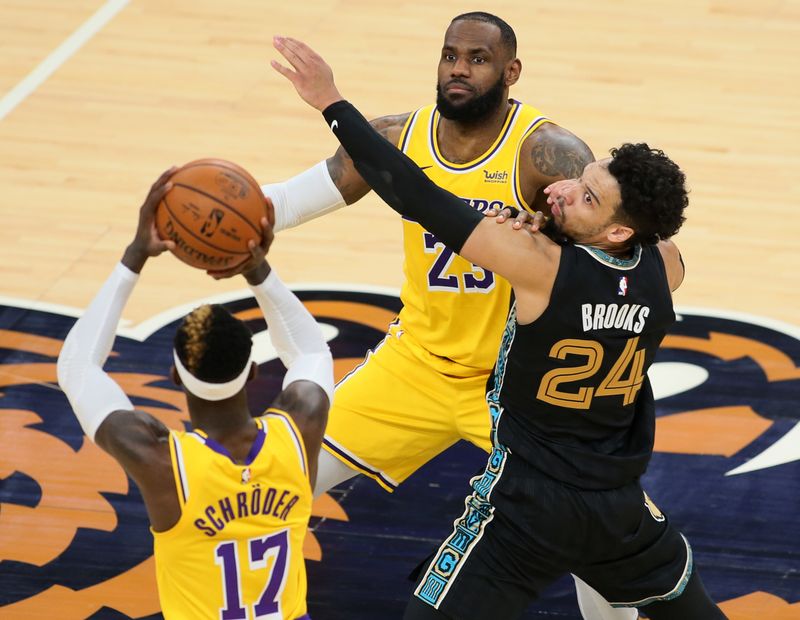