Eight people have been sentenced to go to jail for the murder of Jamal Khashoggi in 2018 by a Saudi court.

State television has said that Riyadh Criminal Court issued final verdicts to eight people, who we can assume are male, but no names were given.

A maximum sentence of twenty years was given to five people, one person received a sentence of ten years and two people got seven years each.

No senior officials or anyone  who may have ordered the killing were found to be guilty.

Rights groups have criticized the trial and the independence of the court.

Saudi Crown Prince Mohammed bin Salman has denied any knowledge of the operation that resulted in Khashoggi’s death.

Khashoggi had been writing columns for the Washington Post and his articles were critical of the crown prince.

Having been living in the United States for about one year, in exile, Khashoggi traveled to the Saudi consulate in Turkey in late 2018 after the prince had overseen a crackdown in Saudi Arabia on human rights activists, writers and critics of the kingdom’s disturbing conflict in Yemen.

Khashoggi had an appointment inside the consulate was met to pick up documents that would allow him to marry his Turkish fiancé. She waited outside.

Fifteen Saudi agents had flown to Turkey to meet with Khashoggi. The team  of fifteen included a forensic doctor, intelligence and security officers, and individuals who worked directly for the crown prince’s office. This information was according to Agnes Callamard, who investigated the killing for the United Nations.

It is alleged by Turkish officials that Khashoggi was killed and then dismembered with a bone saw inside the consulate.

His body has never been recovered but Salah Khashoggi, one of his sons, lives in Saudi Arabia and has received financial compensation from the royal court for his father’s killing.

In the mean time, Turkey had apparently had the Saudi Consulate wired for sound and shared an audio of the killing with the C.I.A and others.

Opinions of Western intelligence agencies and the U.S. Congress have said the crown prince bears ultimate responsibility for the killing.

These same people say that an operation of this magnitude could not have happened without his personal knowledge.

The crown prince has denied any knowledge of the operation.

If  Khashoggi had feared for his life, it’s not likely that he would have traveled to the consulate in Turkey.

He must have been blindsided by the attack on him.

Wed Sep 9 , 2020
by Daveda Gruber On Tuesday two women from Delaware, who were accused of stealing a MAGA hat outside the Democrat National Convention, were indicted on some rather serious charges. Wilmington Police said they identified Olivia Winslow and Camryn Amy after reviewing the footage on video. Winslow and Amy, who are both […] 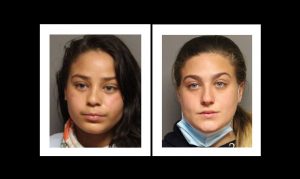