Host Elon Musk during the monologue on Saturday, May 8, 2021.

The price of dogecoin spiked Thursday morning after Tesla CEO Elon Musk mentioned the coin on Twitter, adding another chapter to the volatile history of a cryptocurrency that started as a joke.

The price of the digital coin was 16% to 42 cents, hours after the Musk tweet.

“How much is that Doge in the window?,” Musk tweeted.

Thursday’s move comes after a wild day for cryptocurrencies saw bitcoin, ether and dogecoin all plunge sharply before clawing back a chunk of those losses later Wednesday.

Musk, who talks and posts about dogecoin frequently, said earlier this month that he was working with developers to improve the cryptocurrency. He has also referred to it as a “hustle” on “Saturday Night Live” and said its value was largely speculative at this point.

Thu May 20 , 2021
OAN NewsroomUPDATED 6:56 AM PT – Wednesday, May 19, 2021 Tech stocks are struggling to maintain pandemic-era rallies as investors rotate out of the sector. On Wall to Wall Greta spoke with Eddie Ghabour, co-owner of Key Advisors Group, about the Fed’s latest policy and how it will impact Wall […] 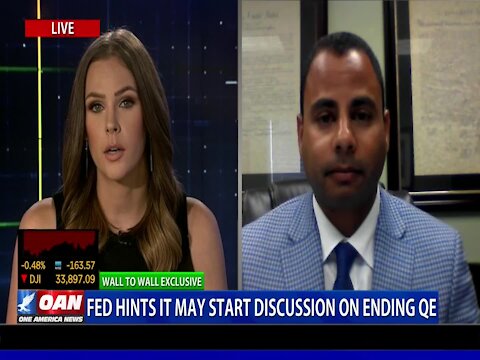