One night, in the late Eighties in Chico California, a teammate of mine and I drove over to another teammate’s apartment to play some cards.

Let’s call our other teammate Clinton.

After thirty minutes both of us caught Clinton cheating.

He vociferously denied that it had happened and swore on his mother’s grave that he was telling the truth.

We knew he was lying and with a simple glance at my buddy I changed my tune and told Clinton that I believed him and let’s just get back to playing.

We then turned the tables and took every dollar the liar and his cohort had that night.

Over a decade later I received a telephone call from my college buddy.

As we caught up on life he said, “Hey did you hear about Clinton?”

“No. I’ve never seen him again after that season. What’s that idiot up to?”

I can’t say I was shocked but mid-thirties is pretty early to kick the bucket.

My buddy continued, “Yeah, apparently he was arrested for raping some women and they found him hanging in his cell.”

I paused for a second at the picture my buddy was describing and then immediately flashed to Clinton cheating his teammates at cards.

Humans left unchecked will almost always graduate to worse crimes and easier targets and there is no greater example than today’s Liberal Democrats.

Khat has replaced Meth in Minnesota and Portland is beginning to look like Rashida Tlaib’s ancestral “Palestinian Authority.”

Supposedly Suburban Soccer Moms are struggling with President Trump’s Twitter Feed but have no problem with Joe Biden sniffing and groping their female children while Biden’s own child smokes crack, commits one felony after another, impregnates a stripper and sleeps with his dead brother’s wife.

These are called Facts but Facts haven’t mattered in a while.

The Truth has been made to be Inconvenient.

The Hippocratic Oath has long been replaced by profitable baby parts.

Today’s religion has nothing to do with God.

Science is no longer based in any actual hypotheses or statistical probability.

Math has been perverted to such an extreme that constants no longer exist.

When two plus three equals either fish or wallpaper, Houston we have a problem.

We are now being told that teaching “Black” humans English is racist.

The Black humans are being told they don’t have the capacity to conjugate verbs or think beyond a monolithic process, unlike the Brown folks.

The NBA, NFL,  Yahoo, Google, Twitter et al. all appear to agree with the Democrat plantation prose of Black Lives Matter but only if they vote for Joe.

No fracking, no guns, late-term abortion on demand, Chinese owned American companies and politicians, wide open borders and put on your masks!

Sadly nothing I have written is hyperbolic.

In fact I’ve barely scratched the surface of the criminal cabals known as the Clintons, the Bushes, the Obamas and the majority of politicians in Washington D. C. .

Crushing debt, the disappearance of the Justice Department, packed courts, and the constant gyration of Chinese Tik Tok.

One way or another we are going to have to make a move soon.

The card cheaters have graduated well beyond rape and that in itself is a road too far.

It’s time to introduce them to the rope.

Whether President Trump wins or not.

Guinea votes in election, with president seeking a third term 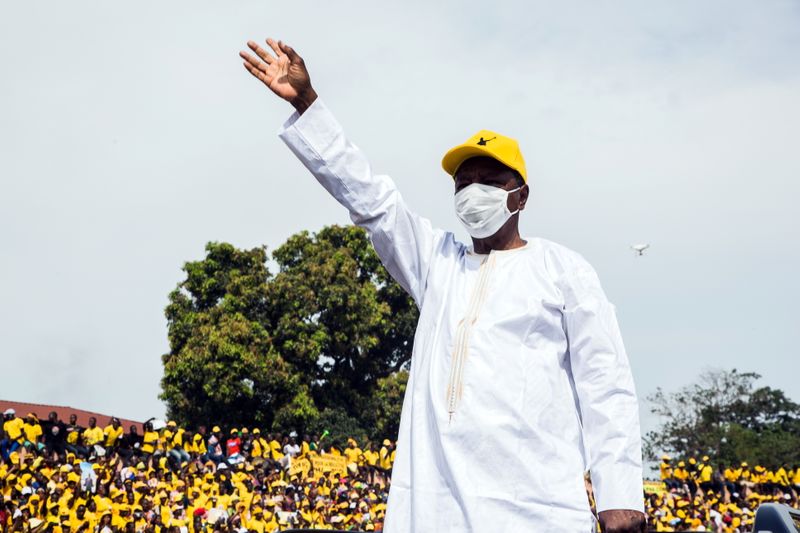