Cyntoia Brown-Long, who was granted clemency earlier this year after serving 15 years of a life sentence for killing a man, sat down with CBS News for a sweeping interview on redemption, finding love in prison and her message to abuse victims.

Brown-Long, now 31, was released from prison in August after Tennesse Governor Bill Haslam commuted her sentence for murdering 43-year-old Johnny Allen, who allegedly hired her for sex when she was 16. Her lawyers argued that she fatally shot Allen in self-defense.

Brown-Long was tried as an adult and convicted of first-degree murder and aggravated robbery in 2006 without the possibility for parole until 2055. In Tennessee, a  juvenile sentenced to life in prison must spend at least 51 years behind bars before they are eligible for review — the highest minimum requirement in the U.S.

Brown-Long said she regrets running away from what she has described as a supportive home, and has carried the pain she caused her mother “for all these years.”

“One of my biggest regrets is the way that I hurt my mother,” she said.  “You know she tried so hard. She tried everything that she knew to try.”

Brown-Long, however, said there were other factors that played into her decisionmaking when she was young.

“We have to be more conscious of all of the influences on children,” she said. “There’s school, there’s neighborhood, there’s what you’re seeing in the media. So she tried, but it was hard for her to fight the battles that were going on within me, that I had taken on from other places around me.”

“When you’re doing time, your family is doing time with you. Your family has to rearrange their lives because of your absence,” she added. “They have to be present for you. You want to shield them from as much as you can.”

Brown-Long said she was an adult when she realized she had fallen victim to a system of abuse. At the time, she was involved with a Tennessee group called End Slavery that works with human trafficking victims.

“It took many, many years,” she said. “I was in my late twenties when I actually realized that I was a trafficking victim. For so long, you know I had thought, ‘no, they said that I was a teenage prostitute.’ I knew what I was doing.”

She said she dealt with guilt and blame for years.

“You know, of course, I let him manipulate me into doing this,” she added. “I thought I was doing something for someone I figure was my boyfriend and that wasn’t necessarily the truth.”

Brown-Long recounted how once she’s realized the situation she had been put in, she started searching for answers, including “why I was just so vulnerable.”

“You know there’s a certain element where you’re just vulnerable because you’re a child your mind is just naturally impressionable in that way,” she said. “But it was like, why was it just so easy for this man to come along and in the space of a few weeks I was doing these things?”

She now hopes other young girls can learn from her story.

“In some way, everybody is just one bad decision, one mistake, one accident from being caught up in the justice system,” she added. “We all should be invested in making sure that it’s treating people the way they should be treated, the way that you would want to be treated.”

Why she wants to speak to her victim’s family

After Brown-Long was granted her high-profile clemency, the family of her victim released a statement in the wake of the announcement.  It read in part: “our hearts are broken because we feel Johnny never got to defend himself. We never got to be a voice to him.”

“I completely understand how they feel,” Brown-Long said. “This was somebody’s son, it was someone’s brother. If you lose someone, grief doesn’t care about what the situation was.”

Brown-Long said she understands their pain because “grief doesn’t care about what the situation was.”

“Especially in the justice system it’s such an adversarial process,” she added. “Many times, both the defendant and the victim’s voices are left out of it. So I think there are many things that are left unsaid. Many things that people would like to say.”

Brown- Long said she would “absolutely” sit down with Allen’s family.  “If they would ever want to have a conversation then I’m open to that,” she added. “But so far I haven’t received any kind of word that they would be open to that.”

“I don’t think anybody is beyond repair.”

Although her sentence was commuted, Brown-Long remains a convicted murderer. She said she doesn’t believe the act has come to define her.

“Yes, I’ve made mistakes. I’ve done something that completely destroyed a family,” she said. “It damaged multiple people in the process. We’ve all done things that we can regret. Obviously some worse than others. But the point is there is redemption.”

Brown-Long said she saw a change in herself after spending 15 years behind bars. She said she hopes others can recognize their own power of transformation, too. “I don’t think anybody is beyond repair,” she added. “I think that as people we’re so much more complex than just being limited to our mistakes and the bad decisions that we make.”

On how she found love while in prison

Brown-Long is married to recording artist J. Long, previously known for his work with the R&B group Pretty Ricky. They tied the knot in August after she was released.

Brown-Long said she received letters from all over the world while she was incarcerated, but that Long’s notes stood out.

“Well aside from the fact that he is very fine,” she said with a laugh. “[His letter] really spoke out to me in a way that I can’t describe.”

She called his letters “unique” and recounted how she recently found the first one he sent to her. The note included #FreeCyntoia2017 on the bottom of the page, months before the hashtag became a trend on Twitter.

She said it’s “incredible” they can now start their life together. “I really feel like I live with my best friend,” she added.

Outrage at packed Fort Worth council meeting over police shooting 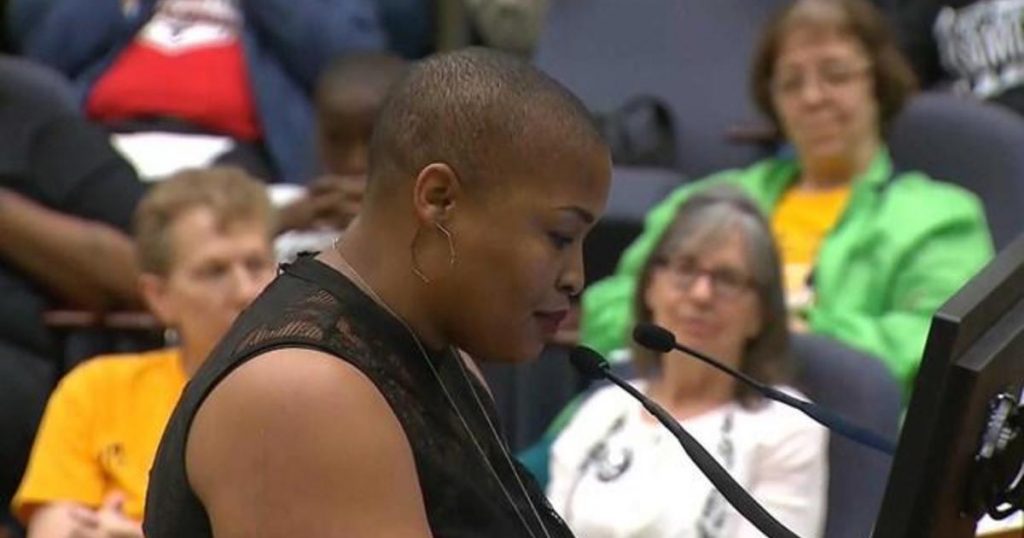