Apathy is sadly rampant in America.

If not for technology, incredible distribution systems, and the giving of money and food through the generosity of the United States taxpayer, millions of Americans and illegals would no doubt starve to death.

In our last election almost half of the country couldn’t be bothered to vote.

Of those who did (roughly) fifty percent voted for a lying criminal/leader of an organized crime syndicate, soon to be indicted.

Return in a year and remember you heard it here first.

Three quarters of the population, too incompetent, indoctrinated, or incapacitated, to realize Oppression was about to consume the greatest beacon of Freedom ever known.

Fortunately the creators of our electoral system understood human behavior and layered in as many checks and balances as they could as long as the Rule of Law was still in place.

Closer than most realize.

With seventy-five percent of the population ignoring reality, and tens of millions of illegals requiring reality fit their needs, it is imperative that the American Citizen grasp the concept of the TRUTH.

Let us use a statement made by the President-Elect to explain how many citizens are still willing to be lied to or “wagged by the dog”.

Donald Trump tweeted, “Nobody should be allowed to burn the American flag – if they do, there must be consequences – perhaps loss of citizenship or year in jail!”

Pseudo intellectuals, feigners of justice, and the bottom of the barrel (most lawyers) decried this statement as wrong, saying things like burning a flag is protected by the 1st Amendment or my favorite, Antonio Scalia said so.

The job of the Judiciary (all levels) is to enforce not interpret law and due to the bastardization of our Executive, Legislative, and Judicial Branches it is virtually impossible for “legal scholars” to even exist as the concept of the Rule of Law isn’t consistently enforced.

Tens of millions amnestied by Reagan and Clinton, and allowed to congregate again through Bush and Obama, provide a stark and very visible reality of rampant selective enforcement of law.

Laws only matter when enforced for all.

Scalia was wrong as were the other four simpletons who “interpreted” rather than enforced.

The 1st Amendment protects certain things.  Speech is one of these things.

The Constitutional Right of Free Speech is specific.  It affords absolute protection to the American Citizen from persecution or prosecution by all forms of government when a Citizen chooses to speak, write, sing, or even pantomime truth to power.

Of course while Oppression (the Obama Administration) controls the Justice Department, the Free Speech of many Americans continues to be removed or has been removed at the hands of Lois Lerner, John Koskinen, Eric Holder, and Loretta Lynch but to name a few.

The exercising of the 1st Amendment does not allow or legally justify the ignoring or breaking of any other law.

Marching in the streets without a permit breaks or violates multiple laws, codes, etc., in every county, city, or town across America.

Burning the Flag of the United States, or any item for that matter, in public, violates many penal codes including potential arson, endangerment charges, and if all else fails, littering.

As citizens we have the legal right, and I would argue duty, to stop crime when and where we can.

The Federal Government has been ignoring or engaging in crime for decades.

Many in America are angry and because of this the pendulum has swung from the “Left” to the “Middle”.

We believe in earning our way, Free Will, Freedom, and the Pursuit of Happiness.

We are done with the tune in, turn on, drop out politicians of the Me Generation.

No more lies, no more drugs, and no more flying flags of other nations in our streets.

The Red White and Blue stands for Freedom and covers our fallen.

Crime should have punishment and in a just system it does.

This much is a fact.

If we won’t let you “tread on it” then burning isn’t even an option.

As sanity is restored to America I feel quite confident specific legislation will occur making any and all forms of desecration of the Stars and Stripes illegal.

Until that time, those of you who feel the need to continue to exercise your Free Will this way, take heed.

The exercising of Free Will works both ways and there are tens of millions of us MORE THAN WILLING to extinguish all enemy flames.

Scamper back to your basements and pray Lady Liberty always waves.

The day She doesn’t guarantees the removal of a lot of things including a “safe space” for you.

Don't fall for these holiday gift exchange scams on Facebook

Wed Dec 7 , 2016
Last Updated Dec 4, 2017 6:08 PM EST ‘Tis the season… to get scammed on Facebook. Two scams called the “Secret Sister Gift Exchange” and the “Secret Wine Bottle Exchange” are once again spreading across Facebook like wildfire, and unfortunately, users are (still) falling for it. It sounds like a […] 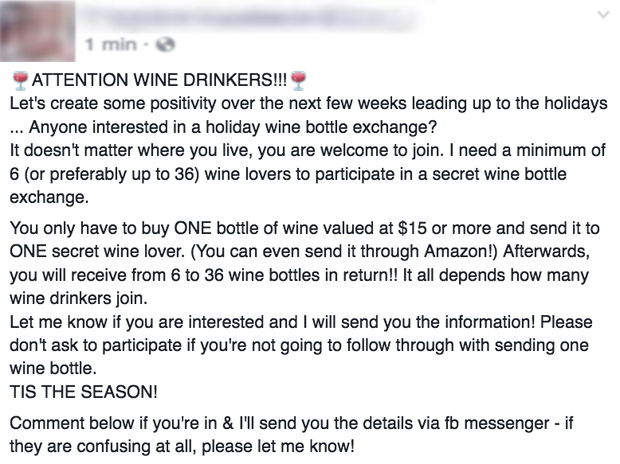