The body of a patient who died is seen as healthcare workers treat people infected with the coronavirus disease (COVID-19) at United Memorial Medical Center in Houston, Texas, U.S., December 30, 2020.

At 5 a.m. on July 11, Tara Krebbs received a call at her Phoenix home. Her mother was on the other end, hysterically crying. Tara’s dad had woken up unable to breathe, and he was on his way to the hospital.

Charles Krebbs, 75, started showing symptoms of Covid-19 shortly after Father’s Day in June, first running a fever and then losing his sense of taste and smell. With local hospitals overwhelmed, he had been trying to recover at home, still awaiting results of a Covid-19 test that had taken weeks to schedule. His results still weren’t back — even as EMTs rushed him to the emergency room.

Just weeks earlier, Tara had dropped off a Father’s Day present at her parents’ home with a card that read “next year will be better.” It was the last time she would see her dad until the night he died, when she was given an hour to say goodbye in person in the ICU. After nearly four weeks in the hospital, he lost his battle with the coronavirus in early August.

Charles Krebbs is one of more than 500,000 Americans who have died from Covid-19, a staggering toll that comes about a year after the virus was first detected in the U.S., according to data compiled by Johns Hopkins University. And for each of those lives lost, there are children, spouses, siblings and friends who have been left behind.

“I look at old pictures of him holding me and you can see how much he loved me,” Tara said of her father, who worked as a real estate broker and an appraiser in Maricopa County. He was a music lover and history buff who enjoyed living near his daughter and her family, taking his grandson to his first day of kindergarten and coaching his Little League teams.

“He was just a caring, hands-on guy who loved his family more than anything,” said Krebbs.

Today’s grim milestone comes on the heels of some of the deadliest months of the pandemic. Following a fall and winter surge in Covid-19 cases, there were 81,000 reported deaths in December and 95,000 in January, both far surpassing April’s peak of just over 60,000. At the same time, U.S. health officials are racing to increase the pace of Covid-19 vaccinations across the country.

Although the virus has been with us for more than a year, the scale of the death toll is hard to fathom.

“As of this week during the dark winter of the COVID-19 pandemic, more than 500,000 Americans have now died from the virus,” President Joe Biden said Monday in a statement. “On this solemn occasion, we reflect on their loss and on their loved ones left behind. We, as a nation, must remember them so we can begin to heal, to unite, and find purpose as one nation to defeat this pandemic.”

Biden added that he is ordering the American flag to be flown at half-staff on federal grounds until Friday to recognize the over 500,000 Americans who have died of Covid-19.

Nearly as many Americans have now died from Covid-19 as were killed in World War I and II, combined. The U.S. death toll represents a population roughly the size of Atlanta or Kansas City, Missouri.

“Even when you hear about half a million people dying, it sounds like a very large number, but it’s hard to put it into perspective,” said Cynthia Cox, a vice president at the Kaiser Family Foundation, a nonprofit focused on national health issues. “It’s hard for people to hear these big numbers and put faces to them.”

One reason for that is the nature of how these deaths have often occurred, in isolation and away from loved ones.

“The thing that has been different about Covid from other mass casualty events is the lack of video or personal connection at the time of death,” said Cox. “Covid wards are so sealed off for safety reasons that we don’t have news cameras in there to show us what this really looks like. We hear a lot of big numbers but we don’t get that personal connection unless we know someone.”

David Kessler, a Los Angeles-based grief expert and author who has been running an online support group for those who have lost someone to Covid, said that 500,000 deaths is a number “that the mind doesn’t want to comprehend.”

“A number like that makes the world dangerous, and we’d rather not live in a dangerous world,” he said.

Searching for a reference point, Kessler compared the Covid death toll to the two Boeing 737 Max airplane crashes in 2018 and 2019 that killed a total of 346 people.

“Think about how many 737 Maxes went down, how much news we had and the visuals we had,” he said. “You don’t realize that 500,000 people is the equivalent of almost 3,000 airplanes going down. Eight would have gone down yesterday. Can you imagine if eight planes crashed every day?”

A leading cause of death in the U.S.

The Covid-19 death toll puts the disease firmly among the leading causes of death in the United States. According to data from the Centers for Disease Control and Prevention, only heart disease and cancer killed more than 500,000 people in a year in 2019, the most recent annual figures available. When the daily death toll peaked in January, Cox found in a Kaiser Family Foundation analysis that Covid was killing more people per day than any other cause.

How the Covid-19 death toll

compares with other U.S.

over the past year

How the Covid-19 death toll compares with other U.S.

The effect of the disease is so sweeping that in the first half of 2020, it sunk life expectancy in the U.S. by one year — a staggering drop, according to the latest analysis by the CDC.

The United States has been one of the hardest-hit countries by the coronavirus, with more reported deaths than anywhere else in the world. When adjusting for population, the U.S. trails only the U.K., the Czech Republic, Italy and Portugal in deaths per capita, according to a Johns Hopkins University analysis.

‘She meant a lot to a lot of people’

Isabelle Odette Papadimitriou was a respiratory therapist in Dallas, who spent the spring and summer caring for Covid patients at the hospital where she worked. In late June, she caught the virus herself and died shortly after on July 4, her favorite holiday. She was 64.

Her daughter, Fiana Tulip, remembers her mother as someone who was “strong as an ox” and had made it through countless flu outbreaks in her 30-year career. A fan of the British royal family who treated her two dogs “like little humans,” Tulip said she was the type of mother who would send her daughter Amazon packages as soon as she thought she needed something. After she died, Tulip received a pair of pink frilly shoes that Papadimitriou had sent for Tulip’s daughter, her first grandchild.

Over the course of the summer, Tulip got calls from her mother’s former colleagues and friends, ranging from an employee at Papadimitriou’s local doggy day care to the owner of a storage unit that she rented from in Texas.

“People who loved my mom were just coming out,” Tulip said. “She meant a lot to a lot of people.”

The pandemic isn’t over yet

Coronavirus cases in the U.S. have plummeted in recent weeks, and the pace of reported deaths is also slowing. The country is seeing just below 1,900 Covid-19 deaths a day, based on a weekly average, down from more than 3,300 a day in mid-January, according to Johns Hopkins University data.

Nevertheless, the death toll will continue to increase. Projections from the Institute of Health Metrics and Evaluation at the University of Washington show a range of 571,000 to 616,000 total Covid-19 deaths in the U.S. by June 1, based on various scenarios.

Fauci, the nation’s leading infectious disease expert, warned Americans on Sunday to avoid a sense of Covid-19 complacency despite the falling case numbers, saying that “the baseline of daily infections is still very, very high.”

The CDC has also identified at least three mutant virus strains in the U.S., some of which have been shown to be more transmissible than the dominant strain, though experts have largely said they expect the current vaccines to provide some protection against these variants.

So far roughly 44 million people, about 13% of the population, have received at least one shot of either Pfizer’s or Moderna’s two-shot vaccines, and Biden suggested during a CNN town hall last week that the country could return to some semblance of normalcy by Christmas.

But for those who have lost a loved one to Covid-19, Kessler, the grief expert, said things won’t be the same.

“If you’re talking about family members, we don’t recover from loss,” he said. “We have to learn to live with the loss.”

Mon Feb 22 , 2021
Boxes containing the Pfizer-BioNTech COVID-19 vaccine are prepared to be shipped at the Pfizer Global Supply Kalamazoo manufacturing plant on December 13, 2020 in Portage, Michigan. Morry Gash | Getty Images All of the shipments of Covid-19 vaccine doses that were delayed last week by the historic winter storm are […] 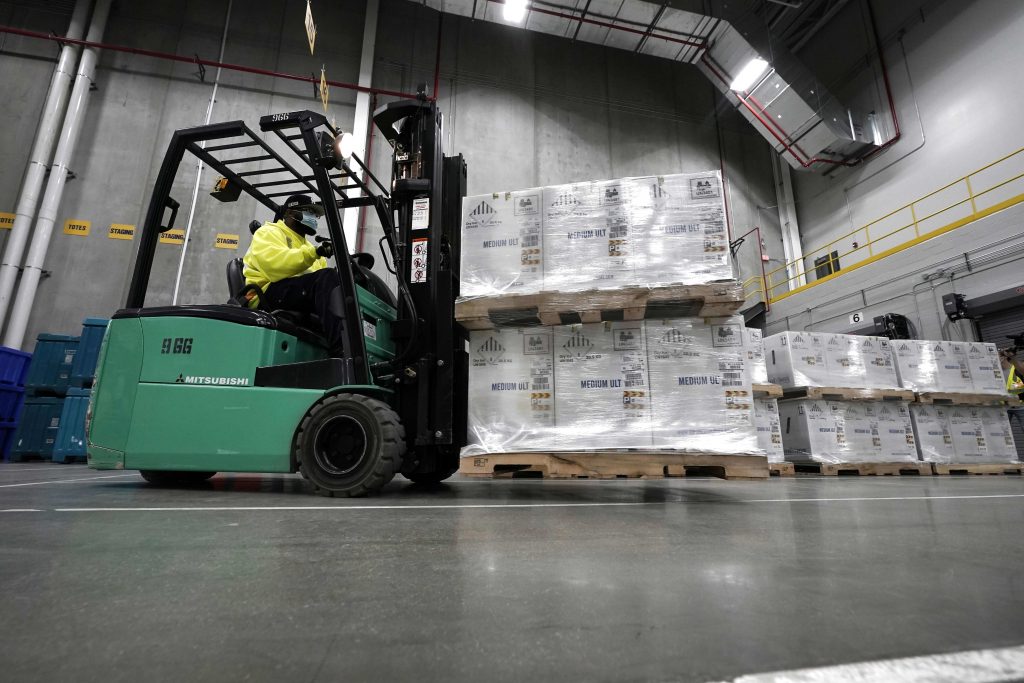