WASHINGTON (Reuters) – House Speaker Nancy Pelosi said on Sunday differences remain with President Donald Trump’s administration on a wide-ranging coronavirus relief package but she was optimistic legislation could be pushed through before Election Day.

Pelosi, the top elected Democrat, said she wanted a bill passed before the Nov. 3 presidential election between Republican Trump and Democrat Joe Biden but acknowledged an agreement would have to come within 48 hours for that to happen.

“I’m optimistic because, again, we’ve been back and forth on all of this,” Pelosi said in an interview with ABC’s “This Week.”

However, with her negotiating partner, Treasury Secretary Steve Mnuchin, in the Middle East until Tuesday, a deal appears to be a long shot.

The White House proposed a $1.8 trillion stimulus last week to help Americans struggling with the economic ravages of the coronavirus pandemic. Pelosi said the offer fell short in a range of areas including tax credits for poor people, aid to state and local governments, worker protections and rent help. She has stuck to her demand for a $2.2 trillion aid and stimulus package.

The Republicans who control the Senate, however, are loath to pass another giant relief bill. Senate Majority Leader Mitch McConnell said the Senate would vote next week on relief measures totaling more than $500 billion to target specific areas of need. Democrats have rejected so-called skinny bills with pared-down funding, saying much more is needed.

After Mnuchin said last week the White House broadly accepted Democrats’ language on testing, it was clear the devil was in the details.

“They took out 55% of the language that we had there for testing and tracing. And the tracing part is so important because communities of color had been disproportionately affected by this,” Pelosi said on ABC.

“We don’t have agreement on the language yet. But I’m hopeful.”

(Reporting by Doina Chiacu in Washington; Editing by Daniel Wallis and Matthew Lewis)

Sun Oct 18 , 2020
Riot police officers use pepper spray as they clash with demonstrators during a protest against the Czech government’s restrictions imposed to slow the spread of the coronavirus disease (COVID-19), in Prague, Czech Republic, October 18, 2020. REUTERS/David W Cerny October 18, 2020 PRAGUE (Reuters) – The Czech Republic, which has […] 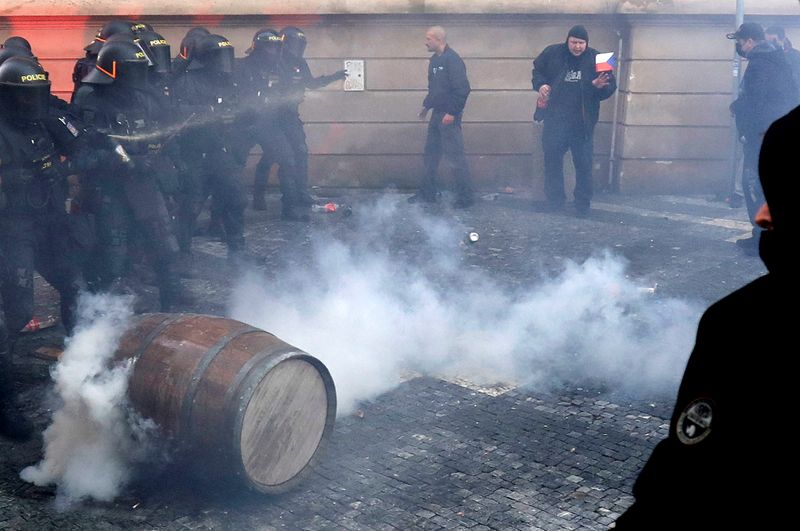