The Dow Jones Industrial Average and S&P 500 rose to all-time highs on Wednesday, with traders cheering the prospects of additional fiscal stimulus as results from the runoff elections in Georgia rolled in.

Stocks traded off their highs, and the CBOE Volatility Index moved higher as protestors stormed the Capitol just after lawmakers began meeting to count the Electoral College votes and declare Joe Biden as the election winner.
Still, the Dow remained solidly higher and Treasurys, normally a safety trade, were lower.

Democrat Raphael Warnock is projected to win the Georgia U.S. Senate special election runoff against incumbent Republican Kelly Loeffler, according to NBC News. In the other Senate runoff election, Democrat Jon Ossoff was leading Republican Sen. David Perdue, but NBC said the race was too close to call.

If both Democrats win, that would make a 50-50 tie in the upper chamber, with Vice President-elect Kamala Harris as the tiebreaker vote to give the party control of the Senate. This outcome could facilitate the passing of new coronavirus relief, raising hope for the country’s economic recovery.

“I think there’s an expectation … that there’s going to be a lot more spending,” Jason Trennert, chairman of Strategas, said on CNBC’s “Squawk Box” on Wednesday. “If the Democrats were to pick up two seats, there’s no question in my mind that later this year there would be a sense that more spending is needed.”

Goldman Sachs expects another big stimulus package to the tune of $600 billion in the near term if Democrats prevail and take the Senate. Certain stocks gained on expectations for additional government aid.

JPMorgan Chase and Bank of America shares were up 4.8% and 6.6%, respectively, amid the 10-year yield topping the 1% milestone as higher rates should help their bottom lines.

Tom Lee, head of research at Fundstrat Global Advisors, also pointed out the result brings clarity to the market outlook, which is a positive.

“I don’t know the future, but to me, the ‘uncertainty’ of the election is arguably a bigger overhang than the actual outcome,” Lee said in a note to clients.

Names that could be specifically helped by a Democrat agenda gained. The Invesco Solar ETF (TAN) rose 7.6%.

Tech stocks — the best-performing market group over the past year — lagged on Wednesday amid concerns over higher tax rates. The prospects of new stimulus also made tech stocks less attractive relative to beaten-down cyclical names. Facebook and Amazon both fell at least 2%, and Netflix dipped 2.5%.

“In the immediate term, markets are pricing in more stimulus. From an equity standpoint, that means tech underperformance and cyclical/value outperformance,” Tom Essaye, founder of Sevens Report, said in a note. “The biggest takeaway from the Democrats win is more power behind the cyclical/value/higher rates trade.”

On the data front, private payrolls fell 123,000 in December, marking the first contraction since the early days of the pandemic, according to a report from ADP. Economists surveyed by Dow Jones had been expecting growth of 60,000.

“It is my considered judgement that my oath to support and defend the Constitution constrains me from claiming unilateral authority to determine which electoral votes should be counted and which should not,” Pence said in a three-page letter addressed to “Dear Colleague.”

Wed Jan 6 , 2021
WASHINGTON – Vice President Mike Pence was ushered out of the Senate as the U.S. Capitol Complex went into lockdown due to an external security threat, while Trump supporters rioted outside the building. A member of the Senate told NBC News that Vice President Pence and Sen. Charles Grassley, the […] 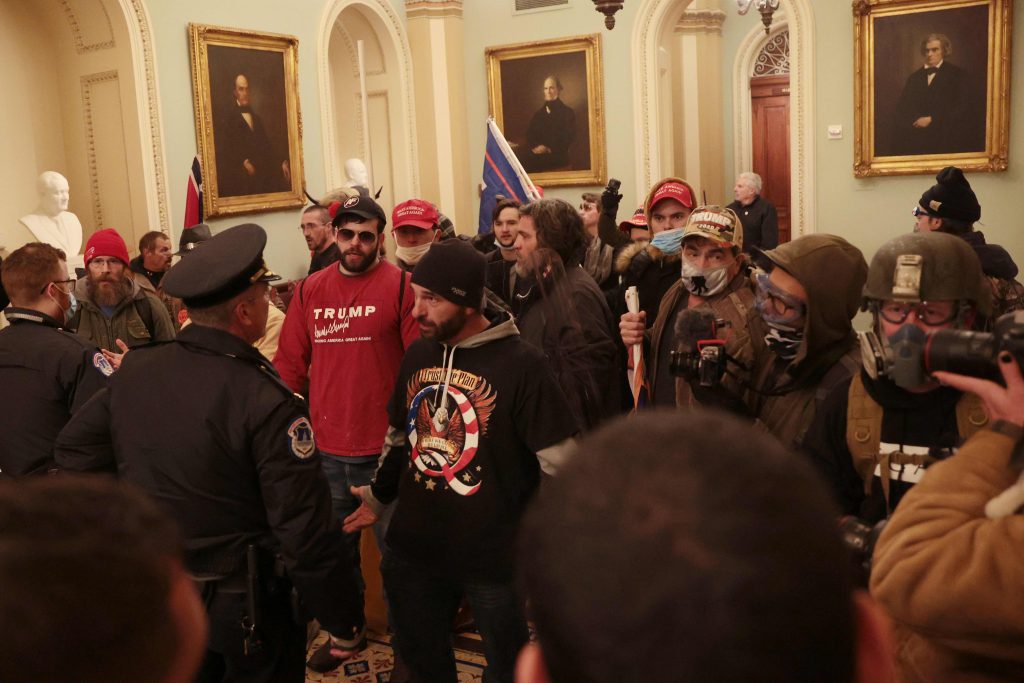