U.S. District Judge Emmet Sullivan cancelled a hearing that was scheduled for next week in regards to a case pertaining to ex-National Security Adviser General Michael Flynn.

Flynn’s attorney Sidney Powell filed a 161-page brief demanding the government produce all evidence related to Flynn. The brief encouraged the court to “dismiss the entire prosecution for outrageous government misconduct” and hold the prosecutors in contempt.

#BREAKING: Judge Sullivan has cancelled our hearing in early November because of the “comprehensive briefing” of the parties. To see the full brief and exhibits (160 pages) filed on behalf of @GenFlynn, see https://t.co/173MnvRx0S @BarbaraRedgate @JosephJFlynn1 @GoJackFlynn

The document was filed last week. It alleges that FBI agents manipulated official records of Flynn’s 2017 interview that led to him being charged with lying to investigators.

The case against Flynn began after a 2017 FBI interview, in which Flynn was asked about his conversations with former Russian Ambassador Sergey Kislyak.

In the end, Flynn pleaded guilty to making false statements in regard to conversations that took place during his interview which was part of former Special Counsel Robert Mueller’s investigation.

Powell has alleged in the court filings that FBI officials manipulated Flynn’s FBI 302, which is a form used by agents to report or summarize interviews. It is alleged that the form was edited and by the way, ex-FBI agent Peter Strzok was involved in the original interview that took place.

In response to whether Mr. Flynn had asked Kislyak to vote in a certain manner or slow down the UN vote [on sanctions], Powell wrote, “Those changes added an unequivocal statement that ‘Flynn stated he did not.’ This is a deceptive manipulation because, as the notes of the agents show, Mr. Flynn was not even sure he had spoken to Russia/Kislyak on the issue. He had talked to dozens of countries.”

Powell also alleged that agents added the phrase, “or if Kislyak described any Russian response to a request by Flynn.”

Powell went on to write, “That question and answer does not appear in the notes, yet it was made into a criminal offense. The draft also shows that the agents moved a sentence to make it seem to be an answer to a question it was not.”

It is also alleged by Powell that on January 23, 2017, which was the day before the FBI interviewed Flynn at the White House, “the upper echelon of the FBI met to orchestrate” strategies that would have Flynn talk “in such a way as to keep from alerting him from understanding that he was being interviewed in a criminal investigation of which he was the target.”

Powell added, “In short, they planned to deceive him about the entire scenario, and keep him ‘unguarded.’”

Powell went on to mention newly discovered text messages between former FBI agent, Peter Strzok and former FBI lawyer Lisa Page during the days following the publication of the scandalous anti-Trump dossier, along with media leaks from the FBI and Justice Department. Brought to light, as well, were details surrounding the unexpected recusal of the former judge overseeing the case, U.S. District Judge Rudolph Contreras.

Prosecutors have adamantly denied any claim that they were or are now hiding evidence.

Flynn’s sentencing is still up in the air but the new attorneys are seeking to get the charges dropped even though it is stated by counsel that Flynn doesn’t intend on withdrawing his guilty plea.

At this time Sullivan has set a December 18th sentencing date.

We will have to wait and see if the date gets moved again.

‘So much damage’: Chile protests flare back up as reforms fall short

Tue Oct 29 , 2019
FILE PHOTO: A man prepares to throw a speaker into a burning barricade while vandalizing a shop during a protest against Chile’s state economic model in Concepcion, Chile October 28, 2019. REUTERS/Juan Gonzalez/File Photo October 29, 2019 By Dave Sherwood and Fabian Cambero SANTIAGO (Reuters) – Chileans took to the […] 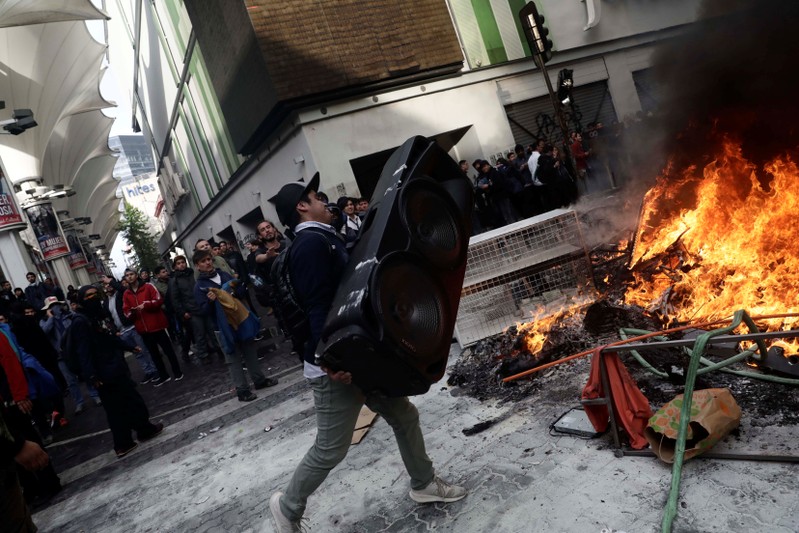