How far people’s money will go — and how easy it will be to earn it — are at the top of Americans’ minds when they think about where they would like to live. When asked what is the most important factor in deciding where to live, Americans put employment opportunities as the top of their considerations, followed closely by the cost of living. These economic factors tend to be a higher priority than how far away family is, the type of people who live in the community, or the climate and the geography — and far ahead of concerns about the schools or recreational activities in the area.

Employment opportunities are particularly on the minds of younger Americans – and clearly the top choice of Americans under the age of 45. For those between 45 and 64, the cost of living is just as much a factor as employment. And for seniors 65 and older, proximity to family as well as climate and geography start to play an important part in what they prioritize.

We asked those surveyed to put aside more practical considerations and think about what their “dream home” might look like, and where their ideal location would be. As it turns out, most Americans don’t want a bigger home. Forty-one percent do want a bigger home, though even more — 48% — say that the size of their current home is just right. Still, few say their dream home would be smaller than the one they live in now.

And there is little consensus when it comes to what type of area Americans would place their “dream home.” A house by the ocean is the top choice, but just barely. Nearly as many Americans pick “the mountains” or “on a lake,” and one in five Americans say their ideal location would be in a city. A dream home in the desert is the top choice of just 3% of Americans.

Moving is a part of life for the vast majority Americans: just 6% say they have never changed addresses (though this rises to 16% of Americans under the age of 30). Most, however, haven’t moved very often: Fewer than half say they have moved more than five times over the course of their lives. Americans with higher income and education levels tend to have moved more often than those with lower incomes and less education.

This poll was conducted by telephone May 11-16, 2021 among a random sample of 1,008 adults nationwide.  Data collection was conducted on behalf of CBS News by SSRS of Glen Mills, PA.  Phone numbers were dialed from samples of both standard landline and cell phones.

The poll employed a random digit dial methodology. For the landline sample, a respondent was randomly selected from all adults in the household. For the cell sample, interviews were conducted with the person who answered the phone.

Interviews were conducted in English and Spanish using live interviewers. The data have been weighted to reflect U.S. Census figures on demographic variables. The error due to sampling for results based on the entire sample could be plus or minus 3.6 percentage points. The error for subgroups may be higher and is available by request. The margin of error includes the effects of standard weighting procedures which enlarge sampling error slightly. This poll release conforms to the Standards of Disclosure of the National Council on Public Polls.

With more border crossers, US groups seek to stem deaths

Sat May 22 , 2021
FALFURRIAS, Texas — Every week, migrant rights activist Eduardo Canales fills up blue water drums that are spread throughout a vast valley of Texas ranchlands and brush. They are there for migrants who venture into the rough terrain to avoid being caught and sent back to Mexico. The stretch of […] 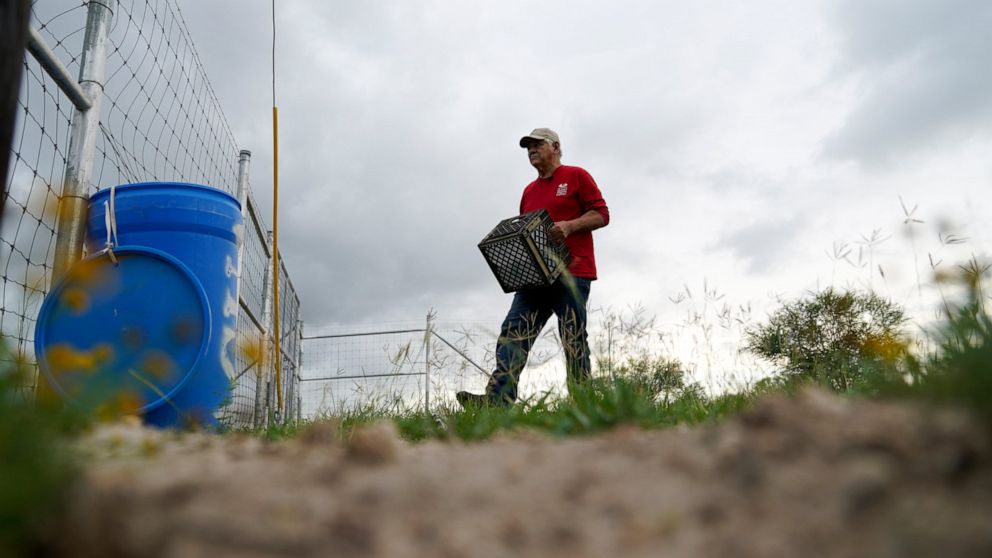