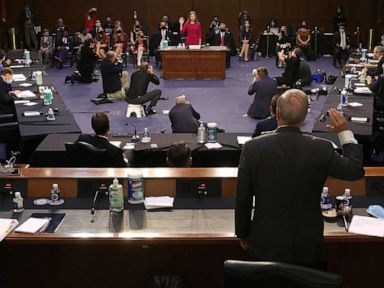 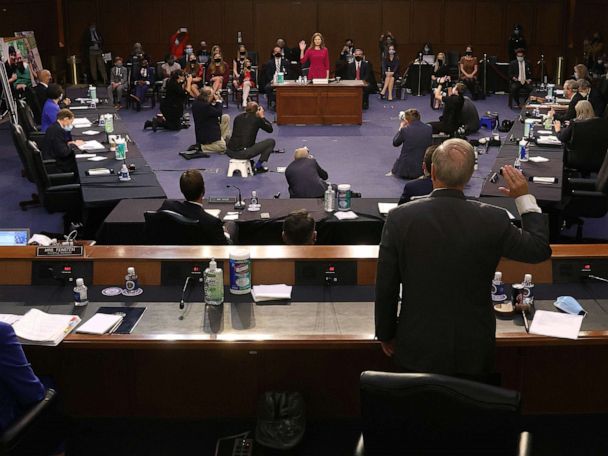 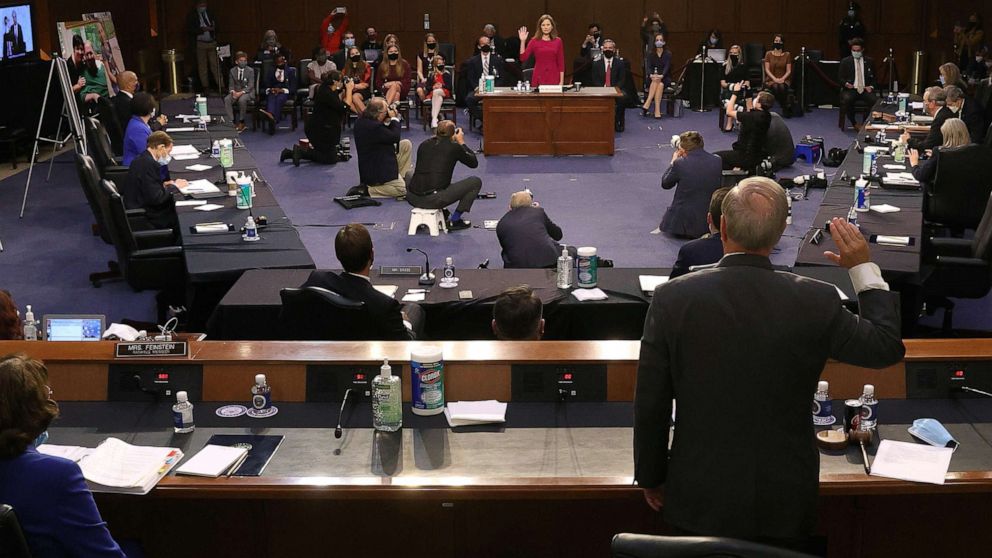 The Senate Judiciary Committee on Monday spent roughly five hours hearing opening statements from lawmakers and Judge Amy Coney Barrett, as they began considering her nomination to the Supreme Court.

While the outcome of the process is not in doubt — Republicans have the votes and the political will to report her nomination to the full Senate chamber and tee up a final vote before Election Day — senators previewed their strategies for handling the controversial confirmation process unfolding as Americans are already voting in states across the country.

Here are five takeaways from day one:

While they have railed against Republicans for weeks for moving forward with Barrett’s nomination after refusing to hold any hearings for Judge Merrick Garland, President Barack Obama’s Supreme Court nominee in 2016, Democrats are essentially powerless to delay or derail the confirmation process until 2021.

But instead of boycotting the proceedings, as some progressive activists have demanded, Democrats used their opening statements to highlight the stakes of Barrett’s confirmation — which would give conservatives a 6-3 majority on the Supreme Court and potentially imperil elements of the Affordable Care Act, as a challenge to Obama’s landmark health care law is scheduled to come before the court in November.

Using poster boards and testimonials, Democrats highlighted the health care concerns of their constituents, linking the challenge to the health care law to the ongoing coronavirus pandemic — and the millions of infected Americans who now have a pre-existing condition.

“In filling Judge Ginsburg’s seat, the stakes are extraordinarily high for the American people both in the short term and for decades to come. Most importantly, health care coverage, for millions of Americans, is at stake with this nomination,” said Sen. Dianne Feinstein, D-Calif., the top Democrat on the panel.

It’s a message that, along with the focus on abortion, Democrats hope will resonate with voters in the presidential election, two years after Democrats won back control of the House of Representatives by relentlessly hammering Republicans on efforts to repeal Obamacare.

Republicans repeatedly returned to Barrett’s Catholic faith, and accused Democrats of criticizing her on the grounds of her religion.

“We don’t have religious tests. The committee isn’t in the business of deciding whether the dogma lives too loudly within someone,” said Sen. Ben Sasse, R-Neb., in a reference to a comment Feinstein made in Barrett’s 2017 hearing for the federal bench that Republicans have seized on.

Barrett, if confirmed, would be the sixth Roman Catholic justice on the Supreme Court. While no Democrat on the committee even mentioned the nominee’s faith on Monday, accusations of religious persecution have animated GOP voters and defenders of Barrett’s nomination, and could also galvanize grassroots support for Republicans that Trump and many senators up for reelection are counting on to help them win in November.

For their part, Republicans also touted Barrett’s history-making potential as the first woman nominated to the Supreme Court with school-age children, and depicted her as a successor to the late Justice Ruth Bader Ginsburg, and her trailblazing legacy for women in the legal world.

“When I was 21 years old and just beginning my career, Ruth Bader Ginsburg sat in this seat,” Barrett said. “She told the committee, ‘What has become of me could only happen in America.’ I have been nominated to fill Justice Ginsburg’s seat, but no one will ever take her place.”

Senate Judiciary Committee Chairman Lindsey Graham of South Carolina and Sen. Chuck Grassley of Iowa were two of the most vocal Republicans opposed to considering Garland’s nomination in 2016, calling for Americans to weigh in on the court’s future in the presidential election that year.

“If an opening comes in the last year of President Trump’s term, and the primary process has started, we’ll wait to the next election,” Graham said in 2018. “Hold the tape.”

But they’ve since aggressively defended Trump’s right to fill the vacancy on the court, pointing to Republican control of both the White House and the Senate.

“There is nothing unconstitutional about this process,” Graham said, though he acknowledged that Democrats were “right” that a precedent had been broken with a vote this close to the election. “This is a vacancy that has occurred through a tragic loss of a great woman and we’re going to fill that vacancy with another great woman. The bottom line here is that the Senate is doing its duty.”

Democrats used the words “hypocrisy” or “hypocritical” at least eight times Monday, pounding Republicans for the aggressive timetable they laid out for Barrett’s confirmation just weeks from Election Day.

“Americans have already voted, Mr. Chairman, let’s end this hypocritical, illegitimate hearing and return to the urgent work we have before us, to help those suffering,” Sen. Mazie Hirono, D-Hawaii, said in one of several calls from Democrats for the chamber to instead take up a coronavirus relief package.

Sen. Richard Blumenthal, D-Conn., called on Barrett to commit to recusing herself from any election-related cases that could come before the Supreme Court in the wake of the upcoming presidential race.

With the coronavirus pandemic disrupting voting across the country, and virtually every state scrambling to adjust voting rules and prepare for an unprecedented level of absentee ballots, both Republicans and Democrats are girding for potential legal fights across the map that could play out like the dramatic Florida recount in 2000 across multiple battleground states.

“They’ve stripped the American people of their say in this process simply to confirm a justice who will strike down in court, legislate from the bench what they can’t repeal in Congress,” he said. “Your participation — let me be very blunt — in any case involving Donald Trump’s election would immediately do explosive, enduring harm to the court’s legitimacy and to your own credibility. You must recuse yourself.”

His comments could foreshadow a line of inquiry Democrats could pursue later this week with Barrett — forcing the nominee to respond to Trump’s repeated comments about challenging the results of a “rigged” election and refusing to commit to a peaceful transfer of power.

The coronavirus pandemic overshadowed everything in the committee hearing room on Monday. With every mask-wearing senator, bottle of hand sanitizer and wide shot of the socially distanced seating arrangement in the Senate’s largest hearing room, it was a reminder of the virus that has upended life in the United States and around the world.

Sens. Mike Lee, R-Utah, and Thom Tillis, R-N.C., both tested positive for the coronavirus in the wake of the White House event announcing Barrett’s nomination several weeks ago.

While Lee was in attendance Monday, citing the approval of the Office of the Attending Physician on Capitol Hill, Tillis participated remotely, as did several Democrats — including Sen. Kamala Harris, D-Calif., the Democratic vice presidential nominee, and Sen. Pat Leahy, D-Vt., a former chairman of the panel.

Democrats had called for Republicans to push back the hearing, and for everyone participating to get tested for the virus, something Graham rejected — just days after his Senate opponent, Democrat Jaime Harrison, refused to debate him without a negative coronavirus test.

“I made a decision to try to make the room as safe as possible, but to come to work while millions of Americans are going to work today, somebody may have tested positive in a restaurant, military unit, fire department or police department,” Graham said Monday. “You make it as safe as possible. You manage the risk, and you go to work. I’m not going to be told to be tested by political opponents.”

All attendees and participants appeared to comply with the hearing’s strict distancing and mask requirements, though White House chief of staff Mark Meadows refused to talk to reporters at a stakeout outside the hearing room when he was asked to keep his mask on during the conversation.

Meadows, who is tested regularly, has been in close contact with Trump since his coronavirus infection, and even stayed with him overnight at Walter Reed Medical Center last week.

1 dead in shooting at Denver protest

Tue Oct 13 , 2020
A man working as a security guard for a local news station at a Denver protest is in jail, being held without bond and suspected of first-degree murder after a violent clash over the weekend left one man dead. Omar Villafranca reports. (Warning: Some viewers may find the following video […] 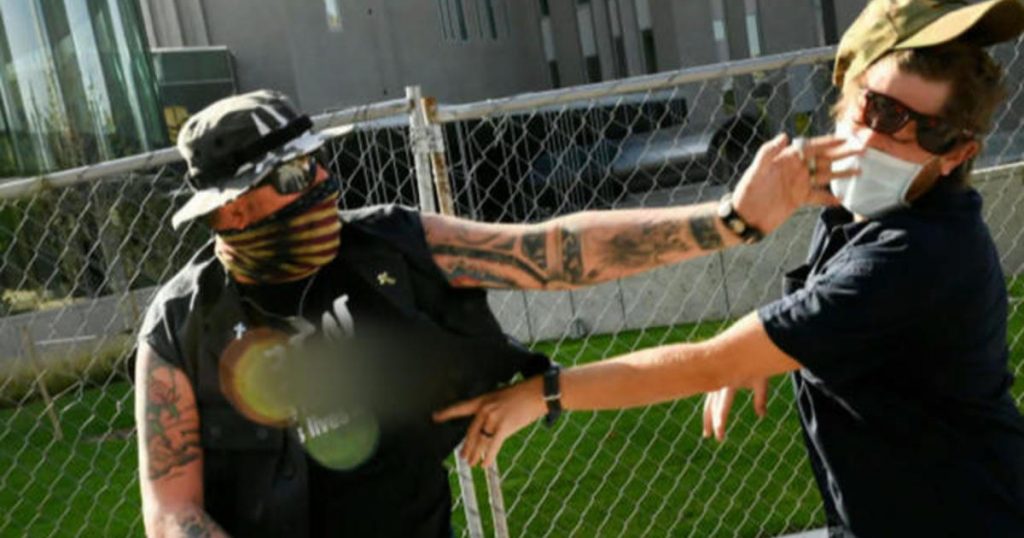