What turns a former Planned Parenthood clinical director into a pro-life activist? A new controversial film is coming to theaters soon and will tell the story.

Thirty-eight year old Johnson told FOX News in a written statement, “We are pushing the boundaries of what has never been before on such a wide scale by showing America exactly what abortion is — and abortion is disturbing. It’s violent.”

Johnson went on to say, “In my opinion, one of the most impactful films of our time is ‘The Passion of the Christ.’ It was rated R. So I feel like ‘Unplanned’ is in good company. An R rating from the MPAA isn’t going to slow this movie down. I believe people are ready for the truth.”

Pure Flix is the production and distribution company behind the film. It is a Christian movie studio that produces, distributes, and acquires “Christ centered movies,” according to its mission statement.

Michael Scott, president of Pure Flix said, “This is why Pure Flix exists: to give a platform to these types of movies. We’re proud to be associated with this film and we are confident that our fans will not stay away because of the opinions of reviewers and listen to those in the faith community who have seen the film and agree with us. In this case, R stands for recommended.”

Mike Lindell, an investor in “Unplanned” dismissed the ‘R’ rating by the MPAA which is the Motion Picture Association of America.

The co-writers and co-directors of the film, Cary Solomon and Chuck Konzelman said, “We consider the MPAA’s current standards to be deeply flawed, insofar as they allow scenes of remarkably graphic sex, violence, degradation, murder and mayhem to have a PG-13 rating, whereas our film, highlighting the grave dangers of abortion in a straightforward manner, is considered dangerous for the American people to view.”

Lindell said, “Unplanned” tells the true story of Abby Johnson, who previously worked at Planned Parenthood as a clinic director, but resigned in 2009 and became a pro-life activist. (Pure Flix)

Lindell feels that “the fix is in. Whoever rated this movie must not be watching TV or videos on social media! I have a cameo in this movie and do not appreciate the R-rating. I got involved to get a message out to everyone with this true story. What a shame that some might be blocked by an R-rating from getting the truth. I hope millions of Americans will ignore this attempt at moviegoer suppression and flood the box office on opening day.”

MPAA told Pure Flix the most problematic scene of “Unplanned” featured a doctor gazing at a computer screen that shows the image of a fetus as the abortion is completed. Dr. Anthony Levatino, who was portrayed in the scene, said the depiction is accurate.

Ken Rather, executive VP of distribution for Pure Flix said, “A 15 year-old-girl can get an abortion without her parent’s permission but she can’t see this movie without adult supervision? That’s sad.”

Levatino, who performed about 1,200 abortions over the years said, “The portrayal of a live, moving fetus disappearing is very accurate. You’re watching an abortion. It’s an accurate view of what’s happening. It’s disturbing if you recognize it’s a human life.”

Solomon claimed, “We have three scenes in the film which directly address abortion, and the MPAA objected to all three. They specifically made mention of objection to grainy, black and white sonogram images that were part of one of the scenes. It was clear that any meaningful treatment of the issue was going to be objectionable.”

I’m not the person rating the film but whatever the rating, this film is important for people to see. Maybe it can enlighten some who look at abortion as a normal part of life.

Just maybe the movie can change the mind of someone who thinks they should have an abortion. Furthermore, maybe the film can save the lives of innocent babies, through no fault of their own, are not wanted.

Trailer to the film, “Unplanned”:

More videos you may find interesting:

Rosenstein: Barr will do "the right thing" with Mueller report

Mon Feb 25 , 2019
Deputy attorney general Rod Rosenstein believes special counsel Robert Mueller’s final report on the investigation into Russian meddling during the 2016 presidential election will be handled appropriately by the new attorney general, William Barr.  Asked Monday about the report’s highly-anticipated release and deliberations at the Department of Justice on whether […] 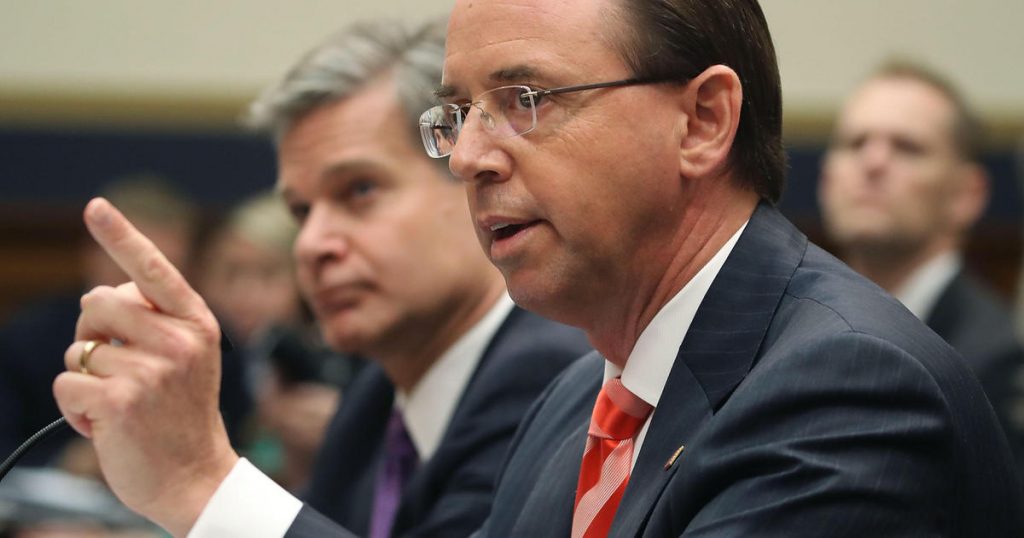