U.S. stock index futures pointed to a market rebound on Monday as the S&P 500 comes off its longest daily losing streak since February.

All three major averages finished lower on Friday. The Dow and S&P posting a fifth straight day of losses, while the Nasdaq Composite registered its third consecutive negative session. For the S&P 500, that was its worst losing streak since February 22.

Covid cases appear to be trending lower in the U.S. with a 7-day average through Friday of about 136,000, down from 157,000 average new cases at the end of August, according to the CDC. Pfizer’s Covid vaccine could be authorized for children by the end of next month, sources familiar told Reuters.

“Vaccinations plus immunity should mean cases eventually fall. Full reopening and related spending has been pushed out,” wrote UBS strategist Keith Parker, who sees the S&P 500 gaining another 4% through year-end.

It was a broad bounce with tech shares gaining as well. Apple added about 1% in premarket trading Monday ahead of a launch event Tuesday where the company is expected to introduce new iPhones.

All three futures contracts were muted earlier as investor sentiment may have taken a hit from heavy losses seen in Asia trading on Monday, where Hong Kong’s Hang Seng index dropped about 2% amid regulatory fears surrounding sectors such as financial technology and electric vehicles.

Inflation fears have contributed to the market’s recent losses. Data released Friday showed that producer prices rose 0.7% in August and 8.3% year over year, which was the biggest annual increase since records were first kept in November 2010.

The closely watched consumer price index will be released on Tuesday, at which point the Street will see how much of the heightened costs are being passed along to consumers. Economists surveyed by FactSet are expecting the reading to show that consumer prices jumped 5.3% on an annual pace in August. Retail sales data will be released later in the week.

“Supply bottlenecks, inventory shortages, higher commodity prices, and higher shipping rates have all contributed to higher input costs,” noted Charlie Ripley, senior investment strategist for Allianz Investment Management. “[Friday’s] data on wholesale prices should be eye-opening for the Fed, as inflation pressures still don’t appear to be easing and will likely continue to be felt by the consumer in the coming months,” he added.

Stocks have been under pressure since August’s jobs report, released by the Labor Department on September 3, missed expectations. Worries are rippling through the market that the pandemic will continue to hamper economic growth while hot inflation will prompt the Federal Reserve to take action.

“The negative impact of the delta variant on the cyclical trade is clear,” noted strategists at Jefferies. “It is increasingly evident that the impact of delta has delayed any Federal Reserve attempt at tapering, just as it has given fresh momentum to the Big Tech stocks with growth outperforming value so far this quarter.”

The Federal Reserve will begin its two-day policy meeting on September 21, where investors will be looking for clues about the central bank’s bond-buying program.

Last week, the Dow and S&P dipped 2.15% and 1.69%, respectively, which was each average’s worst weekly performance since June. The tech-heavy Nasdaq posted its worst week since July, sliding 1.61%.

Despite last week’s losses, the major averages are still relatively close to their record levels. the Dow is 2.87% from its all-time high, while the S&P is 1.92% below its high-water mark. The Nasdaq Composite, meanwhile, has slid 1.87% from its record.

For the year all three have registered double-digit percentage gains, but the ongoing impact from Covid-19 could slow the pace of recovery.

“The outlook for post-pandemic economic growth has cooled in time for autumn,” Goldman Sachs said Friday in a note to clients. “Within the market, pricing for months has reflected the weakening economic environment,” the firm said. Last week Goldman cut its GDP growth projection for the fourth quarter, citing the delta variant’s impact on consumer spending.

Mon Sep 13 , 2021
Bratislava, Slovakia — Pope Francis carefully rebuked the anti-migrant politics of Hungarian Prime Minister Viktor Orban on the first day of a papal visit to Central Europe. Speaking at an outdoor Mass in Budapest on Sunday, the pontiff called on Hungarians to “extend their arms to everyone,” in a veiled reference […] 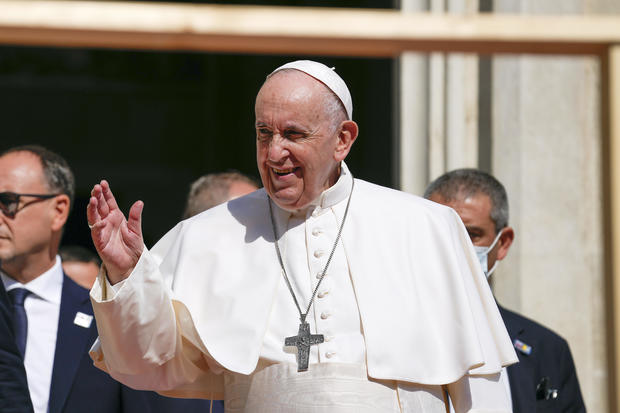