BEIJING (Reuters) – China’s exports fell in June as the United States ramped up trade pressure, while imports shrank more than expected, pointing to further strains on the world’s second-largest economy.

China’s manufacturers are struggling with sluggish demand at home and abroad, and a sharp U.S. tariff hike announced in May is threatening to crush already-thin profit margins, reinforcing views that Beijing needs to announce more stimulus measures soon.

Exports fell 1.3% from a year earlier, not as bad as the 2% drop analysts had expected but reversing a surprise gain in May, customs data showed on Friday.

Imports fell 7.3%, a sharper drop than the 4.5% forecast by analysts and following a 8.5% contraction in May, suggesting domestic demand remains tepid despite a flurry of growth boosting measures since last year.

That left China with a trade surplus of $50.98 billion last month, compared with a $41.66 billion surplus in May. Analysts had forecast a surplus of $44.65 billion for June.

“The latest U.S. tariff hike probably contributed to this drop, alongside a broader slowdown in foreign demand,” Capital Economics said in a note.

“We don’t expect global growth to bottom out until next year. And while the truce reached between (presidents) Trump and Xi at the G20 late last month removes the immediate threat of further U.S. tariffs, our base case remains that trade talks will break down again before long.”

June marked the first full month of higher U.S. tariffs on $200 billion of Chinese goods, which Washington implemented weeks earlier after trade talks between the world’s largest economies broke down.

Though both sides agreed in late June to resume negotiations, and Washington said it would hold off on additional levies, existing tariffs remain in place.

No timeframe has been set for the new round of trade talks, and the world’s two largest economies remain at odds over significant issues needed for an agreement, raising the risk of a much longer and costlier battle.

China’s trade surplus with the United States, a major source of friction with its biggest trading partner, rose to $29.92 billion in June from $26.9 billion in May.

Fri Jul 12 , 2019
FILE PHOTO: People walk through the lobby of the London Stock Exchange in London, Britain August 25, 2015. REUTERS/Suzanne Plunkett/File photo July 12, 2019 By Ritvik Carvalho LONDON (Reuters) – World shares came within a whisker of posting their first weekly loss since May on Friday and the dollar was […] 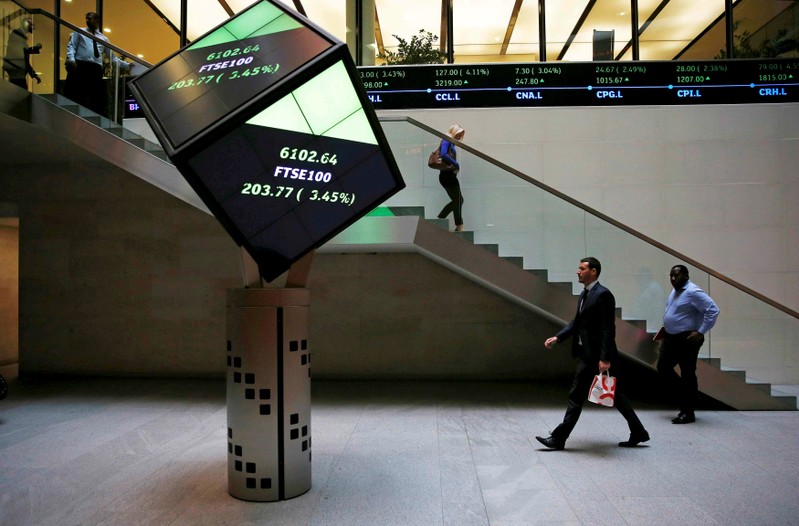