BEIJING/SHANGHAI (Reuters) – Dada-JD Daojia, a Chinese online grocery and delivery firm, said on Thursday it has raised $500 million from Walmart Inc and JD.com Inc in its latest round of financing.

The company comprises of two businesses and is partly owned by JD.com. Dada operates a network of 5 million delivery men, while JD Daojia partners with retail stores and provides one-hour delivery services of groceries and other items.

Walmart said it invested about $320 million in the latest fundraising. The Arkansas-based company’s partnership with Dada-JD Daojia dates back to 2016 when it invested $50 million, the company said, adding that at present, 200 Walmart stores in 30 major Chinese cities have a presence in JD Daojia.

“We are confident that this deeper collaboration with Dada-JD Daojia will enhance our omni-channel footprint and deliver a better O2O (online to offline) customer experience,” said Wern-Yuen Tan, president and CEO for Walmart China.

The global retail giant has been pushing to integrate its retail network in China with the country’s burgeoning “smart retail” movement, as retailers and tech giants such as Alibaba Group Holding Ltd and Tencent Holdings Ltd cut deals to combine shoppers’ online and offline experience.

Earlier this year, Walmart said it opened its first small-sized high-tech supermarket in the southern city of Shenzhen, which will stock products that customers will also be able to buy on the U.S. retailer’s store on JD Daojia. The stores are competing with Alibaba’s Hema to provide fast delivery of grocery to customers.

Alibaba is China’s top e-commerce player, while Tencent is strong in social media and gaming and has, along with Walmart, a considerable stake in number two online retailer JD.com.

Alibaba and Tencent have between them splashed over $10 billion on retail-focused deals, boosting their reach offline and meaning few brick-and-mortar sellers are left without an allegiance to one or the other.

Thu Aug 9 , 2018
A customer pays cash, in front of QR codes for Alipay and Wechat Pay, at a pork stall inside a market in Nantong, Jiangsu province, China August 9, 2018. REUTERS/Stringer ATTENTION EDITORS – THIS IMAGE WAS PROVIDED BY A THIRD PARTY. CHINA OUT. August 9, 2018 BEIJING (Reuters) – China’s […] 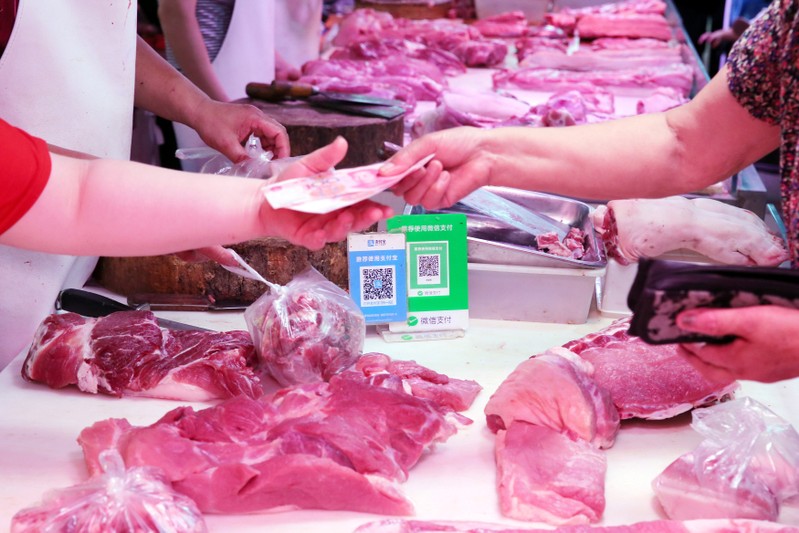