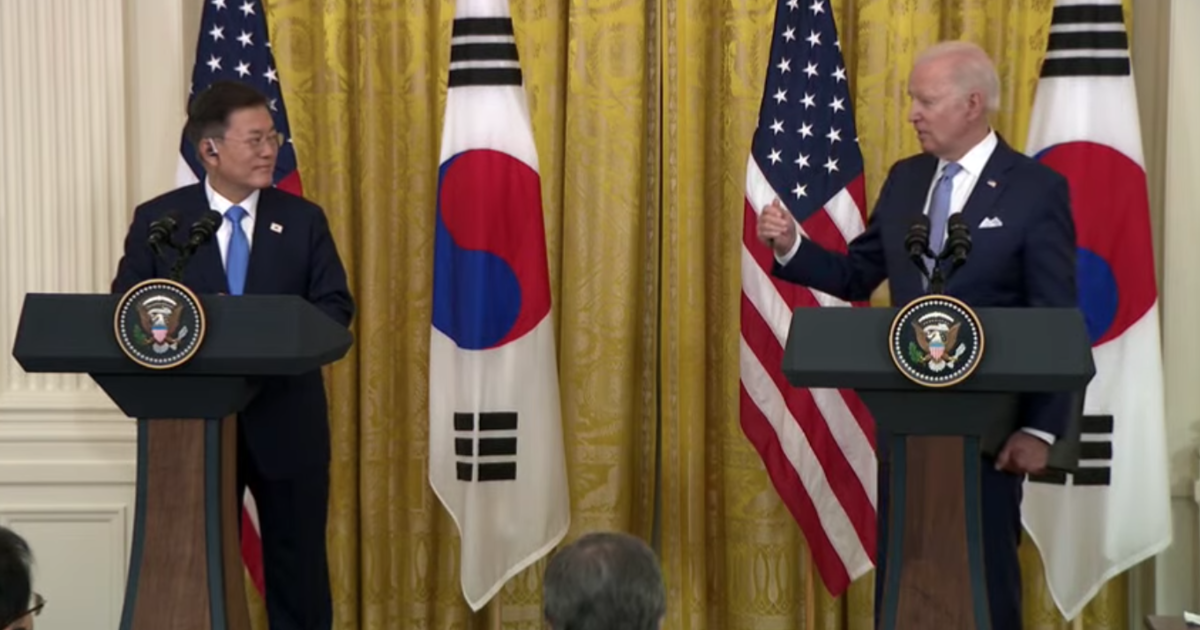 President Joe Biden addressed the key international issues of the nuclear capabilities of North Korea and the Israeli-Hamas conflict in the Middle East at a joint news conference Friday with South Korean President Moon Jae-in. The two leaders addressed the press after meeting for several hours Friday in what was Mr. Biden’s second in-person meeting with a foreign leader since he’s been in office.

Asked if there has been a shift in the Democratic Party’s approach to Israel, given that some progressives are trying to block the Biden administration’s sale of $735 million in weapons to Israel, the president insisted his party’s support of Israel is as strong as ever.

“There is no shift in my commitment to the security of Israel. Period. No shift, not at all,” Mr. Biden said. “But I tell you what there is a shift in: The shift is that we have to, we still need a two-state solution. It is the only answer. The only answer. … My party still supports Israel.”

Still, he told reporters that he had stressed to the Israelis “that I thought it was very important that they stop in Jerusalem, this intercommunal fighting that has extremes on both sides. It has to end.”

The president also said that his administration would try to work with other nations on a package to help rebuild the homes destroyed in Gaza — without providing Hamas with the opportunity to rebuild its weapons systems. “They need the help, and I am committed to get that done,” he said.

Mr. Biden said he and Moon made progress in addressing the threat of North Korea, with the goal of moving toward a denuclearized North Korea. But it’s unclear exactly how much progress has been made, and he also said that he is “deeply concerned” about North Korea. In response to a question from CBS News chief White House correspondent Nancy Cordes, Mr. Biden said that he hasn’t ruled out a meeting with North Korean leader Kim Jong Un, but there would have to be a commitment to discussion about the North’s nuclear arsenal and denuclearization, as well as an agreed-upon outline on how to proceed.

For his part, Moon said through a translator that the most urgent common goal the nations share is establishing a denuclearized and peaceful Korean Peninsula. The Biden administration recently completed a review on policy related to North Korea and according to a senior administration official, the policy “will not focus on achieving a grand bargain, nor will it rely on strategic patience.”

Instead, it’s aiming for “a calibrated, practical approach that is open to and will explore diplomacy with the DPRK to make practical progress that increases the security of the United States, our allies, and our deployed forces,” the official told reporters Thursday.

Moon said earlier this month in a press conference that he would press Mr. Biden to reopen diplomatic discussions with North Korea during their meeting.

“I will not be pressed by time or become impatient during the remainder of my term,” said Moon at the time. “However, if there is an opportunity to restart the clock of peace and advance the peace process on the Korean Peninsula, I will do everything I can. I look forward to North Korea responding positively.”

Mr. Biden also announced during the news conference that Ambassador Seung Kim, a career diplomat and with deep policy expertise, will serve as U.S. special envoy to the DPRK.

After the presser, fielding a few reporters’ questions, Mr. Biden was asked if he would prevent his Justice Department from seizing reporters’ phone records. He responded, “Absolutely, positively it’s wrong. It’s simply simply wrong. I will not let that happen.”

Fri May 21 , 2021
“Complete shutdowns of some ambulance assembly lines [are] highly likely.” May 21, 2021, 11:45 PM • 5 min read The global microchip shortage is now threatening the nation’s ambulance supply. Ford, which supplies around 70% of the ambulance chassis used in the U.S., shut down production at various plants in […]