WASHINGTON (Reuters) – Democratic presidential nominee Joe Biden’s campaign strove on Sunday to keep its focus on the nation’s response to the coronavirus pandemic, as President Donald Trump received treatment for COVID-19 at a military hospital.

Biden and his wife, Jill, are due to resume in-person campaigning on Monday in Florida, where opinion polls show a tight race for the state’s crucial 29 electoral college votes less than a month before the Nov. 3 election.

Biden has repeatedly wished the president a speedy recovery. But the former vice president and his aides have used his Republican rival’s positive test to underline a consistent campaign message: Biden would handle the pandemic better than Trump.

In a video https://twitter.com/i/status/1312864232711520257 posted on Twitter, Trump said he had “learned a lot about COVID” during his stay at Walter Reed National Military Medical Center outside Washington.

“I learned it by really going to school — this is the real school, this isn’t the let’s read the book school — and I get it. And I understand it.”

Tony Blinken, the Biden campaign’s foreign policy adviser, shot back https://twitter.com/ABlinken/status/1312873223428681728 on Twitter that Trump’s realizations about COVID-19 were “devastating” at this late stage.

“The time to do that was 200K deaths ago, not when it affected you. We all wish you well but also wish you had done your job. Please do it now,” Blinken said.

Trump’s campaign has begun describing the 74-year-old president as a “warrior” in messages to supporters that call for donations. On Sunday, Trump briefly rode in a motorcade outside his hospital to wave to supporters, igniting criticism he was putting others at risk..

Trump aides have continued to criticize Biden’s cautious approach to the virus.

Jason Miller, a Trump campaign senior adviser, mocked Biden on Sunday for consistently wearing a face mask, telling “This Week” that the 77-year-old Democratic presidential nominee was using masks “as a prop.”

Biden deputy campaign manager Kate Bedingfield told ABC’s “This Week” that the Democratic nominee “has led by example,” citing the campaign’s use of masks, social distancing and limits on the number of people at campaign events.

The United States has recorded 7.4 million coronavirus infections and more than 209,000 deaths in the pandemic, more than any other country.

Voters could judge harshly an approach that continues to downplay the seriousness of the virus, said Kelly Dietrich, a Democratic strategist and founder of the National Democratic Training Committee, a group that trains party candidates.

“This has touched every American’s life,” he said.

In Florida on Monday, Biden will talk to Hispanic voters about his plan to rebuild the U.S. economy after the coronavirus, his campaign said.

More than 3.3 million ballots had already been cast nationwide by Sunday, according to the Elections Project at the University of Florida – as more Americans vote early or by mail to avoid being exposed to the virus at crowded polling places on Election Day.

A Reuters/Ipsos poll taken Friday and Saturday after the president tested positive for the coronavirus, found Biden leading Trump by 10 percentage points nationally and that nearly two-thirds of Americans thought that Trump probably would not have been infected if he had taken the virus more seriously.

As Trump’s doctors and aides gave sometimes unclear messages about the president’s health situation over the weekend, Biden’s campaign said it would publish the results of every COVID-19 test the candidate takes.

Biden would not need to do much to benefit from Trump’s diagnosis, since many Americans already viewed Trump’s approach to the virus as cavalier, said David Greenberg, a historian at Rutgers University.

“They’re going to think that even more now, so I don’t think Biden needs to hammer that home too hard,” he said.

It remains uncertain when Trump will return to the campaign trail, if at all, and whether he will be able to participate in the second presidential debate on Oct. 15. 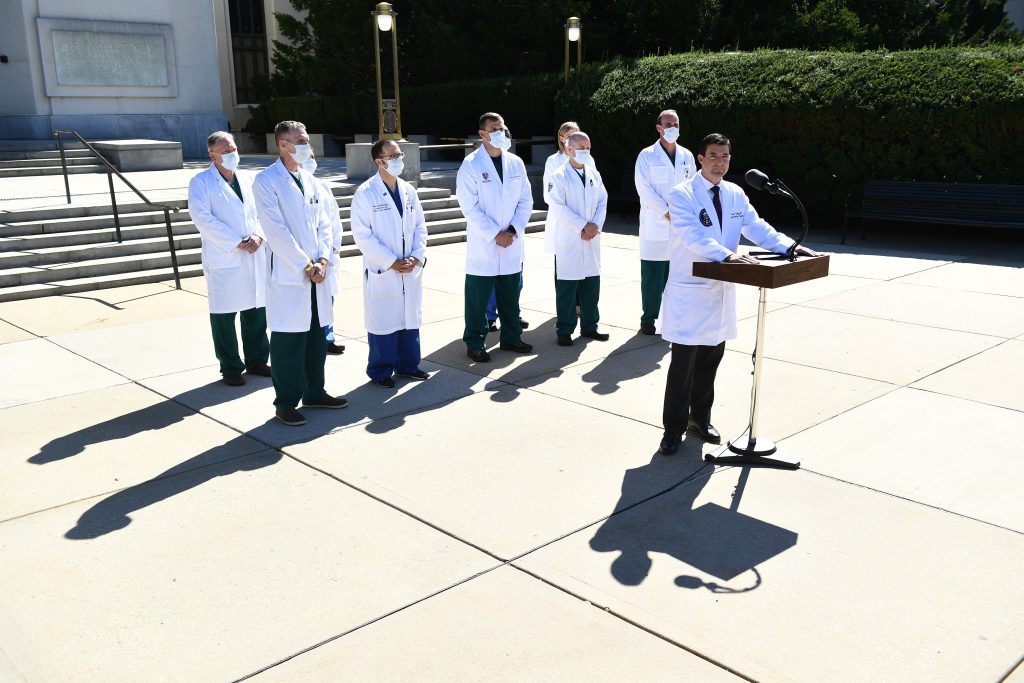