“In some important ways, my generation has failed you,” Cook said Saturday in his commencement speech at Tulane University in New Orleans, La.

“We have spent too much time debating, we have been too focused on the fight, and not focused enough on progress,” Cook, 58 and a member of the Boomer generation, said. Generally, college graduates are part of Generation Z.

“You don’t need to look far to find an example of that failure,” Cook said, referring to New Orleans, where he was speaking.

“Here today, in this very place, where thousands once found desperate shelter from a hundred-year disaster — the kind that seem to be happening more and more frequently — I don’t think we can talk about who we are as people and what we owe to one another without talking about climate change,” Cook said.

Fixing climate change should not be a matter for political debate, Cook said.

“This problem doesn’t get any easier based on whose side wins or loses an election. It’s about who has won life’s lottery and has the luxury of ignoring this issue and who stands to lose everything,” Cook said.

“The coastal communities, including some right here in Louisiana, that are also making plans to leave behind the places they have called home for generations and head for higher ground. The fisherman who nets come up empty. The wildlife preserves with less wildlife to preserve, the marginalized, for whom a natural disaster can mean enduring poverty.”

More broadly, Cook called on the class of 2019 to take action to improve the world they live in.

“Whatever you do, don’t make the mistake of being too cautious,” said Cook. “Don’t assume that by staying put, the ground won’t move beneath your feet. The status quo simply won’t last. So get to work on building something better.”

Apple CEO Tim Cook: ‘Don’t work for money … you will never be happy’

Apple CEO Tim Cook: ‘The world is full of cynics and you have to tune them out’

“Apple innovates like no other company on Earth, and we are not taking our foot off the gas,” said Apple CEO Tim Cook on the company’s earnings call Jan. 29, 2019.

Sat May 18 , 2019
The owner of Maximum Security wants a rematch. The horse finished first at the Kentucky Derby earlier this month but was famously disqualified, and now owner Gary West is offering $5 million to the owners of four of its rivals.  West is extending the offer to Long Range Toddy, War […] 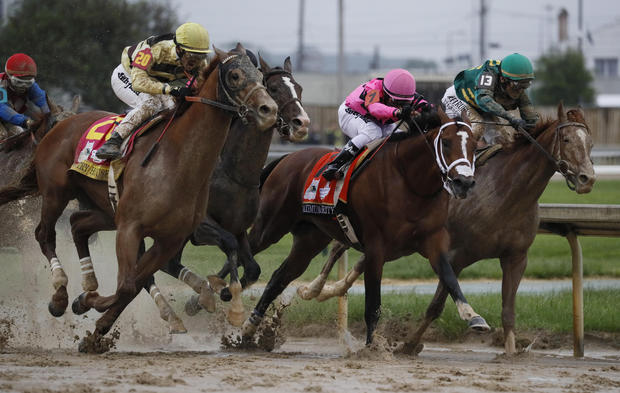