US Attorney John Durham’s office has confirmed the resignation of a top aide to Duham.

On Friday it was confirmed that the federal prosecutor, Norah Dannehy, has resigned from the Department of Justice.

Dannehy was probing the origins of the Trump-Russia investigation and she had worked closely with Durham for years.

There was no reason given, at this time, as to why the resignation came about but The Hartford Courant in Connecticut reported that Dannehy informed colleagues in the New Haven US Attorney’s Office of her resignation on Thursday evening.

The paper mentioned that Dannehy resigned “at least partly out of concern that the investigative team is being pressed for political reasons to produce a report before its work is done.”

The investigation has reportedly been slowed down from the coronavirus pandemic and now this departure of a veteran team player can slow down the final stretch.

Attorney General William Barr appointed Durham over a year ago to investigate the origins of the FBI’s original Russia probe after former Special Counsel Robert Mueller completed his investigation into whether the campaign colluded with the Russians to influence the 2016 presidential election. That itself took years to complete and the end result left much to be desired.

Since Durham has been appointed,  he has questioned former law enforcement and intelligence officials, with former CIA Director John Brennan being among them, about decisions that had been made during the Russia probe.

Dannehy was present for interviews with top officials, including Brennan, because of her position.

This is combined with reports of other DOJ-related resignations on Friday.

It has been reported that John Choi, who served on the Presidential Commission on Law Enforcement and the Administration of Justice, has resigned from the commission. He claimed its intent was providing cover for a predetermined agenda that ignores the lessons of the past.

Durham is focused on the time between July 2016, when the FBI’s original Russia probe began, through the appointment of Mueller in May 2017.

Now that the presidential is getting very close, some Republicans want to see what has been found out.

Even President Trump has asked for results.

At a White House press conference on Thursday Trump said that Durham was a “very, very respected man” and that his work would involve a “report or maybe it’s much more than that.”

One criminal charge against a former FBI lawyer, Kevin Clinesmith, who was accused of altering an email related to the surveillance of a former Trump campaign aide, Carter Page, has been dealt with.

That prosecution did not allege an extensive conspiracy within the FBI or with the conduct it involved.

That much was already laid out in a Justice Department inspector general report that came out last December.

Even though Barr has said that he has not ruled out the possibility of additional criminal charges, he did not affirm that there would be any.

Indictments were supposed to be out in March. Then that date was extended and finally we were told to expect them at the end of the summer.

Well, summer has come and gone. There is not much time left before the election. So, during all this time Clinesmith said he was sorry. Yes folks, that’s all we can be certain of at this time.

To me, it’s like watching a bombastic movie and then during the last half hour the power goes off.

I fear that I’m not going to get the end result that I had been hoping for, in fact, not even close.

The Noose is Loose

Sun Sep 13 , 2020
Today’s experts seem to never get anything right. It’s as though we’ve raised generations of weathermen and women, and spread them throughout the country into universities, the media, and of course politics. For example a recent “expert” just explained that our markets are a raging mania and we could see […] 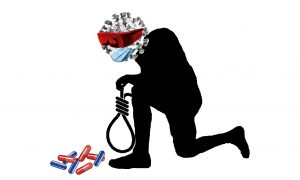