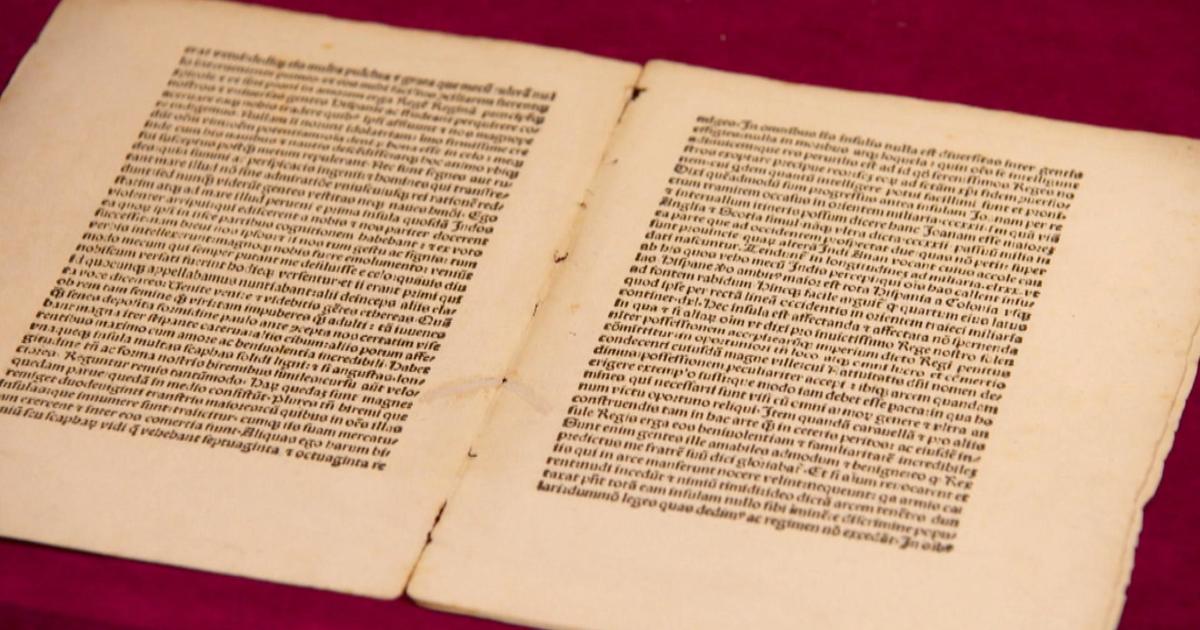 Everybody knows that in 1492, Christopher Columbus sailed the ocean blue. But the explorer was also one of the world’s first best-selling authors. On his journey home, more than 500 years ago, he wrote a letter to his royal patrons, describing his remarkable arrival in the Americas. His letter was copied and multiple printings were made, spreading the news of his historic voyage across Europe. Today only a few of these printed letters still exist. They are rare and valuable treasures, as well as fixtures in the collections of some of the most prestigious libraries in the world. That is, they were until recently. Because their value has also made them a perfect target for forgers and thieves. Jon Wertheim reports on a classic international detective story for the next edition of 60 Minutes, Sunday, October 20 at 7 p.m. ET/PT on CBS.

It was Jay Dillon, a rare book dealer in New Jersey, who first tipped off authorities to the thefts in 2011. The National Library of Catalonia in Barcelona had posted photos of its Columbus letter online. Dillon noticed the letter looked exactly like one he had seen for sale a year earlier, right down to the same  smudge marks in the margins. Dillon suspected the library’s letter had been stolen and put up for sale, which meant whatever was currently in their collection was a fake. And if one letter had been replaced with a forgery, there might be others. Following his instincts, Dillon traveled to Rome and Florence, and discovered, to his great astonishment, two more forged Columbus Letters – one in the Vatican Library and another one in the Riccardiana Library in Florence. He was outraged but not entirely surprised. “[The Letter] was one of the first best-sellers… Each one is now worth… more than $1 million but probably less than $4 or $5 million,” he tells Wertheim.

Jay Dillon went to the U.S. Department of Justice with his startling information and Homeland Security Investigators opened a case. They enlisted the help of Paul Needham, the Scheide librarian at Princeton University, and one of world’s top experts in 15th Century printing, who determined the Columbus letters had indeed been stolen, and replaced with photographic facsimiles printed on centuries-old paper. “The Columbus letter being a highly collected book., it’s just the perfect combination,” he says. “Both very small and very valuable. Their value per leaf of paper is higher than for any other printed book. It’s the perfect item to forge.”

U.S. authorities teamed up with the Italian Caribinieri Police’s Cultural Heritage sqaud, an elite art crime unit based in Rome, which investigates and recovers  stolen art and antiquities on a grand scale. In Italy, it’s a crime market second only to that of illegal drug and weapon sales. Captain Giovanni Prisco of the Carabinieri unit showed Wertheim the warehouse in the back of his police station, which houses one of the most valuable art collections in Europe, including masterpieces from the likes of Ruebens, Tiepolo and Caravaggio – as well as dozens of amphoras and sculptures. Prisco says one of Italy’s biggest challenges these days is protecting its rare books. The country has more than 18,000 libraries. And books are also easy to conceal. “Books, some of them are really small and it’s not difficult to put under your arm or in your jacket.”

Eight years into the joint U.S.-Italian investigation, three stolen Columbus letters have been recovered and returned to their rightful homes, and the case is ongoing.