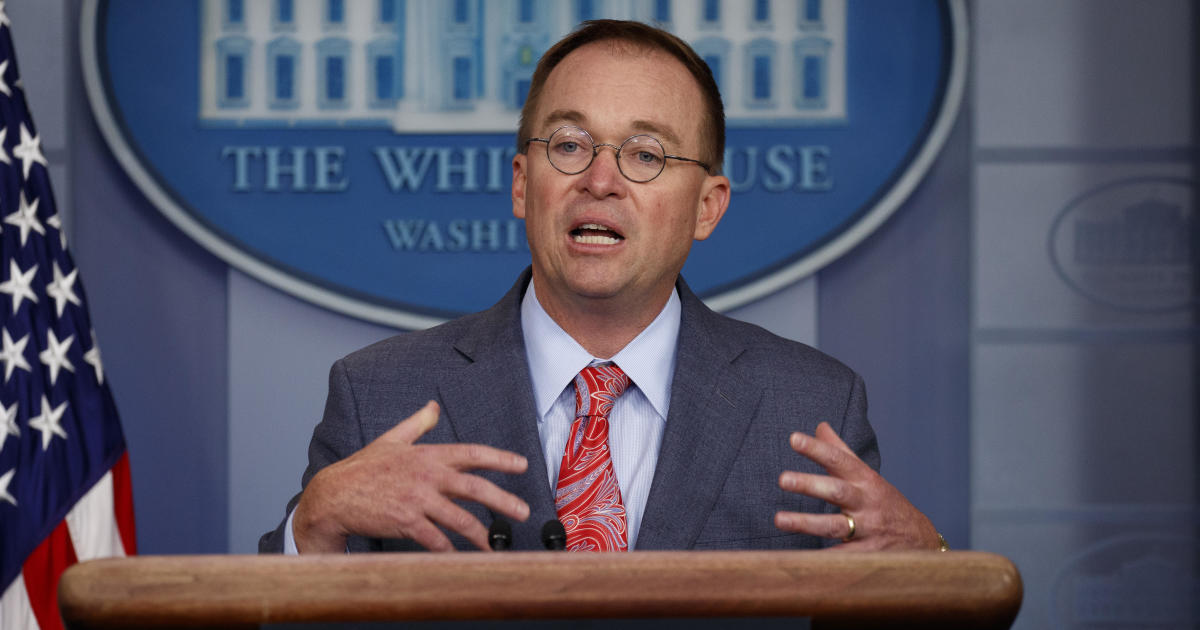 Washington — An internal West Wing feud is pitting the top White House lawyer, Pat Cipollone, against President Trump’s acting chief of staff, Mick Mulvaney, who has been facing criticism from both inside and outside the administration for recently telling reporters that military aid to Ukraine was withheld in part to advance Mr. Trump’s political requests.

Internal feuds are nothing new in the Trump White House. And Mulvaney, like predecessors Reince Priebus and John Kelly, has faced maneuvering against him and rumors of his imminent demise. Mulvaney’s status, however, appears more open to question now, and even his allies consider Cipollone a central rival.

The two top administration officials are now vying for the chief of staff position and Mr. Trump’s support as the White House continues to fend off the launched a month ago by the Democratic-led House, two sources familiar with the intensifying rivalry told CBS News. “It’s a death match,” according to one source.

According to the sources, Cipollone and his allies within the administration faulted Mulvaney for the botched effort to enlist former South Carolina Congressman Trey Gowdy to join the president’s legal defense team to counter the impeachment inquiry.

Those close to Mulvaney contend Cipollone is a bigger problem, primarily his hard-nosed legal advice — so far accepted by Trump — to ignore the House impeachment inquiry and refuse all cooperation with requests for documents and witnesses. One Mulvaney ally described Cipollone’s maneuvering as a “smokescreen for his own malpractice.”

In an effort to retain his White House post, which he is exercising alongside his role as director of the Office of Management and Budget (OMB), Mulvaney has worked extensively to keep in good graces with White House senior advisers Jared Kushner and Ivanka Trump, the two sources said.

During a White House press briefing Thursday, Mulvaney sent tremors throughout Washington when he appeared to brashly admit that the administration had in fact engaged in a quid pro quo with the government of Ukraine.

“[Did] he also mentioned to me, in the past, that the corruption related to the DNC server?” Mulvaney told reporters on Thursday, referring to the president. “Absolutely, no question about that. But that’s it. And that’s why we held up the money.”

“The look back to what happened in 2016 certainly was part of the thing that he was worried about in corruption with that nation. And that is absolutely appropriate,” he added.

The comments undercut the president’s frequent denials of any type of quid pro quo with Ukraine, and they were quickly portrayed by Democrats as a confession that showed the White House had conducted foreign policy with the objective of furthering Mr. Trump’s political ambitions.

Mulvaney tried to walk back his remarks later on Thursday, accusing the media of misconstruing them. On Sunday, he again denied having confirmed a quid pro quo, but conceded that he did not “speak clearly” on Thursday.

And he again defended himself on “Fox News Sunday.”

“You know how back-and-forth is,” Mulvaney said. “You know how rapid-fire it is. Look to the facts on the ground, things that you can actually sort of certify,” arguing that the fact that the White House released the military aid to Ukraine in mid-September proved there had been no quid pro quo involving the Democratic Party. “And what should put this issue to bed is that the money flowed without any connection whatsoever to the DNC server,” Mulvaney said.

Google makes a bold attempt with its latest phone, but it still falls short of Samsung and Apple

Mon Oct 21 , 2019
I’ve been testing Google’s new phone, the Pixel 4, for the past week or so. The device marks Google’s latest attempt to try to stir interest in its hardware business, which lags behind bigger players like Apple and Samsung. Android has been a massive success for Google, but its phone […]