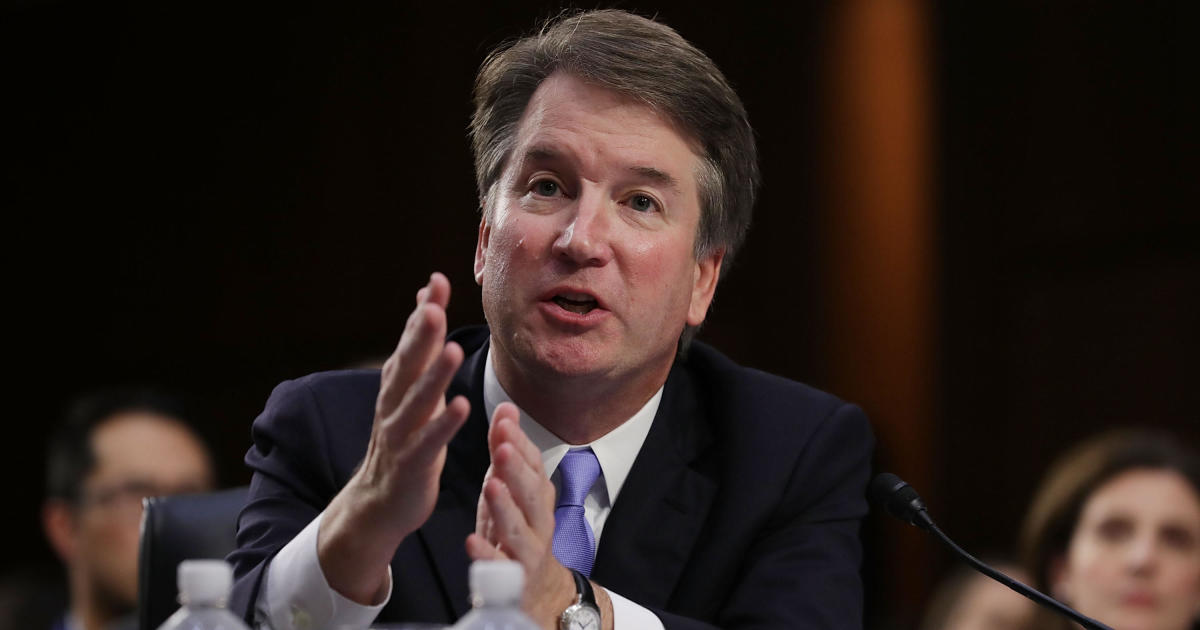 With less than 24 hours to go before embattled Supreme Court nominee Brett Kavanaugh is expected to testify along with his first accuser before the Senate Judiciary Committee, a third woman accusing Kavanaugh of inappropriate behavior has stepped forward.

According to a sworn declaration posted to Twitter by attorney Michael Avenatti, a woman named Julie Swetnick claims she was a victim of a gang rape at a high school party around 1982, and alleges that both Kavanaugh and his friend, Mark Judge, were “present.” In her declaration, Swetnick lays out her memory of Kavanaugh’s alleged behavior at such parties.

“I also witnessed efforts by Mark Judge, Brett Kavanaugh and others to cause girls to become inebriated and disoriented so they could then be ‘gang raped’ in a side room or bedroom by a ‘train’ of numerous boys,” Swetnick alleged. “I have a firm recollection of seeing boys lined up outside rooms at many of these parties waiting for their ‘turn’ with a girl inside the room. These boys included Mark Judge and Brett Kavanaugh.”

“In approximately 1982, I became the victim of one of these ‘gang’ or ‘train’ rapes where Mark Judge and Brett Kavanaugh were present,” Swetnick continued. “Shortly after the incident, I shared what had transpired with at least two other people. During the incident, I was incapacitated without my consent and unable to fight off the boys raping me.”

Kavanaugh, without naming any of the claims leveled against him or Swetnick, declared her claims are from the “Twilight Zone” in a statement provided by the White House.

“This is ridiculous and from the Twilight Zone. I don’t know who this is and this never happened,” Kavanaugh said.

The Senate Judiciary Committee is scheduled to hear from Kavanaugh and Christine Blasey Ford, the woman who claims Kavanaugh assaulted her when they were in high school, Thursday morning. The committee has tentatively scheduled a Friday vote on Kavanaugh’s nomination.

But the second woman accusing Kavanaugh of misconduct, Deborah Ramirez, is also willing to testify publicly, her attorney said Wednesday morning. Ramirez alleges Kavanaugh exposed himself to her at a party when they were both at Yale University.

Judiciary Committee Democrats call for Kavanaugh nomination to be pulled

Following the latest Kavanaugh accuser to step forward, all 10 Democratic members of the Senate Judiciary Committee on Wednesday urged the president to immediately withdraw Kavanaugh’s nomination or order an FBI investigation into all allegations.

“We are writing to request that you immediately withdraw the nomination of Brett Kavanaugh to be an Associate Justice on the Supreme Court or direct the FBI to re-open its background investigation and thoroughly examine the multiple allegations of sexual assault,” they wrote in a statement.

Sen. Jeff Flake, R-Arizona, slammed lawmakers on Capitol Hill for the “toxic” political culture surrounding the Kavanaugh confirmation process and allegations in its wake. He said politicians have “dehumanized” Kavanaugh and his accusers.

“These people are not props for us to make political points,” he admonished. “These are human beings with families and children, people who love them and people whom they love and live for.”  Flake meanwhile said he knows Ford is not part of a “vast conspiracy to smear” Kavanaugh, and that Kavanaugh is not a “sexual predator” as has been alleged in right and left-wing reporting respectively.

Flake said the Senate owes both Kavanaugh and Dr. Ford “a sincere apology, it’s inadequate of course, but it’s a start.” The Republican added that he’s since received threats for supporting calls for Ford to testify on Capitol Hill.

“We have lit a match, the question is do we appreciate how close the powder keg is,” he said.

Mr. Trump, at a gathering of the U.N. on Wednesday, tweeted what appeared to be his response to Swetnick’s declaration, as provided by Avenatti.

“Avenatti is a third rate lawyer who is good at making false accusations, like he did on me and like he is now doing on Judge Brett Kavanaugh,” Mr. Trump tweeted. “He is just looking for attention and doesn’t want people to look at his past record and relationships – a total low-life!”

Kavanaugh, in a statement provided by the White House, said the claims against him never took place, and, without naming her, denied even knowing Swetnick.

“This is ridiculous and from the Twilight Zone. I don’t know who this is and this never happened,” he said.

Senate Minority Leader Chuck Schumer, in a statement sent to reporters, said Republicans should suspend the nomination process and Kavanaugh should withdraw his name.

“Republicans need to immediately suspend the proceedings related to Judge Kavanaugh’s nomination, and the president must order the FBI to reopen the background check investigation,” Schumer said. “There are now multiple, corroborated allegations against Judge Kavanaugh, made under the penalty of perjury, all of which deserve a thorough investigation.

“I strongly believe Judge Kavanaugh should withdraw from consideration. If he will not, at the very least, the hearing and vote should be postponed while the FBI investigates all of these allegations. If our Republican colleagues proceed without an investigation, it would be a travesty for the honor of the Supreme Court and our country.”

Kavanaugh, in written testimony released by the Senate Judiciary Committee, decried the “last-minute smears” leveled against him. It’s worth highlighting that Kavanaugh’s testimony was almost certainly submitted before Avenatti revealed his latest client’s claims.

Here is his written testimony, as prepared and submitted to the Senate Judiciary Committee:

“Mr. Chairman, Ranking Member Feinstein, and Members of the Committee: Eleven days ago, Dr. Ford publicly accused me of committing a serious wrong more than 36 years ago when we were both in high school. I denied the allegation immediately, unequivocally, and categorically. The next day, I told this Committee that I wanted to testify as soon as possible, under oath, to clear my name.

Over the past few days, other false and uncorroborated accusations have been aired. There has been a frenzy to come up with something—anything, no matter how far-fetched or odious—that will block a vote on my nomination. These are last-minute smears, pure and simple. They debase our public discourse. And the consequences extend beyond any one nomination. Such grotesque and obvious character assassination—if allowed to succeed—will dissuade competent and good people of all political persuasions from serving our country.

As I told this Committee the last time I appeared before you, a federal judge must be independent, not swayed by public or political pressure. That is the kind of judge I am and will always be. I will not be intimidated into withdrawing from this process. This effort to destroy my good name will not drive me out. The vile threats of violence against my family will not drive me out. I am here this morning to answer these allegations and to tell the truth. And the truth is that I have never sexually assaulted anyone—not in high school, not in college, not ever.

Sexual assault is horrific. It is morally wrong. It is illegal. It is contrary to my religious faith. And it contradicts the core promise of this Nation that all people are created equal and entitled to be treated with dignity and respect. Allegations of sexual assault must be taken seriously. Those who make allegations deserve to be heard. The subject of allegations also deserves to be heard. Due process is a foundation of the American rule of law.

Dr. Ford’s allegation dates back more than 36 years, to a party that she says occurred during our time in high school. I spent most of my time in high school focused on academics, sports, church, and service. But I was not perfect in those days, just as I am not perfect today. I drank beer with my friends, usually on weekends. Sometimes I had too many. In retrospect, I said and did things in high school that make me cringe now. But that’s not why we are here today. What I’ve been accused of is far more serious than juvenile misbehavior. I never did anything remotely resembling what Dr. Ford describes.

The allegation of misconduct is completely inconsistent with the rest of my life. The record of my life, from my days in grade school through the present day, shows that I have always promoted the equality and dignity of women.

I categorically and unequivocally deny the allegation against me by Dr. Ford. I never had any sexual or physical encounter of any kind with Dr. Ford. I am not questioning that Dr. Ford may have been sexually assaulted by some person in some place at some time. But I have never done that to her or to anyone. I am innocent of this charge.”

Taylor Foy, communications director for the Senate Judiciary Committee, said the committee is reviewing the declaration sent by Michael Avenatti. He did not elaborate.

Wed Sep 26 , 2018
Last Updated Sep 26, 2018 12:38 PM EDT Attorney Michael Avenatti revealed the identity of the third woman to accuse Supreme Court nominee Brett Kavanaugh of sexual misconduct, Julie Swetnick, whom he referred to as “courageous, brave and honest.”  While Swetnick does not accuse Kavanaugh of assaulting her, she does […]