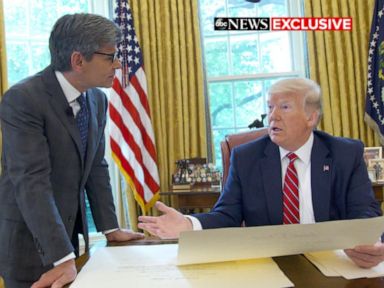 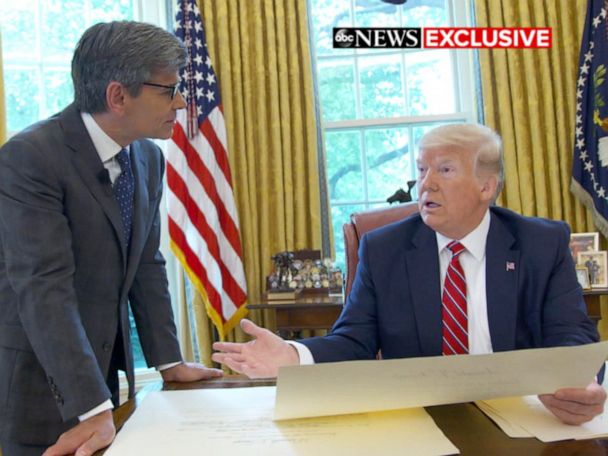 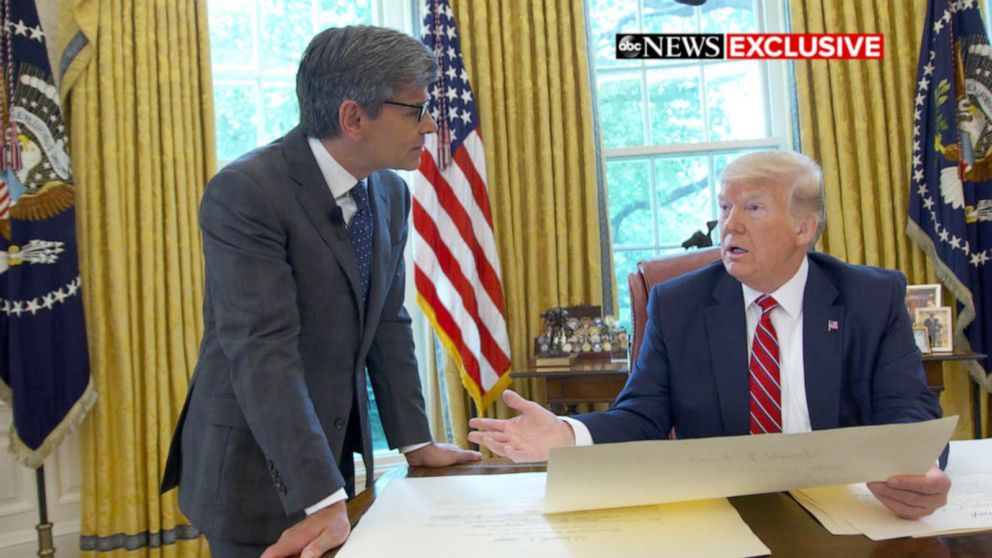 Over the course of two days, ABC News’ Chief Anchor George Stephanopoulos spent 30 hours with President Donald Trump, flying on Air Force One to Iowa, traveling in his armored vehicle called “The Beast,” greeting him in his West Wing residence, embedding in the Oval Office for a day of meetings, and sitting down for a one-on-one interview in the White House Rose Garden.

During an interview Wednesday morning in the Oval Office, President Trump opined on the Russia investigation, telling Stephanopoulos he would consider accepting damaging information about his political rivals from foreign nations.

Below is a complete, unedited transcript of that portion of the president’s exclusive interview with ABC News.

Tune in next week for an hour-long ABC News special, only on ABC — including “ABC News Live,” the 24/7 streaming news channel available on abcnews.com, Roku, Hulu, Amazon Fire TV and Apple TV.

ABC News Chief Anchor George Stephanopoulos: You’re a fighter. You, you, it feels like you’re in a constant kind of churn.

President Donald Trump: Yeah, uh, my life has always been a fight. And I enjoy that I guess, I don’t know if I enjoy it or not, I guess — sometimes I have false fights, like the Russian witch hunt. That’s a false fight. That’s a made-up hoax. And I had a fight that —

Stephanopoulos: –the first line of his report says they had a systematic attempt at interfere in our elections.

President Trump: They did, but not me. And they also said, okay, that we rebuffed them. Okay?

President Trump: Paul Manafort, they have Paul Manafort on taxes and many other things. Nothing to do with our campaign.

President Trump: I don’t know anything about that. What difference does polling information make? It doesn’t matter. He was maybe trying to do something for an account or something. Who knows? But they said specifically that there was nothing to do, and we, in fact, rebuffed them–

Stephanopoulos: –they said there were hundreds–

Stephanopoulos: –what they said is that–

Stephanopoulos: He said he was trying to help elect you. He said that explicitly.

President Trump: Well he might’ve said that after I won because it’s a smart thing to say, okay? Because frankly—

Stephanopoulos: And Mueller says that he’s trying to do that.

President Trump: Mueller said that we rebuffed Russia, that we pushed them away, that we weren’t interested. Read the report.

Stephanopoulos: I have read the report. On that though, your son Don Jr. is up before the Senate Intelligence Committee today, and again, he was not charged with anything. In retrospect though, do you think—

Stephanopoulos: But should he have gone to the FBI when he got that email?

President Trump: Okay, let’s put yourself in a position: you’re a congressman, somebody comes up and says, “Hey I have information on your opponent.” Do you call the FBI?

Stephanopoulos: If it’s coming from Russia you do.

President Trump: You don’t– I’ll tell you what. I’ve seen a lot of things over my life. I don’t think in my whole life I’ve ever called the FBI. In my whole life. I don’t–you don’t call the FBI. You throw somebody out of your office, you do whatever you do—

Stephanopoulos: Al Gore got a stolen briefing book. He called the FBI.

President Trump: Well, that’s different. A stolen briefing book. This isn’t– this is somebody who said, “We have information on your opponent.” Oh, let me call the FBI. Give me a break, life doesn’t work that way.

Stephanopoulos: The FBI Director says that’s what should happen.

President Trump: The FBI Director is wrong. Because, frankly, it doesn’t happen like that in life. Now, maybe it will start happening. Maybe today you think differently. But two or three years ago, if somebody comes into your office with oppo research– they call it oppo research–with information that might be good or bad or something, but good for you, bad for your opponent, you don’t call the FBI. I would guarantee you that 90 percent, could be 100 percent, of the congressmen or the senators over there, have had meetings–if they didn’t they probably wouldn’t be elected– on negative information about their opponent. They don’t–

President Trump: Possibly. Possibly. But they don’t call the FBI. You don’t call the FBI every time you hear something that maybe–now, you see the people. The meeting, it also sounds to me–I don’t know anything about that meeting–but it sounds to me like it was a big nothing. That meeting was a big nothing. But I heard about my son, who is a great young man, going to jail over a meeting where somebody said, “I have information on Hillary Clinton.” She’s the one that should be in jail. She deleted 33–

Stephanopoulos: She should be in jail?

President Trump: She deleted 33,000 emails from–sent by the United States Congress. They gave a subpoena to Hillary Clinton for 33,000 emails. After the subpoena was gotten, she deleted them. That’s called obstruction. And her lawyer should also be looked at because her lawyer–she’s got to have the greatest lawyer on earth because she does that, he did the deleting, supposedly. Not only did they delete, but they acid washed them.

President Trump: Now, that’s called the– no, no. No, no. It’s being investigated I assume now.

President Trump: I don’t know, I stay uninvolved. I stay totally uninvolved and I don’t talk to—

Stephanopoulos: You haven’t asked the Justice Department to take a look into Hillary Clinton?

Stephanopoulos: Your campaign this time around, if foreigners, if Russia, if China, if someone else offers you information on opponents, should they accept it or should they call the FBI?

President Trump: I think maybe you do both. I think you might want to listen, there’s nothing wrong with listening. If somebody called from a country, Norway, “we have information on your opponent.” Oh, I think I’d want to hear it.

Stephanopoulos: You want that kind of interference in our elections?

President Trump: It’s not an interference, they have information. I think I’d take it. If I thought there was something wrong, I’d go maybe to the FBI. If I thought there was something wrong. But when somebody comes up with oppo research, right, they come up with oppo research. Oh, let’s call the FBI. The FBI doesn’t have enough agents to take care of it, but you go and talk honestly to congressmen, they all do it, they always have. And that’s the way it is. It’s called oppo research.

Thu Jun 13 , 2019
This article was originally published on ETFTrends.com. As its name implies, the Global X Millennials Thematic ETF (NasdaqGM: MILN) focuses on investment themes and trends expected to benefit from millennials’ spending habits. That narrow demographic focus is helping, not hurting, the fund, which is up 24% this year. The millennial […]