The Buckeye State has gone in favor of every presidential election winner since Lyndon Johnson defeated Barry Goldwater in 1964.

No Republican has ever won the Oval Office without carrying the state.

That includes President Donald Trump who defeated Hillary Clinton in Ohio by 51.69% to 43.56% in the 2016 presidential election.

In the lead-up to the election four years ago, Clinton topped Trump in many Ohio polls, including the CBS News Battleground Tracker that found the former Secretary of State held a 4% advantage.

Despite their increasing sophistication, polls are surveys. Accuracy is never guaranteed and victory in them is merely a consolation prize when the underdog claims the electoral votes.

The pair spent months visiting voters across Ohio, beginning with Pelley’s trip during the 2016 Republican Convention in Cleveland and culminating with interviews conducted days after the Access Hollywood tape was leaked.

“Back then the pollsters would have told you that Hillary Clinton [was] leading…but as we spoke to voters all over Ohio we began to hear about this groundswell of interest in Donald Trump,” Pelley said to 60 Minutes Overtime about the 2016 election.

Pelley and Schuster returned to Ohio for a follow-up report last week.

“[When] we saw the election results, Scott and I had conversation almost immediately after the elections saying, ‘You know, we’ve got to come back here four years later,'” Schuster said.

For the 2020 version of “Ask Ohio,” Pelley and Schuster interviewed four of the same people that featured in their 2016 report.

Schuster told 60 Minutes Overtime the most telling moment from the 2016 story came from Lisa Tolbert, a Cleveland resident. Four years ago, she told Pelley that she prayed Black voters like herself would turn out to vote, but enthusiasm lacked for Clinton.

Last week, Pelley returned to Tolbert’s porch for a socially distanced conversation about the election.

“I think Biden is a must-win and people know that,” Tolbert told Pelley. “I’m definitely voting against Donald Trump, but I do believe, more so than I probably thought about Hillary Clinton… Joe Biden could do the job.”

Tolbert and her husband are recovering from Covid-19, which is hitting record levels in Ohio. She told 60 Minutes the issues she cares about in this election relate to the economy, Social Security, and what she describes as racism made “acceptable” during the Trump administration.

Tolbert believes those issues combined with a mixture of enthusiasm for the Biden-Harris ticket and a strong motivation to vote Mr. Trump out of office are driving her and her friends to the polls

On the other side of the political spectrum, Pelley interviewed Tommie Jo Brode, who was Tommie Jo Marsilio when the pair met in Portage County, Ohio in 2016.

Brode was an enthusiastic supporter of then-candidate Trump and took her daughter to the inauguration of the 45th president after his victory.

She said she plans to vote for Trump again in 2020.

“I understand that people don’t always like his approach and that he doesn’t come across as soft,” Brode told Pelley last week. “He doesn’t maybe strike us as someone who wants to give out hugs. And I get that. And I want my pastor to give out hugs. It’s not what I’m looking for in my president.”

In 2016, more than 4% of Ohio voters cast their presidential ballot for a third party or write-in candidate.

Ron Smetana was one of those people. The retired Army Lt. Colonel and life-long Republican wrote-in then-Ohio Governor John Kasich in 2016.

“I had never voted for a Democratic presidential candidate and I felt I could not do it at that time,” Smetana told Pelley. “Hillary just did not excite me back then.”

Smetana told 60 Minutes this year he cast his mail-in ballot for Biden. Brode said she plans to vote on Election Day. Tolbert said she may vote early and is going to spend Tuesday as a poll worker in Cuyahoga County.

Ohio may again side with the winner of the presidency in 2020. It would make it 15 consecutive elections where the state has voted for the victor.

What may change in four years’ time is Ohio’s overall influence in the Electoral College system.

According to the Federal Reserve Bank of Cleveland, Ohio’s population grew 2.9% in the 19 years since the millennium, 13.4% less than the national average.

The results of the 2020 census are likely to recalibrate the Electoral College.

The Buckeye State currently owns 18 electoral votes and has since the 2012 presidential election.

It is the fewest Ohio has maintained since 1828, when the state’s 16 electoral votes helped Andrew Jackson defeat John Quincy Adams.

Ohio has never had more than 26 Electoral College votes and last boasted that figure in the 1968 election. It has steadily lost electoral votes following every census since 1970.

If the trend continues, Ohio may maintain its status as a swing state, albeit one that plays a lesser role in the outcome of future presidential elections.

Mon Nov 2 , 2020
Arizona, already tallying early votes, could be one of the earliest swing states called and may be a preview of who will win the rest of the country. John Dickerson reports on how the state has gone from an easy GOP win to a toss-up between Biden and Trump. Free […] 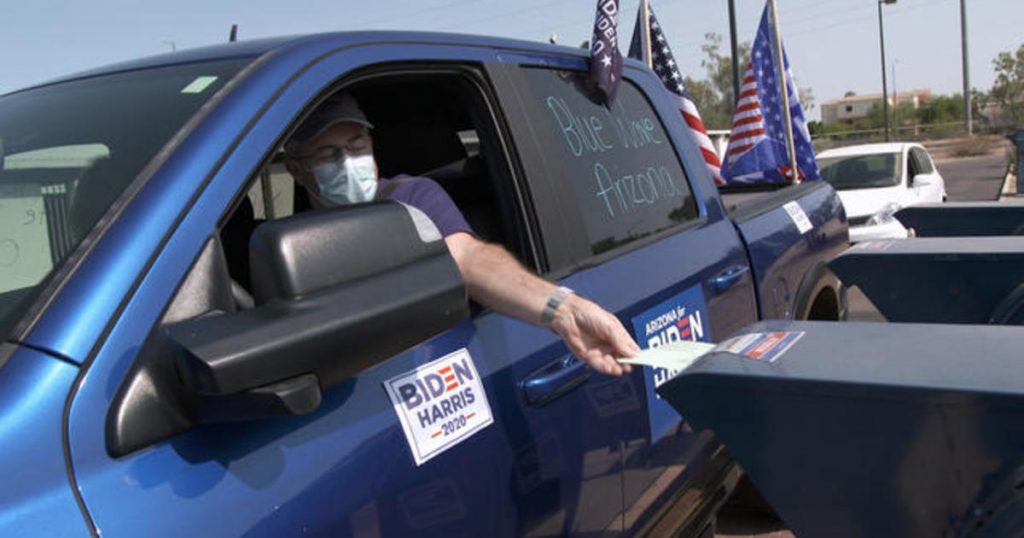