Moscow — Fighting between Armenian and Azerbaijani military forces over the breakaway region of Nagorno-Karabakh continued Wednesday for the 11th day, with no sign of a ceasefire. More than 300 people have reportedly been killed since the long-simmering dispute erupted in violence on September 27.

The two nations have disputed ownership of the mountainous enclave since becoming independent with the breakup of the former Soviet Union. Nagorno-Karabakh is internationally recognized as part of Azerbaijan, but it has been run autonomously by and is primarily populated by ethnic Armenians.

An official from the regional administration said Wednesday that the fighting had already driven half of Nagorno-Karabakh’s civilian population out of their homes.

“According to our preliminary estimates, some 50% of Karabakh’s population and 90% of women and children — or some 70,000-75,000 people — have been displaced,” the Nagorno-Karabakh administration’s rights ombudsman Artak Beglaryan, told the AFP news agency.

The fighting in the Caucasus has ended 25 years of relative peace, delivered by a ceasefire brokered to end a deadly war between the former Soviet republics over Nagorno-Karabakh in the 1990s.

There have been claims from both sides that the other is indiscriminately shelling civilian areas.

Earlier this week, Amnesty International issued a report corroborating information that cluster munitions had been used during the bombardment of Stepanakert, Nagorno-Karabakh’s main city, also known as Khankendi, by the Azerbaijani Armed Forces.

Amnesty called on both Armenia and Azerbaijan to become parties to the Convention on Cluster Munitions, which neither of the two have signed.

The president of neighboring Iran, Hassan Rouhani, warned Wednesday that the Azerbaijan-Armenia conflict could escalate into a regional war. Those fears have been voiced, too, by independent analysts who note, specifically, the lack of any meaningful intervention by the Trump administration in the U.S.

Russian President Vladimir Putin has described it as a tragedy. Putin, who has not picked sides in the conflict and who’s government has sold military hardware to both, said a peaceful resolution appeared “still a long way off, but in any case, we call for a ceasefire.”

Putin spoke Wednesday on the phone with his Azerbaijani counterpart Ilham Aliyev. He had previously spoken with Armenian Prime Minister Nikol Pashinyan four times since the hostilities broke out, according to the Kremlin.

The Russian government has also voiced concern over the involvement of fighters from Syria in the conflict. French President Emmanuel Macron said last week that evidence suggested Syrian jihadist fighters had traveled to the Caucasus through Turkey, which backs Azerbaijan in the fighting.

Armenian officials have said they are ready to engage with mediators of the so-called Minsk group — France, Russia and the U.S., which helped negotiate the last ceasefire over Nagorno-Karahabk — to work toward a new agreement.

Thus far Azerbaijan, with Turkey’s support, has refused to negotiate, demanding instead the withdrawal of all Armenian forces from the breakaway region, and from adjacent territory seized during the war in the 1990s.

Wed Oct 7 , 2020
Hundreds of pro-Armenian protesters gathered outside the Los Angeles Times building in El Segundo, California, Tuesday evening, prompting police to close nearby streets, CBS Los Angeles reports. The protesters appeared to have parked their vehicles on the eastbound lanes of a highway and took over the street in front of […] 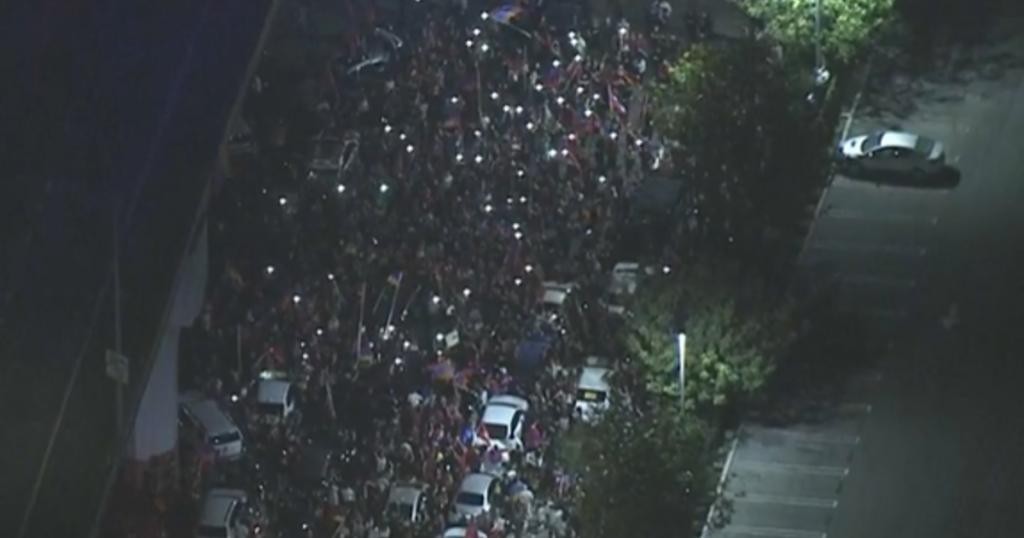