Border Patrol agents on our southern border not only have to worry about protecting themselves from illegal immigrants crossing into the U.S. but also they are getting sick from diseases that the migrants carry.

Recently, Ebola was brought into the U.S. by a migrant fleeing the Democratic Republic of the Congo. Border agents are in constant danger of being exposed to this and other diseases.

The holding facilities on the southern border are over-loaded with sick detainees and now sick agents. Most Congolese are arriving through the Del Rio and El Paso sectors, or regions, which includes Eagle Pass.

Jon Anfinsen is a National Border Patrol Council vice president and based in Del Rio. He has been an agent for twelve years and said the number of people in custody and subsequent illnesses among that population is “unprecedented.”

Anfinsen said, “Scabies, chickenpox — we had one case of the mumps here in Uvalde. I wanna say we had measles — plenty of the flu, plenty of colds, body lice, just assorted. And some of these things, they spread like wildfires when you get into a cramped holding cell. It happens.”

He also said, “It’s not so much the workload. It’s the constant illnesses. We have a lot of agents who are sick. The other day I talked to agents from four different stations. And every single one of them had a cough.”

Anfinsen continued, “I’ll go and I’ll help process. There was one day I spent processing and we had like 40 Guatemalans and Hondurans, and most of them had some kind of cough. And sure enough the next day, I’m sick — for a week. It’s become the new normal, and you gotta just keep going and do your job because you can’t just not process them.”

Overcrowded conditions makes for a breeding ground of disease. It is rather difficult to quarantine the diseases as they are determined and so the cycle continues as illegal immigrants and border agents keep getting sick.

Measles was declared eliminated (absence of continuous disease transmission for greater than 12 months) from the United States in 2000. This was thanks to a highly effective vaccination program in the United States.

So now, besides having illegal invaders committing petty crimes and felony crimes, they are bringing diseases into the U.S. that could possibly kill us. There is no cure for Ebola.

According to the Daily Caller, there are at least 22 million people here illegally, which is double the number of previous estimates.

President Trump has made some progress in connection with Mexican and South American governments. Some invaders are actually getting stopped at Mexico’s southern border. Guatemala is taking some migrants in to reduce the numbers of people traveling to reach the U.S. border.

Even with the help of other governments taking in some of these migrants, the cost to the U.S. is overwhelming. The people crossing into the U.S. do not come here with their own money. We all know that it cost money to be housed and to eat. Now, bring healthcare into the mix and the price goes up. On top of this, add in the care for the diseases that these illegal migrants have and spread to U.S. citizens and you have a disaster waiting to happen.

President Trump tweeted out this in December of 2018:

Illegal immigration costs the United States more than 200 Billion Dollars a year. How was this allowed to happen?

Mon Jun 17 , 2019
Twenty-five years ago today, Americans were riveted by the real-life drama unfolding on their TV screens as O.J. Simpson led police on a slow-speed chase in a white Bronco. For anyone alive at the time, it was one of the more memorable moments in recent American history. For Jeff Mailes, […] 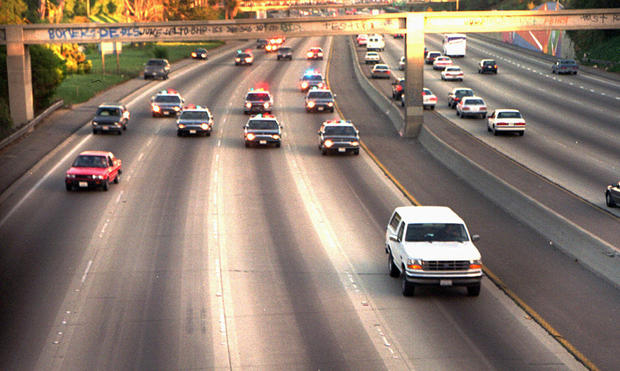