The giant Olympic rings are seen through a tree in the dusk at the waterfront area of Odaiba Marine Park, before the opening ceremony of the 2020 Tokyo Olympic Games that have been postponed to 2021 due to the coronavirus disease (COVID-19) outbreak, in Tokyo, Japan July 8, 2021. REUTERS/Issei Kato

(Reuters) -Sports ruling bodies expressed their disappointment at the decision of Olympics organisers ban spectators from the July 23-Aug. 8 Tokyo Games but understood Japan’s need to take drastic action to curb the spread of COVID-19.

The Olympics will take place without spectators in host city Tokyo, organisers said on Thursday, as a resurgent coronavirus forced Japan to declare a state of emergency in the capital that will run throughout the Games.

Prime Minister Yoshihide Suga said it was essential to prevent Tokyo, where the highly contagious Delta variant of COVID-19 variant was spreading, from becoming a flashpoint of new infections.

People will also be asked not to gather for events on public roads, such as the triathlon, though officials said some venues outside the greater Tokyo metropolitan area would allow small numbers of spectators.

World Athletics, the sport’s governing body, said athletes have become used to competing in stadiums that are not packed but that they would have loved to see “noisy fans” in Tokyo.

“This is disappointing for everyone,” World Athletics said in a statement. “For the people of Tokyo and Japan, the chance to see the world’s best athletes competing in the flesh is an opportunity that does not come around very often.

“We, of course, need to listen to, and abide by, the decisions that individual countries make because this virus is impacting countries and regions differently and they have access to all the information and the science.

“What all of us in sport must focus on is making brave decisions which are usually tough ones.”

The International Hockey Federation (FIH) said it was expecting a capacity of 5,000 spectators and 2,500 spectators respectively on the two pitches.

“Whilst we of course regret that the current sanitary situation prevents from hosting the Games with spectators, we fully understand and support the decision taken by the Japanese authorities and organisers as well as the IOC,” the FIH said.

Husain Al-Musallam, the newly-elected president of swimming’s world governing body FINA, said his organisation had hoped to see the arena filled at a capacity not less than 50%.

“But this decision is of course for Tokyo 2020 and the Japanese authorities,” Al-Musallam told Reuters via email.

“At the same time, FINA hopes to see spectators attending the Games and FINA hopes this can happen by July 23.

“Athletes will still have engaging ways to interact with their home countries and fans, and FINA is confident that aquatics athletes will still provide a great competition for the world to watch from their own homes.”

The move to bar spectators marked a sharp turnaround from as recently as last week, when officials were still insisting they could organise the Games safely with fans in attendance.

Foreign spectators had already been excluded from the Games, which were postponed by a year.

Germany’s athletes’ association Athleten Deutschland said the organisers’ decision was “both reasonable and appropriate” in view of the pandemic.

“The Olympics must not accelerate the infection rates nationally, nor must they become a global superspreader event,” it said.

“Generally, the organisers must spare no costs and efforts as part of their duty of care to reduce the risk of infection for those involved by all means and measures. This also applies to hygiene and safety rules.”

Japan has not suffered the explosive COVID-19 outbreaks seen in many other countries but it has had more than 810,000 cases and 14,900 deaths. The slow vaccine rollout has meant only a quarter of the population has had at least one shot.

Thu Jul 8 , 2021
The major U.S. stock indexes fell on Thursday on concern about the global economic comeback from Covid-19. The losses came as Japan declared a state of emergency in Tokyo for the upcoming Olympics and as countries deal with a rebound in cases because of Covid variants. The Dow Jones Industrial […] 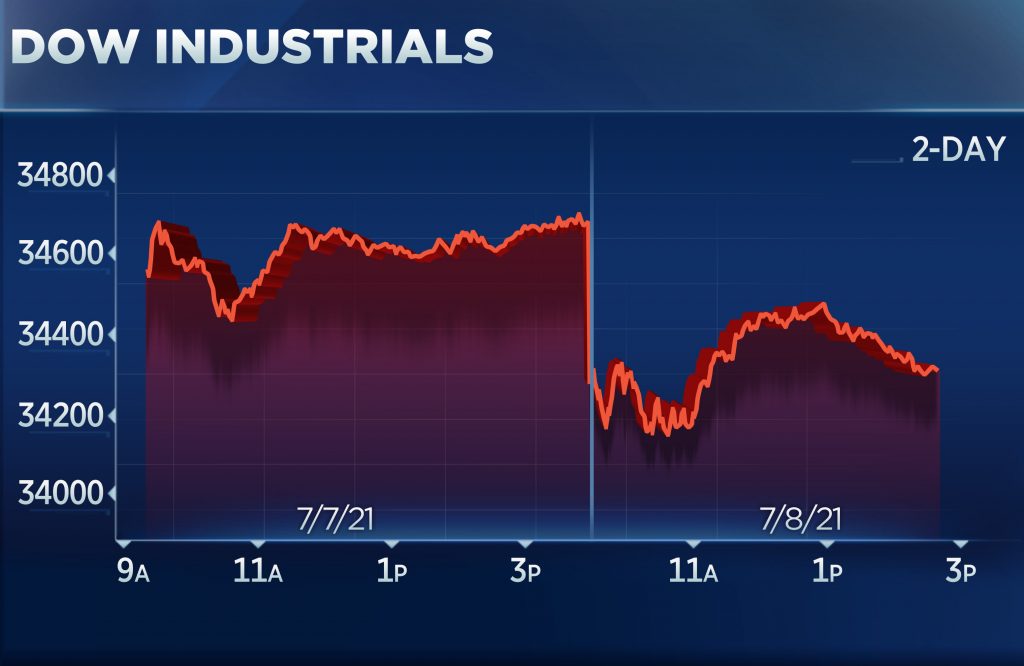