On Thursday Twitter was on fire with Tweets to CNN chief White House correspondent Jim Acosta.

Acosta flew to McAllen, Texas to make a point about a wall or barrier at our southern border. Nice idea but the mockery grew as social media had many who viewed his video on Twitter.

A video of Acosta walking alongside a steel barrier and saying how the area was “pretty tranquil,” was commented on by a large number of people.

Acosta made the case for Trump’s barrier without knowing that he did it.

Acosta didn’t seem to know that shooting the video on the border between the USA and Mexico and showing a steel barrier and the tranquility it brought to the area near McAllen was proving that barriers work.

I found some steel slats down on the border. But I don’t see anything resembling a national emergency situation.. at least not in the McAllen TX area of the border where Trump will be today. pic.twitter.com/KRoLdszLUu

Donald Trump Jr. caught the tweet and replied to it.

I know this might be hard for you to comprehend Jimbo, but the reason why all of Twitter has been mocking you today is because you were at a part of the border WITH A WALL. So yes, of course it was working. Replicate that across the border & we’ll all be safer. #RealNews #ByeBye https://t.co/BtdJ3GcxSV

President Trump weighed in, as well:

In the video in which Acosta posted to his 1.16 million Twitter followers he said, “Here are some of the steel slats that the president’s been talking about. But, as we’re walking along here, we’re not seeing any kind of imminent danger.”

The conservative Twitter users jumped on the band wagon. In a flurry, they pointed out that Acosta had proved the point that walls work.

Acosta fought back by going on his own network and told CNN anchor Anderson Cooper, “Here in McAllen, Texas, this community’s consistently been ranked one of the safest communities in the country. So, the president picked sort of a curious spot to make that case. There’s not a wall all along McAllen, Texas. There are various spots where there’s no wall at all. There’s fencing, there’s chain-linked fencing, I went to an RV park this evening where there are RVs right along the river where people can play shuffleboard and drive around in their golf carts and they’re not being besieged by convoys and caravans of migrants coming in and causing all kinds of crime and mayhem.”

The “Dear Diary” meme was first brought up last year in reaction to a tweet Acosta made about Trump not responding to his plea not to be called the “enemy of the people.”

I stumbled on Acosta’s tweet through a fellow Twitter user. I must admit that I couldn’t help myself and tweeted a reply to Acosta.

Would someone please put some common sense into Acosta’s head? He just proved Trump’s argument. #BuildTheDamnWallNow

In the mean time, as all the fun was happening on Twitter, Trump visited the southern border yesterday and tweeted about his time there:

From the Southern Border…. pic.twitter.com/Vgsf5nEZUH

When I took the Oath of Office…. pic.twitter.com/GDhIqteKpv

I often said during rallies, with little variation, that “Mexico will pay for the Wall.” We have just signed a great new Trade Deal with Mexico. It is Billions of Dollars a year better than the very bad NAFTA deal which it replaces. The difference pays for Wall many times over!

We lose 300 Americans a week, 90% of which comes through the Southern Border. These numbers will be DRASTICALLY REDUCED if we have a Wall!

Walls, fences or barriers; whatever you want to call them, WORK!

'It's a bad precedent' — GOP Sen. Grassley warns Trump not to declare an emergency over the wall

Fri Jan 11 , 2019
President Donald Trump should not declare a national emergency over illegal immigration in order to bypass Congress to get his long-promised wall along the U.S.-Mexico border, Sen. Chuck Grassley, a veteran Republican from Iowa, told CNBC on Friday. Declaring a national emergency could give the president the ability to use […] 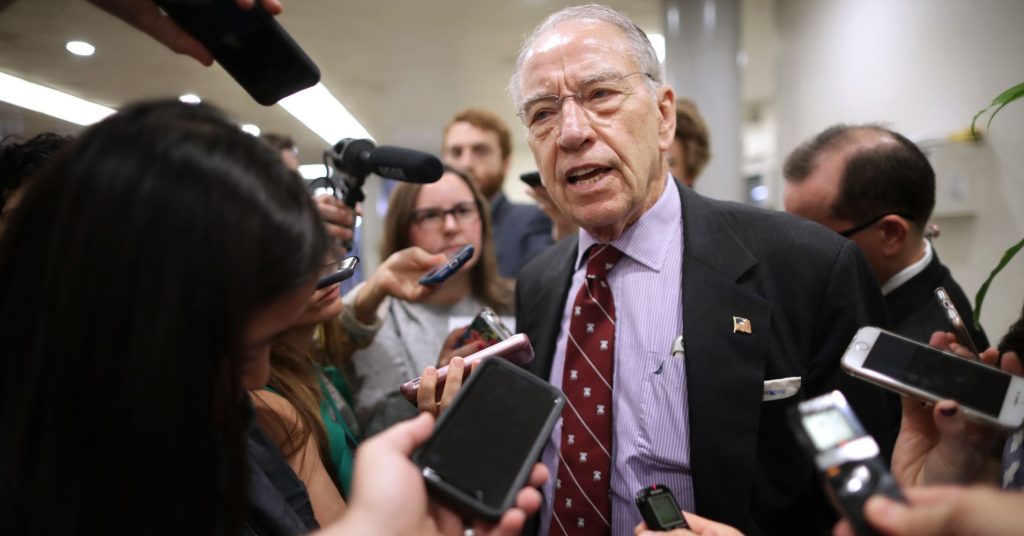