MEXICO CITY (Reuters) – Mexico’s president on Friday urged people to stay indoors to prevent an “overwhelming” spread of coronavirus, taking his strongest stance yet against the pandemic that has killed over 27,000 worldwide and infected nearly 600,000 so far.

“We have to stay in our homes, we have to keep a healthy distance,” Andres Manuel Lopez Obrador said in a 14-minute video on YouTube, warning that the health system may not be able to cope with a mass outbreak of cases, although Mexico has so far registered far fewer cases than other countries.

Mexican health officials reported 717 cases of coronavirus on Friday, up from 585 a day before. The country has reported 12 deaths from the disease so far.

“If we don’t stay inside our homes the number of infection cases could shoot up, and it would saturate our hospitals,” he said. “It would be overwhelming.”

Lopez Obrador also acknowledged that the economic impact of a major outbreak would be worse in the long run if companies don’t send employees home, changing tack after warning earlier that a business shutdown could cause more damage than the virus.

“I know this is going to mean costs, but we could be losing more. Without prevention, the economy could fall even more,” he said. Mexico slipped into recession last year, and the struggling economy was one factor that pushed the president’s approval rating below 50% for the first time in a poll on Friday.

Lopez Obrador has also drawn criticism in recent weeks by holding mass rallies around Mexico and hugging and kissing supporters – even as his own medical experts urged people to avoid physical contact.

Friday’s comments, however, reinforced the president’s graver tone on the pandemic in the past few days. All non-essential federal government activities have been halted and he has taken care to preserve at least a meter of distance with other officials even as he continues his usual travel around the country.

Sat Mar 28 , 2020
March 28, 2020 DUBAI (Reuters) – Iran’s health infrastructure is strong and ready to cope with a possible escalation in coronavirus cases, President Hassan Rouhani said Saturday on state TV. Iran is among the few countries worldwide severely affected by the pandemic. On Friday, the health ministry reported a death […] 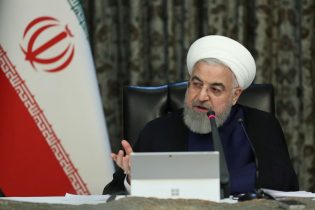