U.S. Speaker of the House Rep. Nancy Pelosi (D-CA) speaks during a weekly news conference at the U.S. Capitol July 1, 2021 in Washington, D.C.

Less than an hour earlier, Pelosi announced that she had vetoed GOP Reps. Jim Jordan of Ohio and Jim Banks of Indiana, two of McCarthy’s five picks, from participating in the House probe of the deadly attempted insurrection by a mob of former President Donald Trump‘s supporters.

Pelosi, D-Calif., said in a statement she made that decision “with respect for the integrity of the investigation” and “with an insistence on the truth and with concern about statements made and actions taken by these Members.”

On the same day of the Jan. 6 invasion, in which hundreds of Trump’s supporters broke into the Capitol to try to stop President Joe Biden‘s election certification, both Jordan and Banks had voted to object to the results of the election.

McCarthy, R-Calif., in a statement called Pelosi’s move “an egregious abuse of power” and accused her of being “more interested in playing politics than seeking the truth.”

“Unless Speaker Pelosi reverses course and seats all five Republican nominees, Republicans will not be party to their sham process and will instead pursue our own investigation of the facts,” McCarthy said.

Jordan, a staunch Trump ally and the top Republican on the House Judiciary Committee, in a brief statement said Pelosi’s actions show that her Jan. 6 probe “is nothing more than a partisan political charade.”

Banks in his own statement said Pelosi “is afraid of the facts.”

“We said all along that this was a purely partisan exercise by the Democrats and Nancy Pelosi’s rejection of me and Jim Jordan shows once again she is the most partisan figure in America today,” Banks said.

But Pelosi earlier this month had picked a Republican — Rep. Liz Cheney of Wyoming — one of her eight members on the panel.

The Democratic-led House set up the select committee after Senate Republicans blocked a bill that would have created an independent commission to investigate the attack. Six GOP senators voted to move forward with the legislation.

Pelosi’s statement Wednesday said she told McCarthy that she would appoint the other three Republican nominees to the panel, and “requested that he recommend two other Members” to replace Jordan and Banks.

When asked at the Capitol why she rejected the two Republicans, Pelosi told NBC News, “January 6th.”

McCarthy had selected Banks to serve as the top Republican on the 13-member panel.

Wed Jul 21 , 2021
Wisconsin Lieutenant Governor Mandela Barnes is jumping into a crowded Senate primary to be the Democratic nominee in 2022. His entrance heightens what is expected to be one of the marquee primaries during the midterm elections.  Barnes joined seven other Democrats who have already launched their Senate bids. On Wednesday, […] 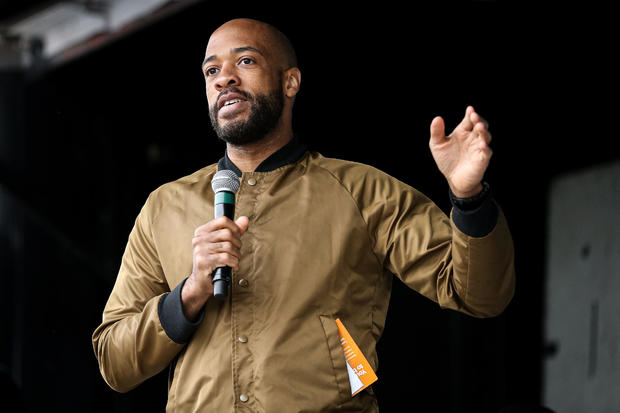