The ‘race card’ was played by Rep. Alexandria Ocasio-Cortez, D-NY, on Wednesday. The freshman congresswoman pulled out her ‘ace in the hole’ and showed her hand to Speaker of the House, Nancy Pelosi.

AOC hit Pelosi hard, suggesting that she was “singling out” herself and her colleagues based on their race.

Congress passed a border funding bill that four Democratic Congresswomen opposed. That caused a feud that has been festering between Pelosi and the four opposing freshmen representatives who are, Ocasio-Cortez, Rep. Ilhan Omar, D-Minn., Rep. Rashida Tlaib, D-Mich., and Rep. Ayanna Pressley, D-Mass..

Pelosi had told the New York Times, “All these people have their public whatever and their Twitter world, but they didn’t have any following. They’re four people, and that’s how many votes they got.”

On Wednesday, Ocasio-Cortez told The Washington Post that the “persistent singling out” by the Speaker may be more than “outright disrespectful.”

AOC went on to say, “When these comments first started, I kind of thought that she was keeping the progressive flank at more of an arm’s distance in order to protect more moderate members, which I understood.”

She continued, “But the persistent singling out … it got to a point where it was just outright disrespectful … the explicit singling out of newly elected women of color.”

On Tuesday Ocasio-Cortez had already said, in an earlier interview, that Congress was using women and minorities as “bargaining chips.”

She said, “When it comes to women of color in Congress, particularly the freshmen, it’s that we both have encountered and represent communities that have been auctioned off and negotiated off for the last 20 years. And we’re over it.”

AOC continued, “We see in these negotiations all the time— it’s like fighting for black communities or policies that help women. They’re bargaining chips. And they’re the first chips that are reached for in any legislative negotiations.”

Those comments have enraged Pelosi. On Wednesday, she slammed back with, “You got a complaint? You come and talk to me about it. But do not tweet about our members and expect us to think that that is just okay.”

There is apparently, a feud going on in the House of Representatives. The four progressives are not in alliance with Pelosi. They don’t listen to others who have been in government for a lot longer than they have been.

Some may say that this is appealing and that people should think for themselves and not just go along with the established Politian. Pelosi is more comfortable when she is in control of those around her and doesn’t like when she is put behind the eight ball.

The family feud in the Democratic party doesn’t seem to be ending anytime soon. Pelosi and the group of four don’t seem to be on the same page. Is Pelosi out of touch with her own party? Maybe, she is.

Personally, I’m not taking sides. I don’t agree with either side. Let them bicker and waste their energy.

It is my opinion that when the unity in a party is destroyed, the power of that party is at stake. Look at the Republicans. The GOP has different views within it. There are Libertarians who have their own way of thinking and there are Republicans, in name only, who vote with Democrats often.

We, on the right, have witnessed lack of unity. The Democrats, however, were pretty much united. That is over now. Fighting within the same party never helped anyone. The right has narrowly avoided destruction because of it and now Democrats are the ones who are divided.

A False Claim About H.R. 8 and a ‘Firearms Registry’

Thu Jul 11 , 2019
Quick Take A viral meme falsely accuses five House Republicans of voting with Democrats to create a “firearms registry.” The bill in question specifically prohibits “the establishment, directly or indirectly, of a national firearms registry.” Full Story  A gun control bill that passed the House 240-190 earlier this year was […] 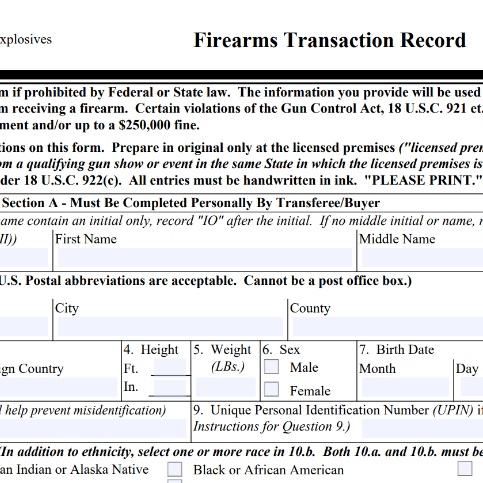