To say it is an interesting time is an understatement.

Incredible technology, mind-blowing opportunities and a limitless future and somehow the greatest country in the history of Man has allowed itself to be “self-quarantined.”

Coupled with the overwhelming hatred and disgust of the “government” in general, the logical mind wonders.

The approval rating for Congress has been reported to be in single digits.

Half of the voting population hates President Trump.

The other half supports him ferociously but hates most of the politicians in his Party.

The mistrust of all politicians is at an all-time high, rightly so, and that’s saying something in a country that historically despises the elected class.

The statement “I wouldn’t trust the government to wipe my a%$” is shared by many and has now taken on quite a new connotation as the lack of toilet paper continues to not swirl the bowl.

“I wouldn’t cross the street to p*ss on you if you were on fire” is another favorite that is directed at today’s politicians and coincidentally also embraces their lack of dealing with the homeless as urine flows daily.

Yet, with all the hatred, distrust, and well earned bile heading in the direction of the “politician” too many Americans were willing to follow any and all commands laid down.

Let me ask this plainly.

If someone has lied to you, targeted you, called you names, allowed your fellow citizens to be murdered by criminal foreign nationals, and buried you in oppressive regulations and taxation, why would you listen to anything they had to say?

Lie to me once shame on you.

That’s where the saying ends because I’m not going to give you another chance to lie to me again yet too many are listening to a government that ALLOWS drugs to flow freely through its borders (and all over the nation) and then offers “programs” paid by taxpayers to provide clean needles and MORE drugs to get off the drugs that they allowed through in the first place.

You are going to listen to “doctors” and pump more drugs into your own body on the word of these “physicians” who at face value appear to have zero knowledge of nutrition or any semblance of Do No Harm in reference to their own bodies?

You are going to hide in your homes because this same government told you a “virus” is among us when the majority of the population urinates and defecates daily and NEVER washes their hands before going out and touching objects, merchandise and food that we all touch, buy and eat?

YOU wash your hands all the time?

I cannot tell you how many times I’ve been in a public restroom to hear the flush of a toilet or urinal and the only other sound is the whoosh of a door opening and closing.

The overwhelming majority of the population does NOT wash their hands every time they use the restroom.

The restaurants even put signs up telling their EMPLOYEES to wash, which doesn’t happen much, let alone every time.

Most Americans use the restrooms in their homes multiple times and maybe do the “spritz and shake” with one shot of agua from the spigot.

We may be the most inoculated humans on the planet from this disgusting practice but it occurs hundreds of millions of times EVERY DAY.

Stop with the drama.

We have Vietnam Vets who clawed their way through jungles, losing brothers daily, who are now living with horrific pain, including Agent Orange, provided by the same lying government and these American Heroes don’t say a word.

We have children dying from Leukemia that smile and brace themselves every day for a pain and mortality rate the Coronavirus will NEVER come close to.

You’ve been sitting at home eating too much, watching Netflix and screaming about your government check while the rest of us have been out there working, protecting, and keeping the economy moving so you can binge watch Game of Thrones for the tenth time.

I can hear you Libs and whiny RINOS now.

But, but the Governor, the Mayor, the President said that we should all stay home.

So he’s your President NOW?

Aren’t you all supposed to be in Canada?

For the record they said all people who aren’t ESSENTIAL should stay home.

You just proved what the taxpayers have known all along.

You are NOT essential.

From this point on stay put.

You’ll do less damage from your parents/grandparents/brothers/sisters/drug dealers couch or you sixties retreads listening to your Jerry Garcia records. Stop hoarding all the supplies.

Those of us you are counting on to keep the lights on, need to be able to eat and do that other thing you apparently do fifty times a day.

Oh and one more thing.

The easiest and furthest reaching”stimulus” would be to remove all forms of Federal Income Tax from the Individual for a six-month period.

You want to see an explosion of the Invisible Hand, take the vice-like grip off the American Worker and Small Business Owner’s neck.

Trillions more in debt makes everything worse and sending $1000 checks to people who don’t work already has a name and it isn’t stimulus.

It’s called Food Stamps and the only thing it’s “stimulating” is Cuomo Virus.

Sun Mar 29 , 2020
The coronavirus is rapidly surging throughout the United States, with some small rural counties leading the country in per capita rates of confirmed cases, according to a CNBC data analysis.  Rural counties like Gunnison County, Colorado; Blaine County, Idaho; and Summit County, Utah have all been struggling with a recent […] 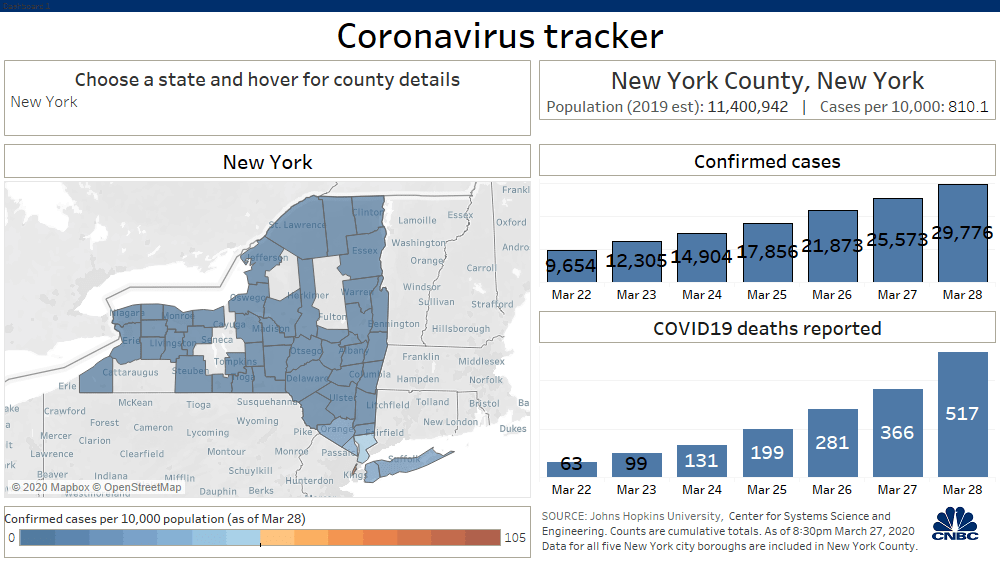