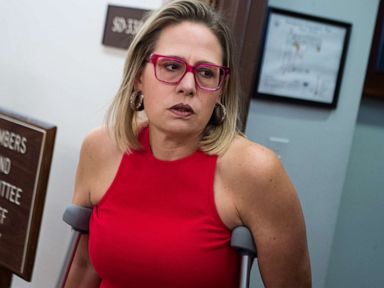 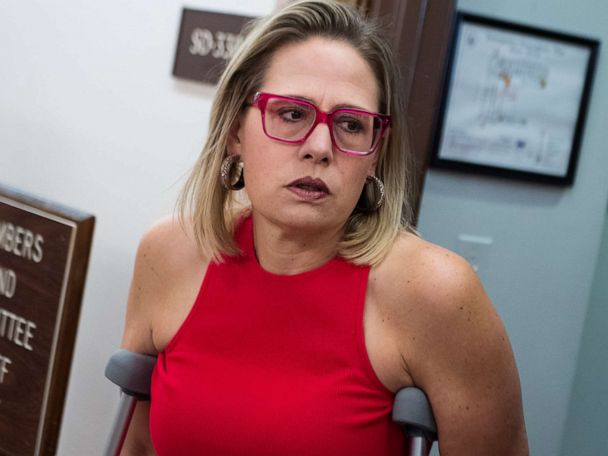 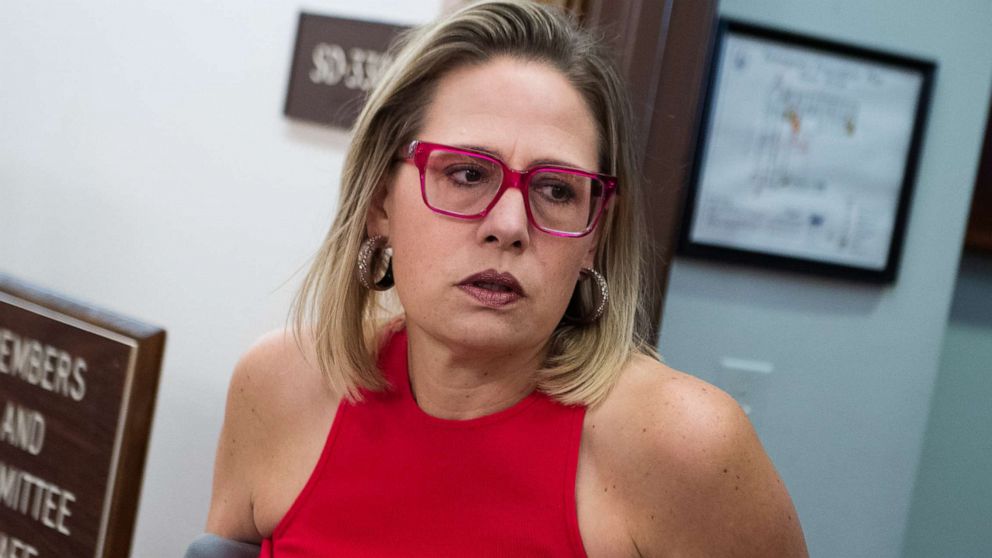 Sen. Kyrsten Sinema, an Arizona Democrat, is clapping back after she was videotaped and chased into a school bathroom over the weekend by a group of pro-Biden agenda activists, confronting her over her objections holding up Democratic efforts on Capitol Hill.

President Joe Biden also weighed in on the encounter, when asked on Monday, calling it not appropriate but also “part of the process” for someone without Secret Service protection.

Sinema, in an earlier statement on Monday, called the display caught on video and posted online “no legitimate protest” and “wholly inappropriate.”

She claimed activists entered Arizona State University, where she was teaching, using “deceptive” and “unlawful” means.

“After deceptively entering a locked, secure building, these individuals filmed and publicly posted videos of my students without their permission — including footage taken of both my students and I using a restroom,” the statement said.

While she wrote she supports the First Amendment, she shunned the protest — by a group she doesn’t name but claims to have met with several times since she was elected to the Senate.

“Yesterday’s behavior was not legitimate protest. It is unacceptable for activist organizations to instruct their members to jeopardize themselves by engaging in unlawful activities such as gaining entry to closed university buildings, disrupting learning environments, and filming students in a restroom,” she wrote.

Video posted to Twitter on Sunday by the organization Living United for Change in Arizona or LUCHA, showed people chanting at and chasing the first-term senator into a bathroom, pressing her to support Biden’s Build Back Better agenda and progressive immigration policy.

LUCHA co-directors Tomas Robles and Alejandra Gomez said in a statement to ABC News that Sinema has shown “zero interest to engage with her constituents or meet her colleagues halfway on critical legislation.”

“Sinema’s constituents have not been granted access to her office, they have been ignored, dismissed, and antagonized,” they said in an email on behalf of the organization. “We will continue to do the appropriate thing: listen to people across Arizona about what they need to thrive, meet our community where they are, fiercely advocate on their behalf, and meet the moment!”

The confrontation comes as the moderate Democratic senator, along with Sen. Joe Manchin, D-W.Va., continue intraparty negotiations on the topline number for a larger social spending package to accompany the already Senate-passed $1.2 trillion infrastructure bill.

“In the 19 years I have been teaching at ASU, I have been committed to creating a safe and intellectually challenging environment for my students. Yesterday, that environment was breached. My students were unfairly and unlawfully victimized. This is wholly inappropriate,” Sinema continued.

Sinema’s statement ended by putting the onus also on elected officials to foster a healthy environment for politics.

“It is the duty of elected leaders to avoid fostering an environment in which honestly-held policy disagreements serve as the basis for vitriol — raising the temperature in political rhetoric and creating a permission structure for unacceptable behavior,” she wrote.

Biden was asked about the recent protests facing both Sinema and Manchin in his remarks on Monday about the debt ceiling.

“Joe Manchin had people on kayaks show up to his boat to yell at him. Senator Sinema last night was chased into a restroom. Do you think that those tactics are crossing a line?” a reporter asked.

“I don’t think they’re appropriate tactics, but it happens to everybody,” Biden replied. “The only people it doesn’t happen to are people who have Secret Service standing around them. So, it’s part of the process.”

White House press secretary Jen Psaki attempted to clarify at a later press briefing that Biden was agreeing with Sinema that free speech is fundamental to democracy but also that the confrontation was “inappropriate and unacceptable.”

“The president believes that — maybe he shorthanded it, but he wanted to make that clear this morning,” Psaki said.

“The safe and intellectually stimulating environment she’s worked to create during the years of teaching at ASU was breached. That’s inappropriate and unacceptable, and I think the context of what happened here is important, despite the fact that, of course, we stand for — the president stands for — the fundamental right of people to protest,” she added.

She said it was clear the White House condemned the behavior.

Biden, asked earlier if Sinema has given the White House a topline number for the social package — somewhere between $1.5 trillion and $3.5 trillion — said, “I’m not going to negotiate in public.”

But he did draw an apparent line of us-vs-them when it came to Sinema and Manchin.

“I was able to close the deal on 99% of my party,” Biden said, on nearly getting his infrastructure and social spending bills across the finish line. “Two. Two people.”

As the video of Sinema went viral on Twitter over the weekend, accumulating more than five million views by Monday, pundits of all parties united in agreement that the behavior crossed a privacy line.

Tue Oct 5 , 2021
Ahead of the 2020 election, Facebook implemented safeguards to protect against the spread of misinformation by prioritizing safety over growth and engagement. It rolled back those defenses after the election, allowing right-wing conspiratorial content to fester in the weeks leading up to the January 6 riot at the U.S. Capitol, […]