“I’ve read your columns for years and both of your novels. Recently one of your posts popped up on facebook as a memory. It was as though you wrote it yesterday and this was years ago. It’s quite clear you have the pulse of America. How serious is this virus?”

Depends on your perspective.

The Federal Government thought it was so serious they sent money to the Kennedy Center.

Andrew Cuomo believes it is so serious he isn’t using the ventilators sent to him while flashing his nipple rings.

Californian parents obviously believe it is serious as their children roam the State in packs.

The reality of this “virus” and any other viruses out there is simple.

They’ve been with you since you were born and they will be with you until you die.

More than likely this particular strain has been in the United States since December and the overwhelming population in most cities has already come into contact with it many times.

Their bodies either accepted it, fought it off, or disregarded it completely.

This happens every year and people do indeed die from a wide variety of viruses that cause other complications such as respiratory and bacterial issues.

In the past this was measured and catalogued as the Flu.

Note to all the Liberals, RINOS and drama queens reading this now who can’t do math.

Whether you believe this or not is irrelevant nor do I personally care as some positives have occurred in my own life due to millions of you attempting to hide from EVOLUTION and the evolutionary process.

Traffic is lighter. Lines are shorter. People are standing back at incredible distances from others.

Something I’ve done and required my entire life.

In essence my contact with others is down dramatically.

Those of you who were truly able to keep yourself from coming into contact with the ChinaVirus, Corona or COVID 19 are now behind the curve of humans like myself and the tens of millions of us in America who continued to work, save, and be beneficial to others.

Our  bodies engaged the virus and the other unknown strains of viruses that science cannot track or explain and assimilated it into our DNA.

Through the evolutionary process we are now stronger than you.

Not that this is new news.

Those who stand and fight in the face of danger, perceived or otherwise, are always the strongest and will always persevere over those who tuck tail and run.

This is a guarantee in life because of one reason.

One cannot win if one doesn’t play the game.

Those that hide and/or play Mean Girls on Social Media are the weakest of the bunch and will succumb to any real pressure.

God help those hiding now if something SERIOUS were to take place.

Thank you Dear Reader for the question and I will add something else.

The reason this is happening is because our current society is ill.

Too much time is spent burning the rods and cones staring at the television, computers, and cell phones. The brain(s) must be utilized and exercised properly in order to function at its optimum level.

Nutrition is at an all-time low as too many are carrying so much extra weight their glands are suffering greatly which leads to auto-immune and behavioral issues.

Drugs and alcohol are literally killing the human body on a daily basis and through this multiple week “panic” alcohol sales have risen dramatically.

This unto itself shows that those humans either don’t understand how their immune systems work or don’t care.

All of these choices show a pattern of apathy, stupidity, ignorance or a combination of them all and are the reason America is currently struggling so mightily under the weight of debt, corruption and lies.

When the Surgeon General turns to Kylie Jenner for help it isn’t just Houston that has a problem.

The world is on tilt.

Stand up and get back in the game.

Nothing is guaranteed to anyone.

Not today, not tomorrow, not next week.

For those who profess to have put your lives in the hands of God you sure have a funny way of showing it.

“Lord, you said that once I decided to follow you, you’d walk with me all the way.
But I have noticed that during the most troublesome times in my life there is only one set of footprints.
I don’t understand why when I need you most you would leave me.”

The Lord replied:
“My precious child, I love you and would never leave you.
During your times of trial and suffering, when you see only one set of footprints, it was then that I carried you.”

These are NOT troublesome times.

You live in the greatest country in the history of Man.

Get up and walk on your own.

Sun Apr 5 , 2020
Over the past few weeks, coronavirus has taken the lives of thousands of Americans. But it’s also had dire impacts on the U.S. economy — delivering a devastating blow for hundreds of thousands of restaurants, stores and other small businesses across the U.S., which find themselves suddenly cut off from […] 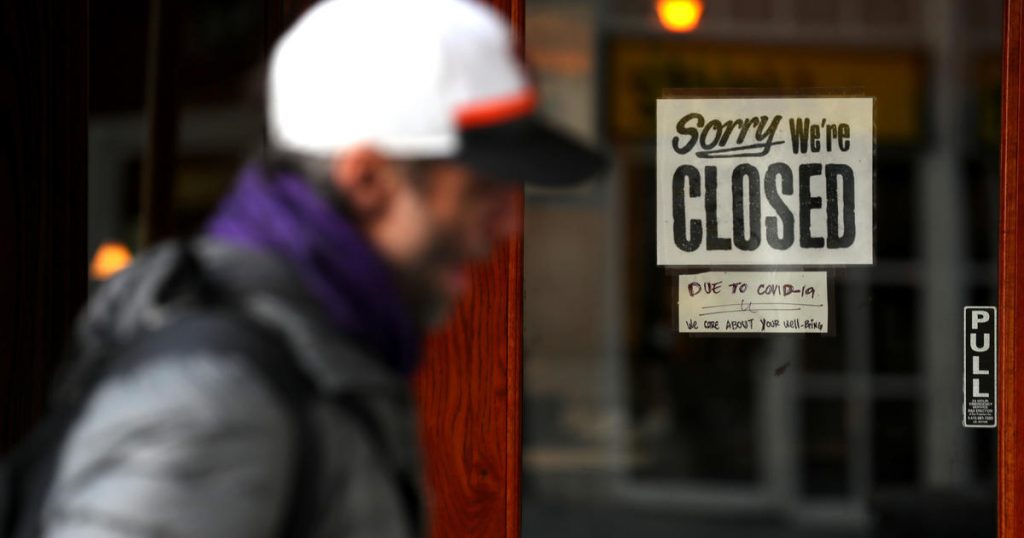