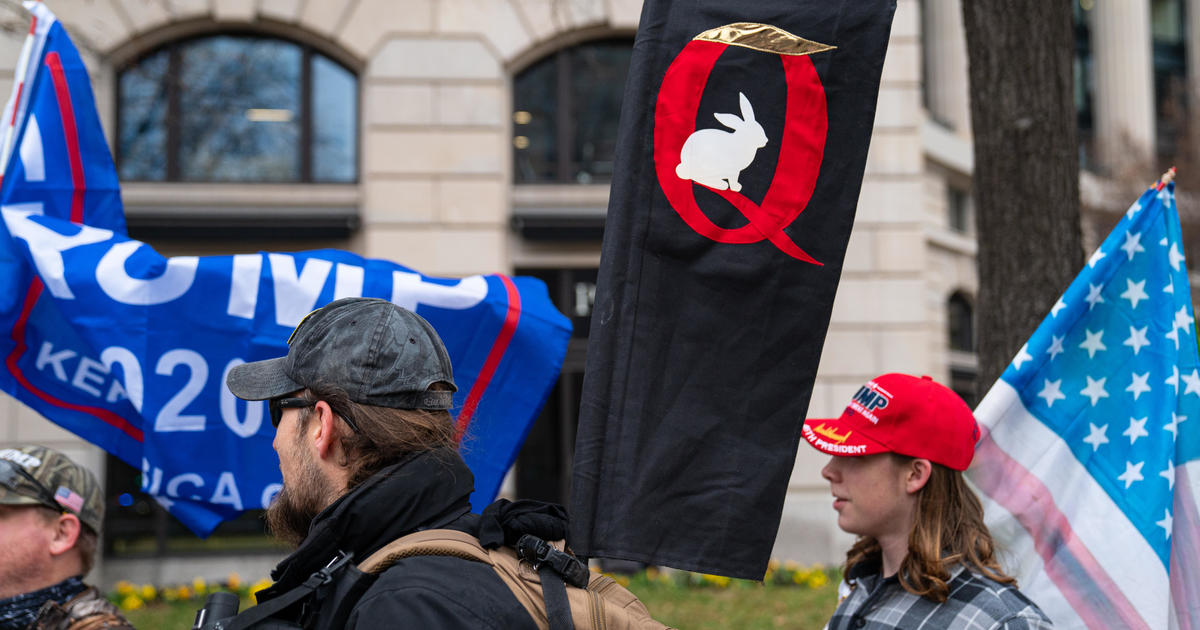 In 2017, after becoming enthralled with American politics while studying in the U.S., Australian Jitarth Jadeja fell under the influence of QAnon, a debunked and harmful online conspiracy theory. Jadeja said he was drawn into the web of its conspiracies when he started following fringe media figures like Alex Jones;  online message boards like 4chan and 8chan further radicalized him.

“[QAnon is] just such a good story, you know, like this insider leaking secret government information,” Jadeja told CBS News chief Washington correspondent Major Garrett in this week’s episode of “The Takeout” podcast.

QAnon supporters vary in their beliefs, but the general conspiracy alleges former president Donald Trump is key to stopping a ring of Satan-worshipping pedophiles who run a child sex-trafficking operation. It centers around anonymous message board posts by “Q” — allegedly a government employee with a top-secret security clearance — and it ties in conspiracies involving President John F. Kennedy’s assassination, school shootings, “Pizzagate” and the Mueller Report. And QAnon helped propagate former President Trump’s so-called “Big Lie” — that the 2020 election was stolen from Mr. Trump.

Jadeja was a believer for two years, but has since disavowed the cult. He now moderates online forums for former QAnon supporters in search of help for themselves or loved ones who have become followers.

“It was absolutely a drug,” Jadeja said of QAnon. “It just spirals out of control from there because like any drug, you need a bigger and bigger hit to get that high — which is why you need a bigger, more grandiose conspiracy theory.”

Jadeja said he was addicted, “all day, every day for months, just looking and searching for that hit.” By the time he was fully indoctrinated into the QAnon community, Jadeja said that he believed in some of its more outlandish theories, including one that claimed German Chancellor Angela Merkel being Adolf Hitler’s biological daughter.

But after he began investigating some of the outlandish claims made by “Q,” Jadeja realized that it was all a fraud.

“It felt like in the space of one second, the entire universe collapsed in on me,” Jadeja said about the moment he realized QAnon was composed of lies. “I felt like just a brain in a jar with no control…I didn’t know what to think. I was almost like I was rebooting from the ground up.”

Jadeja biggest regret was indoctrinating his dad, who today remains a QAnon believer.

“That is the worst thing that I’ve ever done,” Jadeja said. “So when we were in the cult together, it brought us very close in a way that had never happened before. And I was for the first time in my life, I felt like my dad was giving me a lot of respect.”

His father’s continued belief in QAnon has strained their relationship, he said.

This week’s conversation with Jadeja was also featured in CBS News’ “The Debrief” podcast, which just released a two-part series on disinformation. Part 1 can be found here, and part 2 can be found here.

Fri Feb 12 , 2021
CNBC recently got a tour of Lucid Motors’ new factory in Casa Grande, Arizona, where it will build its luxury electric sedan, the Air. The first phase of the facility was completed in November 2020, about a year from when construction broke ground. Lucid is currently building “release candidates” of […]