As consumers deal with a deluge of streaming video services, an obvious solution is rebundling. We still don’t know which company will be the first to offer a batch of subscription products for a discounted price — similar to traditional pay TV.

The answer is an important one. The aggregator of content is the user’s direct point of commerce — which comes with the perk of consumption data. That’s the ideal position in the digital age, when advertisers follow spending habits.

Unlike cable TV, a digital bundle of services doesn’t need to be restricted to just television. This gives an aggregator the ability to personalize offerings like never before, mixing and matching television, news, e-commerce, gaming, health, and any other service that charges a monthly or annual subscription rate.

The obvious “aggregator 2.0” candidates are the streaming hardware technology companies (Apple, Amazon, Roku) or the cable companies (Comcast, Charter, Altice USA) that have traditionally bundled content. It’s also possible media companies, such as Disney, could embrace bundling by incorporating other programming into their streaming ecosystems.

But now, a couple of U.S. wireless companies are springing out to an early lead: Verizon and T-Mobile.

In the past year, Verizon and T-Mobile have methodically added subscription services to wireless plans. Sometimes the offers are promotions with three-, six-, or 12-month shelf lives. Other times, the subscription offers have no expiration dates.

These bundles aren’t as straight-forward as pay-TV packages, where consumers pay a certain price for an amount of programming. Instead, Verizon and T-Mobile have offered a group of monthly digital subscription services, from video to gaming to telehealth, tied to wireless service packages.

For consumers, the benefit is obvious: Bundles save money.

For content producers, wireless companies offer nationwide marketing reach to boost subscribers. This is particularly important to media companies, which are increasingly being valued by Wall Street on their streaming subscriber counts.

For the wireless carriers, adding exclusive subscriptions to bundles is a key differentiator between Verizon, AT&T and T-Mobile, which offer similar wireless service in many regions throughout the country. The subscriptions decrease churn and encourage usage of their wireless networks — and potentially 5G home broadband, which is still in its early stages of national rollout.

“Adding more personalized subscriptions is a big part of our strategy,” said Frank Boulben, Verizon’s chief revenue officer of consumer wireless. “It fits into our broader mix and match offerings.”

Bump up to $45 a month, and Verizon offers Disney+, Hulu and ESPN+ as part of the package for as long as customers stay with the wireless company, along with 12 months of Discovery+. At $60 per month, Apple Music is included indefinitely. For 5G customers with select unlimited plans, Verizon also offers 12 months of PlayStation Plus and PlayStation Now.

Verizon plans to announce an additional subscription offering next week, according to people familiar with the matter. A Verizon representative declined to comment on the specifics of the promotion.

People walk by a T-Mobile store in San Francisco, California

T-Mobile has countered with a growing bundle of services of its own for unlimited data customers, including free Netflix and free MLB TV. Postpaid wireless subscribers get a 12-month offer for $10 off per month of YouTube TV (typically $65 per month) and streaming TV service Philo, typically $20 per month.

Since early last year, T-Mobile has also offered wireless subscribers a free one-year subscription to the sports journalism site The Athletic, one hour of free Wi-Fi and unlimited texting on flights that use GoGo Wi-Fi, three months of free deliveries on Postmates orders, a six-month membership to MyTelemedicine, and a $1 one-month membership as a Gold Tinder subscriber. Verizon is also considering other monthly subscriptions to further drill down on tailored offerings, including potential retail and telehealth offerings, Boulben said.

“People stream more video on smartphones than anything else,” said Jon Freier, T-Mobile executive vice president of consumer markets. “We’ve looked beyond video to add more value to the mobile experience, with free and discounted music, gaming, in-flight Wi-Fi and even telemedicine. Our focus is on giving customers the best deals from the best partners to deliver the best mobile experience.”

AT&T spent more than $100 billion (with debt) on WarnerMedia in 2018 because it hoped it could give its wireless subscribers unique content offerings by owning the asset.

But those bundled offerings never really materialized. AT&T simply offered its unlimited wireless subscribers free HBO Max. That’s effectively the same thing as what Verizon and T-Mobile were doing with Disney and Netflix, respectively. The only difference was AT&T paid $100 billion for the privilege.

WarnerMedia has arguably hamstrung AT&T from being more aggressive with its content promotions. Verizon added a second streaming service — Discovery+ — to its unlimited packages. If AT&T had offered a second streaming service at a discount, it would effectively have been competing against itself, as AT&T would be promoting a video service that would take eyeballs away from HBO Max — the video service it owned.

This dynamic ultimately pushed AT&T Chief Executive John Stankey to separate WarnerMedia and merge it with Discovery, a decision announced earlier this week. Stankey said during a press conference Monday he expects to continue a partnership with WarnerMedia, which will be led by Discovery CEO David Zaslav, similar to the partnerships Verizon has with Disney and T-Mobile with Netflix.

“Through partnership, David and I intend to continue to work together to make sure HBO Max is part of the AT&T portfolio,” Stankey said. “We kind of get the best of both worlds.”

This echoes the sentiment of Verizon CEO Hans Vestberg, who told CNBC last year he saw no need to buy a media company because of he could offer bundles through partnership.

The venture capitalist Marc Andreesen has credited his former boss, ex-Netscape chief executive Jim Barksdale, with saying, “There’s only two ways to make money in business: One is to bundle; the other is unbundle.”

The biggest story in media for the last two years has been the systematic unbundling of pay-TV.

Disclosure: Comcast is the owner of NBCUniversal, parent company of CNBC.

Fri May 21 , 2021
Demonstrators protest inside of the Capitol building in opposition of House Bill 531 on March 8, 2021 in Atlanta, Georgia. Megan Varner | Getty Images Corporate leaders are now fighting behind the scenes against Republican-supported voting laws they consider too restrictive following repeated attacks from GOP leaders and their well-funded […] 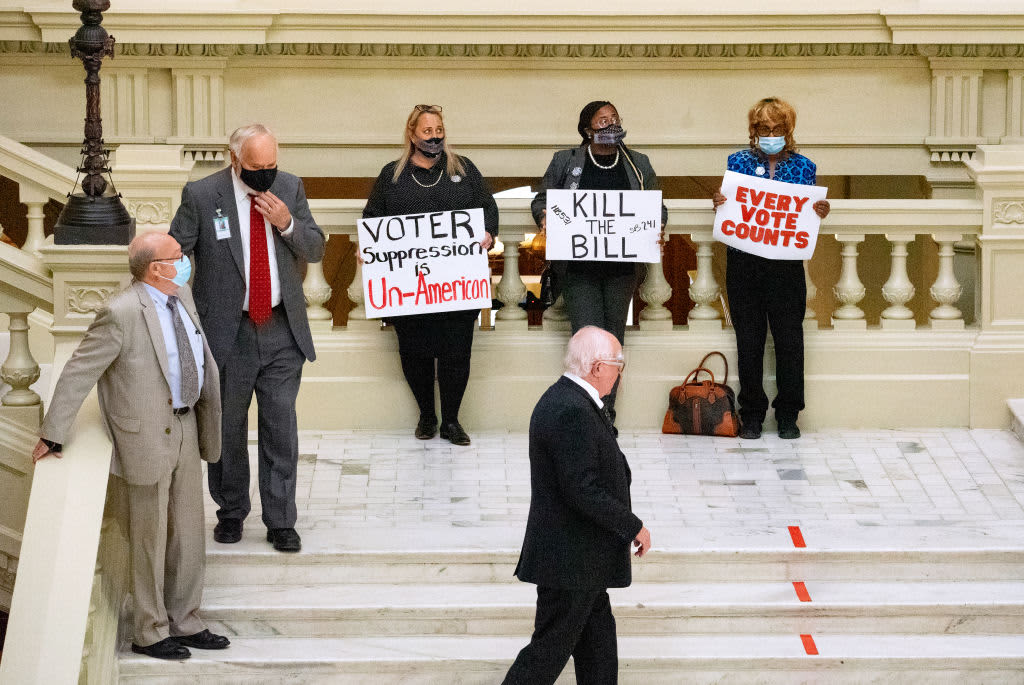